Some musings. I like the modern type face of the current branding, without serifs. I don't like to see cursive fonts. I don't mind the placement at 9 o'clock. I think the font isn't necessarily a match for some vintage style watches, though. CW watches don't have a lot of additional text, which I like.

I think the reason the placement is difficult is the actual length of the name. It's 16 characters including the space, which is a lot for a watch name. It's a branding, rather than a logo.

Maybe the twin flags would be better displayed more positively, printed rather than the delicate emboss/deboss. For watches with applied indices, maybe an applied twin flag would be really smart in red and white ceramic.

The abbreviation Chr. always appears clumsy and very old fashioned to me, which probably is why I like the current version more.

Ultimately if the watch itself is good to use and look at, then the placement of the branding is not so critical to me.

Other name watches (and watch brands) have fewer than 16 characters, and don't attract the negativity. I just can't think of any other watch brand as long as 16 characters. Most are no longer than 6 or 7.

Of names,
Raymond Weil is 12 characters
F.P.Journe is 10
Richard Mille is 13, (and not particularly elegant to me at all, in caps at the top of the dial)
Patek Philippe is 14.

I just looked carefully at the Ball watch logo. At the top, it has Ball, (very short!) but then "official standard" surrounding a logo, with "since 1891" underneath. So old fashioned. Short enough name, but the rest. Probably why I have never ever lingered on a Ball watch.

Even Rolex. "Superlative Chronometer" why bother with superlative? 23 characters. Uses a lot of valuable space on a small watch dial.
Top

You're right, It's probably not even new for me.

Fair enough question from the OP though. I am not a fan of the current logo but I can now accept it for what it is, an inevitable part of the product. Like JAFO points out it is a wordmark. In my eyes this is unnecessary advertising over and above any maker's mark on the watch, and this is what I dislike most of all. I don't wan't another bloke's name on my watch, just like I don't want "Calvin Klein" written on my underpants. Plenty of manufacturers include their name on products now as well as logos and any other devices so I have to be pragmatic in application of my 'rule', but in the CW case I still can't get on with it.

When this logo was introduced it was at 9 o'clock and didn't balance at all, and I think that was their plan for the 9 to be the default position, but as time has gone on and the logo has appeared at 12 it is easier to get on with. The font is still terribly dull though.

One thing I do think is a shame is that the twin flags motif isn't more prominent as it's a clever piece of design and would really lend itself to interesting engraving, relief, etching or whatever.

The OPs point about which mark is which; major revisions (the official ones) such as Mk1, Mk2 are major changes to the specification of the watch such as case, movement or dial design. These may or may not coincide with a logo change - I think some series had a logo change half way through production. In other industries these would be Mk2.5 or similar but I haven't heard that terminology used here.

As noted, the Archive is a great resource.
Top

Im a firm fan of the look, quality, and movement of the watch over the logo by a mile. None offend my eyeballs in any way and as i believe this is an ever growing quality brand, the logo will probably grow and evolve with the company.

Apologies if this has been mentioned or discussed previously in another thread, but im not sure repeatedly changing a company logo on an emerging brand thats trying to establish itself in such a market, is a good idea..? Im not in sales or marketing so i may be completely wrong on that.

I do have a soft spot for the london logo but i cant for the life of me say why..! I feel it looks better on the dress watches.

Everyone is different however, or it would be a boring world.
Top

So I just bought a pre-owned C60 Trident Pro 600 43mm Steel case, White dial on Stainless Steel Bracelet because I prefer the "old" logo. Many of today's largest brands have changed their logos over time so that is not unique to CW
Top

usclassic wrote: ↑Sat Oct 17, 2020 4:17 pm So I just bought a pre-owned C60 Trident Pro 600 43mm Steel case, White dial on Stainless Steel Bracelet because I prefer the "old" logo. Many of today's largest brands have changed their logos over time so that is not unique to CW

So I know it has the flag on the clasp but I have not seen the actual crown but I suspect it will have the W in C, which I like.
Top

usclassic wrote: ↑Sat Oct 17, 2020 4:17 pm So I just bought a pre-owned C60 Trident Pro 600 43mm Steel case, White dial on Stainless Steel Bracelet because I prefer the "old" logo. Many of today's largest brands have changed their logos over time so that is not unique to CW

It sounds like you will have the v.2B logo (CHR. WARD LONDON) 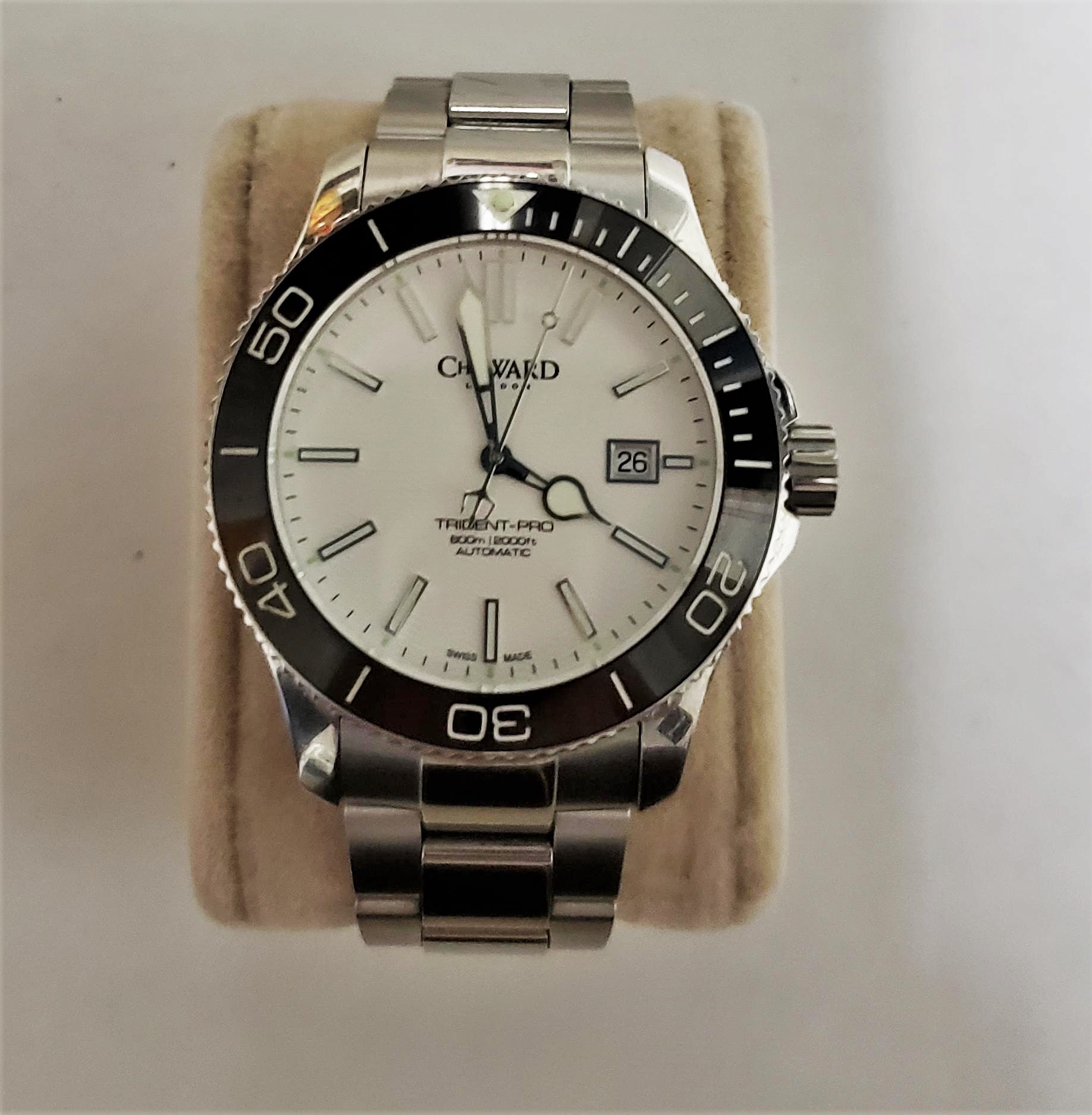 Out of my CWLs only one has the logo at 9, the rest including the C65 Dartmouth have the logo at 12: 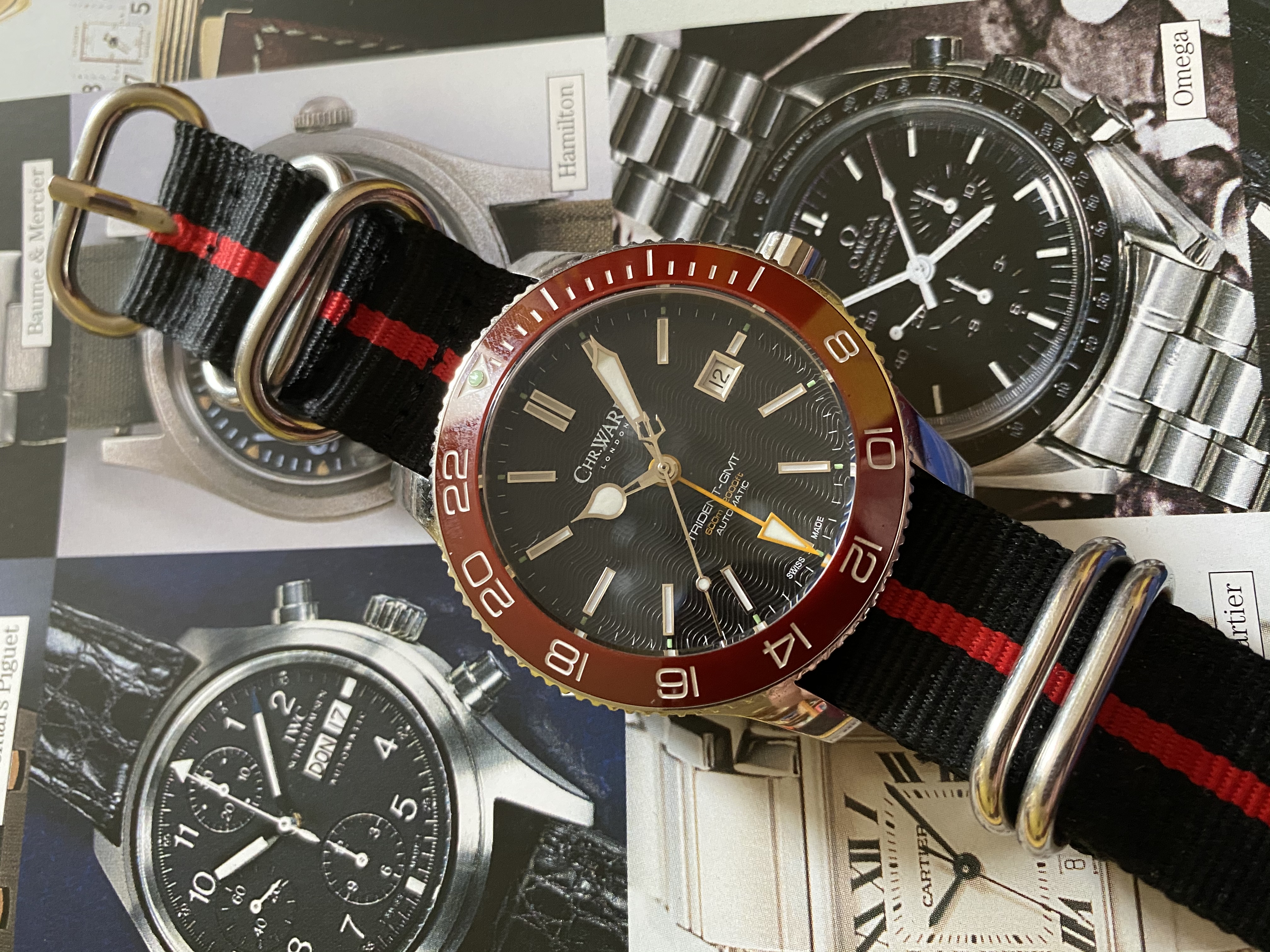 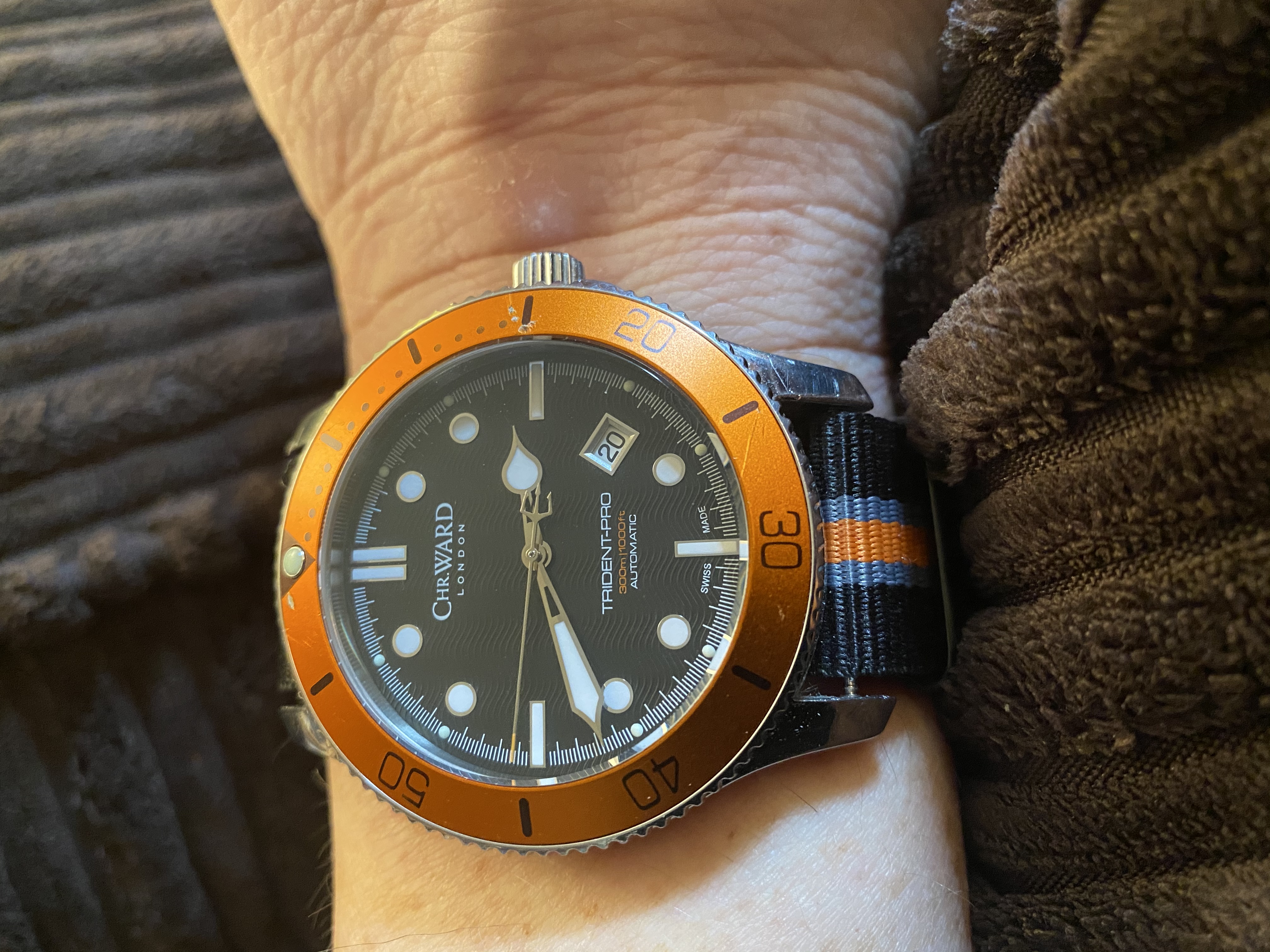 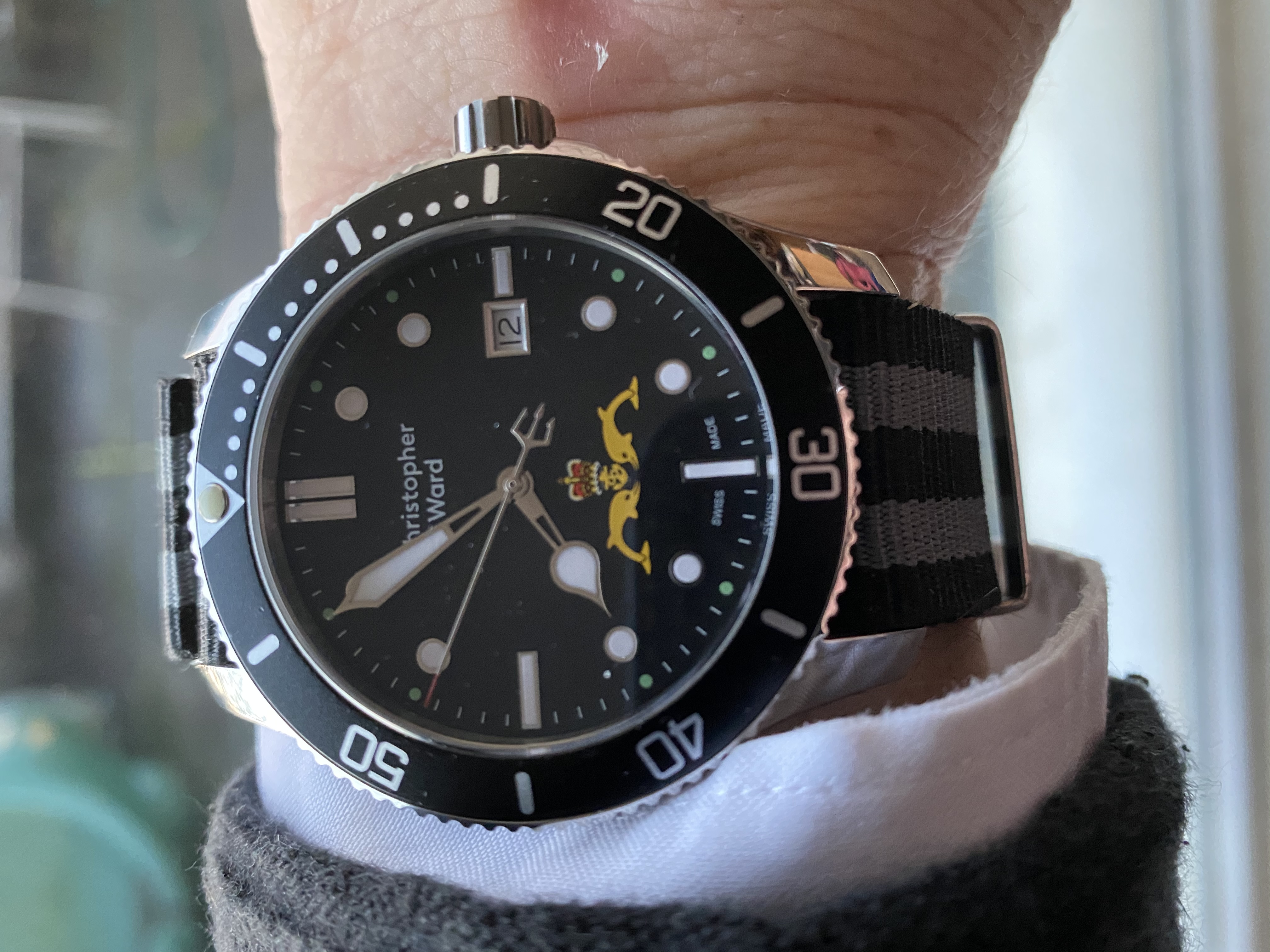 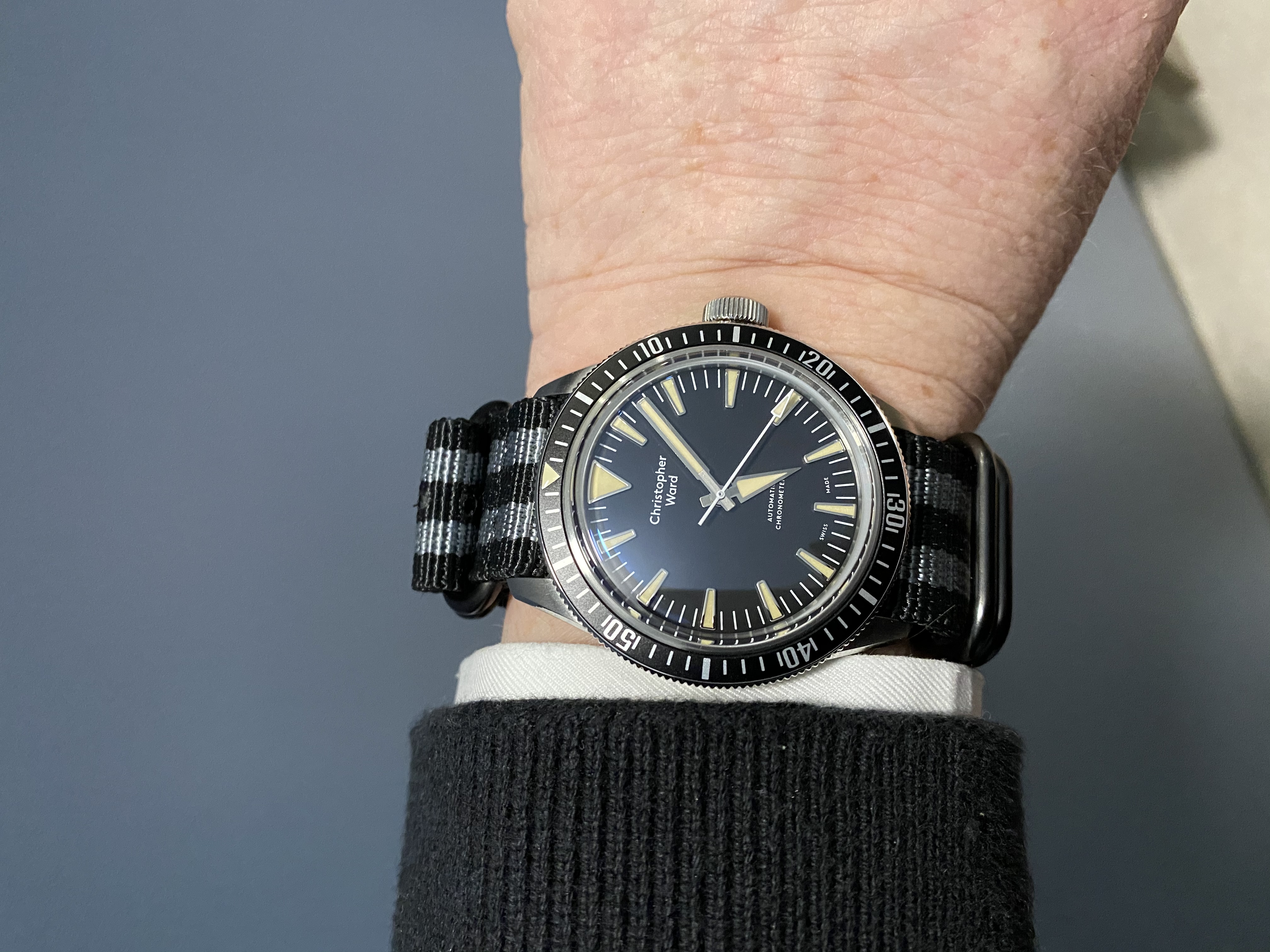 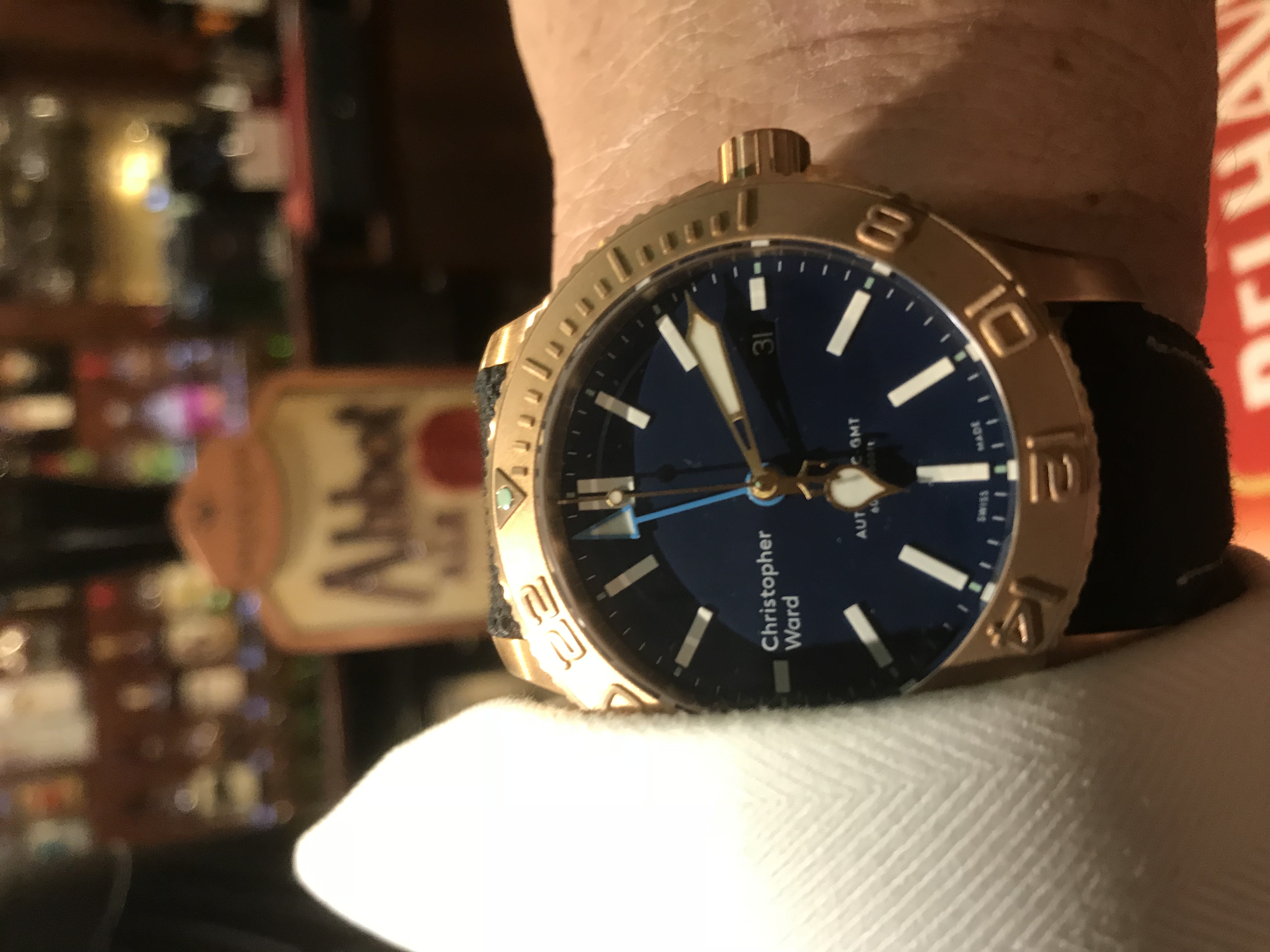 Thanks for clarification.
Top

I look back at the 1st three logos and now think they look slightly ridiculous. Even to my mind this attitude is slightly ridiculous I know. Something about them just annoys the s^^t out of me. Most likely rooted deep with in my early childhood subconscious.

In any case I am very much in favour of the current logo and don't mind it at either 9 o'clock (with a well defined twin flags motif at noon) or solo at noon sans twin flags motif. I also appreciate that the current logo uses the same font at the London Underground for some of their signage (I read this somewhere on the CWL website some time ago).
Bulova Accutron Gemini, C65 Trident Bronze SH21 LE, C65 Trident Black, C65 Trident Diver SH21, C65 Trident Ombre LE, C60 Elite 1000 GMT, C60 Chrono, Tudor Black Bay Heritage Maroon & Black, C60 Trident Bronze Ombré COSC LE Edition
Top
Post Reply
27 posts