I wrote this a couple of months ago, excited at having picked up a black C8 UTC Worldtimer in the summer sale, but I quickly noticed that the automatic winding wasn’t working and the rotor sounded noisy. So within a week it was sent back to Maidenhead for repair, and I received it back yesterday. There were no details of what was done, which is a shame, but it does seem to be working fine now. So, not an auspicious start, but got there in the end. Here’s the review I wrote in August - I haven’t updated it, so it reflects the excitement of a new owner, without the frustration of being without it for the first 7 or 8 weeks.

I was fortunate enough to pick up a matt black C8 UTC Worldtimer in the sale. It was shipped the day after I placed the order, which meant I had to defer the delivery date because I was out of town. 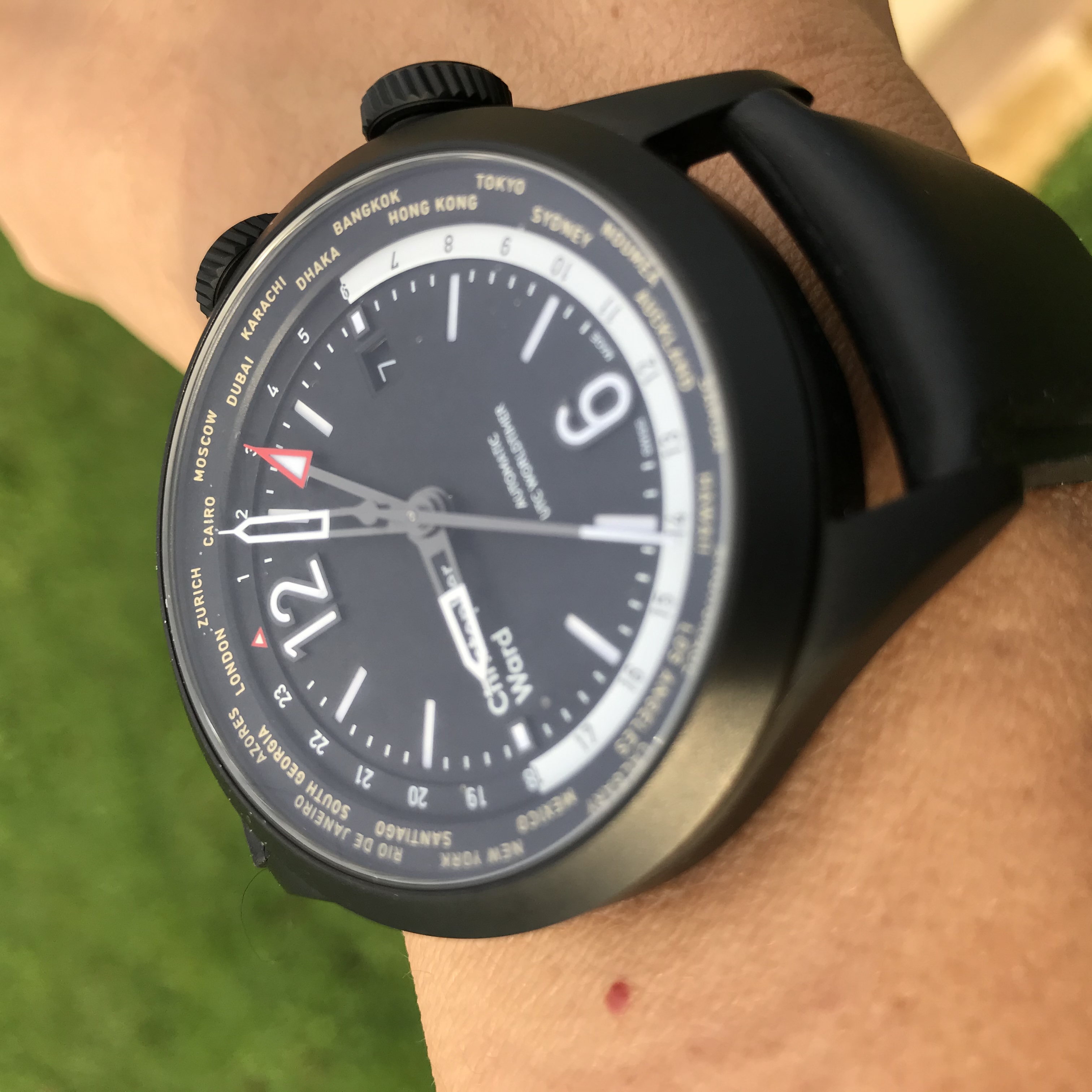 I’ve had it about a week now [Edit: that’s actually still just about true, in early October], so I’ve had some time to decide whether or not to keep it.

I work with a team distributed around the world, and I (used to) travel a lot, so a GMT complication is the most useful to me.

I almost bought a pre-owned example of this same watch from the Sales Corner a month ago, but dithered because of the size (44mm case, 53mm L2L), which is big for my 7 inch wrist. A day later, that watch sold & I’d missed my chance.

After the summer sale had all but dried up, a few additional items suddenly appeared in the clearance section. I’d recently sold a GMT from another brand, and with money in the bank, here was a chance to replace it for a model I’d coveted for a while. Buoyed by the 60/60 guarantee, this time I did not hesitate. I bagged it & paid. Job done. You can’t afford to take a second thought with a sale item.

I am a fan of black DLC; I’d never owned a dual crown watch, & this came on a versatile brown Tiber, which would suit a couple of other watches which have fallen out of favour & need a new lease of life. 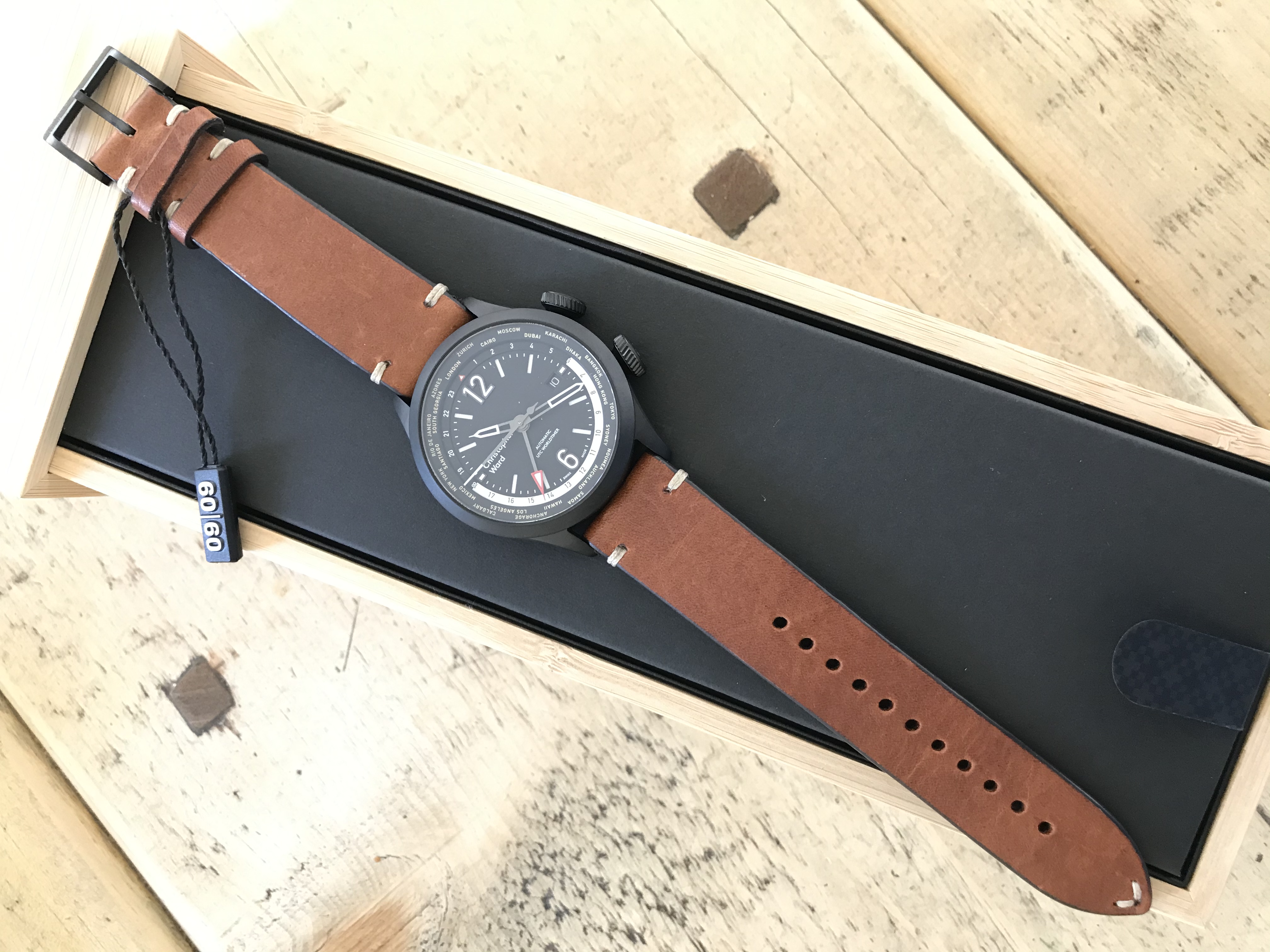 My new C8 arrived in the new packaging - I much prefer it to the old standard presentation box - and as soon as I opened the box I liked what I saw.

The sandwich dial reveals lume below cut out batons at 1, 2, 4, 5 and the corresponding markers on the opposing side, with applied batons at 3 & 9, & oversized numerals applied at 12 & 6. 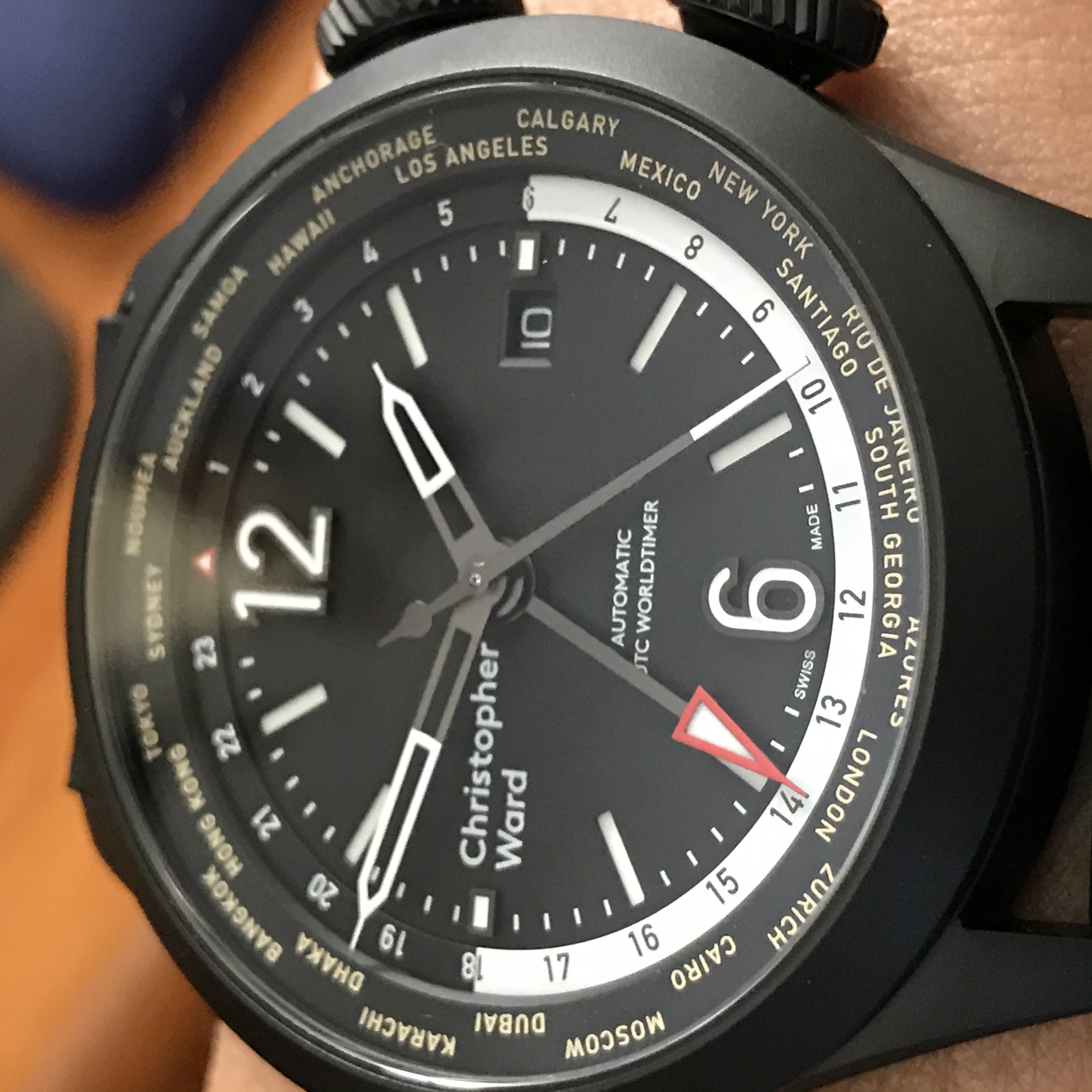 Legibility is perfect & the GMT hand has, in my opinion, the correct colour. The only thing which didn’t immediately impress was the skeleton hands. It’s a minor gripe, which I’m getting over, but it just seemed an odd choice, given that hands with filled lume already grace the C8 Flyer. Why not just use the same hands?

What is unusual about this particular watch is that it doesn’t have a standard production colourway. The production models were sold in brushed steel cases with black dials & white details, while the black cases featured black dials with yellow-brown “fauxtina” details. My version has the “wrong” dial for the case, so it’s clearly a chimera forged from leftover DNA. An official Frankenwatch if you like.

I actually like it better this way, finding the fauxtina a little contrived. I swapped the brown Tiber for a black equivalent, which is a better match for this colour configuration [before settling on a black rubber strap - the large flat case needs good support].

The ETA 2893-2 is reliable and well-known, operating the independent GMT hand to a 24 hour rotation, but the Worldtimer function works in a different way to what I’ve seen before. Ignoring the GMT hand, I can turn the city ring so that my location (London) is aligned to the current hour on the inner bezel, and the same 24-hour scales indicates the equivalent time in any timezone in the world. My colleagues in Mexico are chuffed that -6 favours them rather than my colleagues at our Chicago HQ. 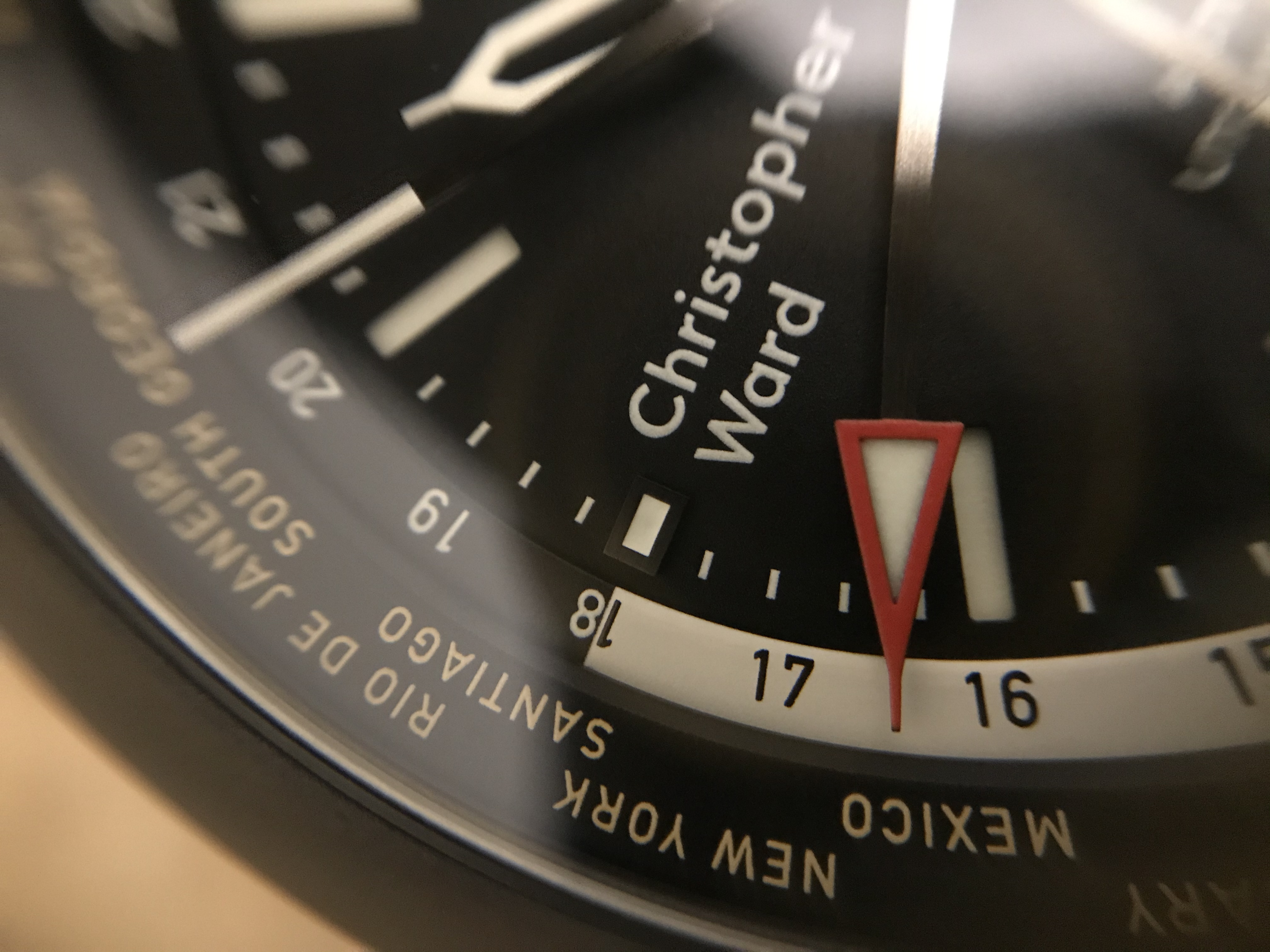 My concerns about size were justified. At 44mm with a slim plain black bezel the C8 does indeed wear pretty large & the two beefy crowns add even more presence, but it needs to be big because of the amount of detail displayed on the dial. It’s large, but it’s wearable.

So, will I keep it? The answer is “yes”, and what with the spell of hot weather we’ve been experiencing, I’ve switched to a Bremont Temple Island rubber strap which matches the stealth look of the black DLC well, and gives me the ability to plunge my wrists under a cold tap when I need to, or, as members in the UK will know, withstand the torrential thunderstorms we’ve been having since [mid-August].

If I ever get back on the road, I can see the C8 playing its part. The inner bezel makes it easy to track the time zones as one passes through airports, and the GMT hand can be set to local time once the final destination is reached.
My name is 0uatiOW, but before you ask, no I don’t.
Top

Nice review - thank you.
I too picked one of these up in the NN sale in the summer and absolutely love it. It is large but doesn’t feel too big on me and, like you say, it needs some presence to fit all the detail on the face. If I had a gripe it would be that all the city names are quite small, but that’s more a frustration with my own ageing eyesight than with the watch itself.
Hope you enjoy yours, now you have it back, as much as I’ve enjoyed mine so far.
CWL
C60 Trident 300
C8 UTC Worldtimer
C65 Trident Diver
C60 Elite 1000 (Blue)
Top

Good review of the C8 UTC. I love your Frankenwatch and I wish mine had the white dial too. It's the little details that please such as using Mexico not Chicago

Great review and photos, Wyatt. Thanks for taking the time to share it.

Great review and great watch! Like you, I'm not into the fauxtina appearance so much and I think this one looks so much better with just the black & white colours. Also, like you I'd seen the one in Sales Corner and had been tempted, but by the time this one popped up in the NN sales I'd convinced myself I don't need a worldtimer anymore!

Nice review Wyatt and good to see that you were able to pick up an end of line 'special'.