Let me present my new acquisition, a Laco Valencia 39. It is a three-hander in a deck watch style, with a small date window at six. The movement is a Miyota 821A automatic which has an Laco engraved rotor and some basic striped decoration. I believe there is an 8315 'upgrade' available if one buys direct, which bring blued screws and a 60-hour power reserve in place of the standard 40. The case is 39mm wide excluding the crown and the lugs are sensibly compact. The handset is black with needle points and the case back is sapphire. The case is brushed all over. The watch's party trick, if you like, is the full-lume dial. It comes on a mid-brown leather strap with contrast stitching and satinized hardware (more about this later). If you fancy a read, carry on, otherwise feel free to skip to the pictures! 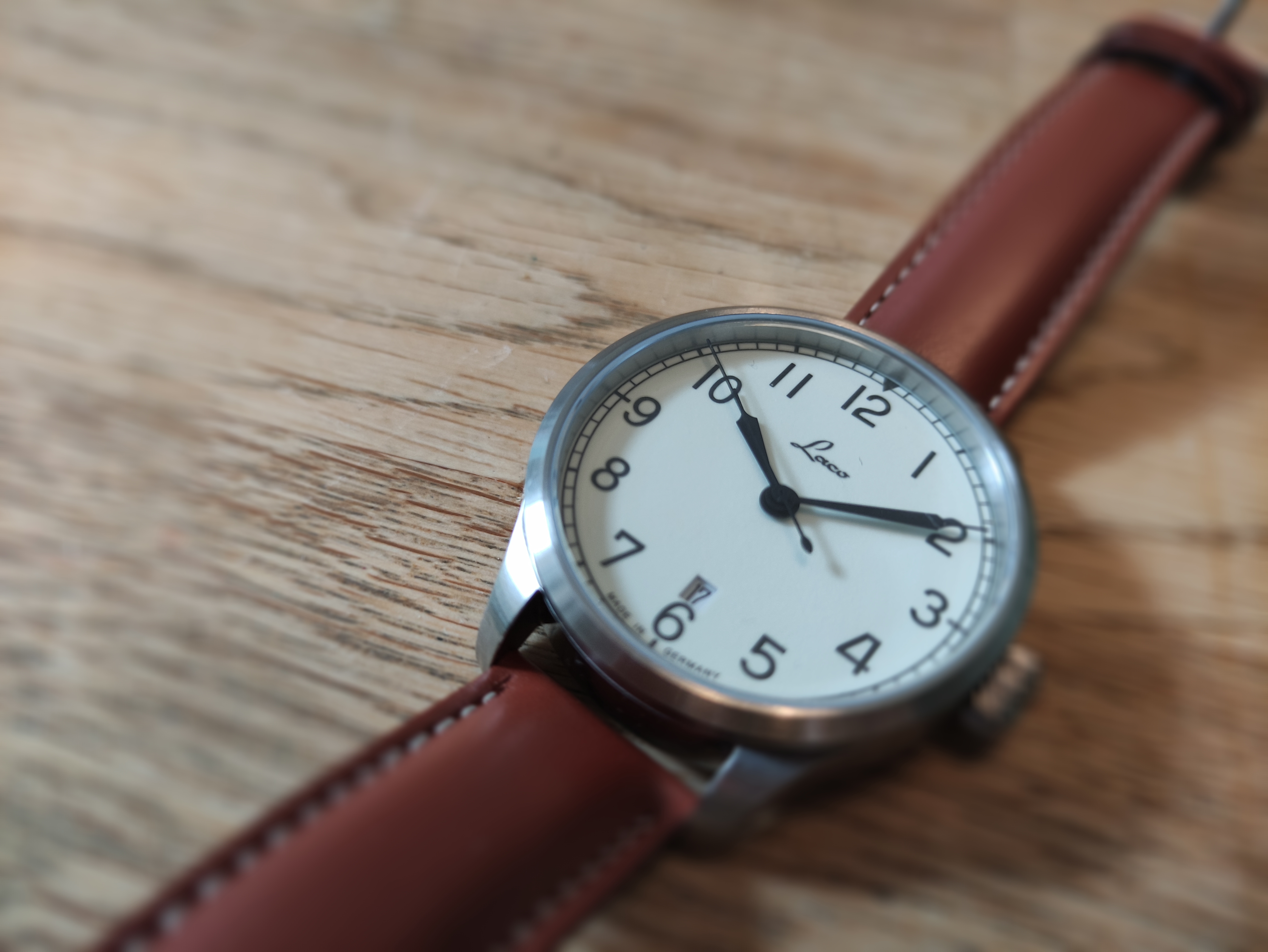 The last watch I bought was my MeisterSinger Metris in March this year and I had absolutely no intention of buying anything else, possibly until next year when I have a multiple-of-ten birthday and therefore a good excuse.

I actually purchased the watch on 1st October. I had had a particularly draining week at work, with a lot going on to adversely affect the wellbeing of colleagues who were, I felt, having to deal with a lot of underserved stress and I was helping them through. Now, this is very unusual for me to end up comfort-buying a watch; a nice bottle of wine perhaps but never anything extravagant.

However I have been really drawn to German watches lately in my internet meanderings - there is something about the design language that really appeals, from Lange to Sinn, Moser to Stowa, and many others. What I really liked about this was the legibility and contrast between the hands an dial, the minute track with extended markers at 3, 6 and 9 and the typeface of the Arabic numerals - the 4 in particular. The 39mm size is about right for me. (Laco also produce a 36mm navy watch but although the size is good, the charm of the dial is missing). 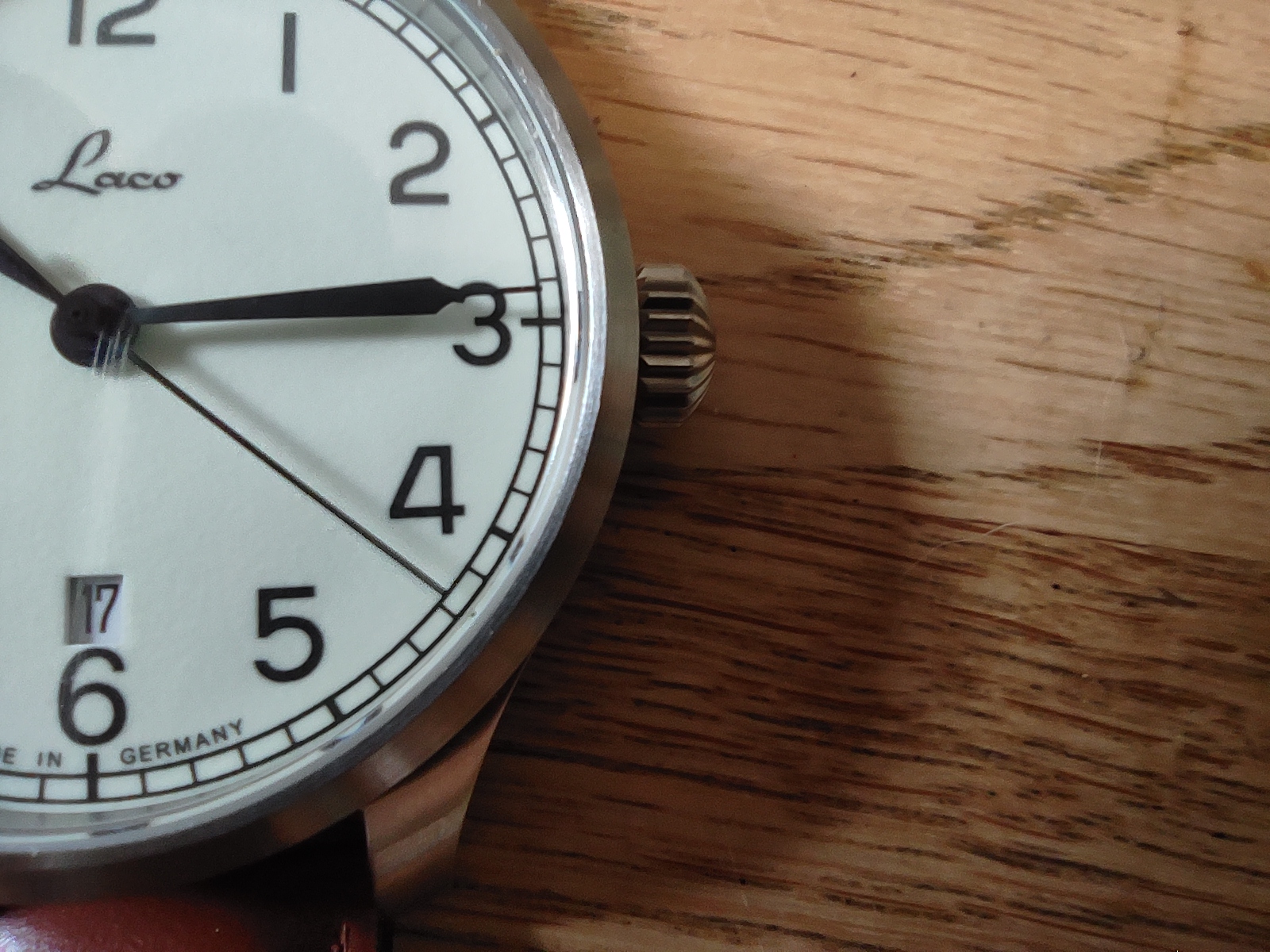 I bought this through TimeByMe, who happened to have a 15% off code available at the time. Without this I wouldn't have pulled the trigger. In fact, the code didn't work when I tried it first time round. I emailed asking if the discount was available on the Laco and I got a reply ten minutes later saying the website had been updated and the code would work. Again, had this been next morning I would have stopped feeling sorry for myself and passed up the opportunity to buy.

So, if you're still with me, the watch arrived by DHL on 6th Oct. I opened it up and...Oh dear, it's a 42mm model. The wrong bloody watch! I emailed TimeByMe and got a reply straight away with a DHL pickup arranged to send it back. I had been really looking forward to having the new watch in my hands and I think I would have just sent it back for a refund if the communication and service from the seller hasn't been so good. Still, I felt rather unsure about whether to be annoyed that such a simple mistake had got through the ordering, packing and shipping checks or pleased that the response had been so swift and seemingly genuinely remorseful and apologetic. They say judge a company on how they handle their mistakes, but still, when your business is despatching watches..

The correct watch arrived yesterday, 16th October, a full two weeks after pressing the button on it. When it arrived I really wasn't sure if I still wanted it but it was Friday and I'd just finished work for the week so decide to give it a go. First impressions were that is was not small but not too big either. The case is by no means badly finished but felt rather unsophisticated and slabby compared to the Metris - but then they are at different price points. 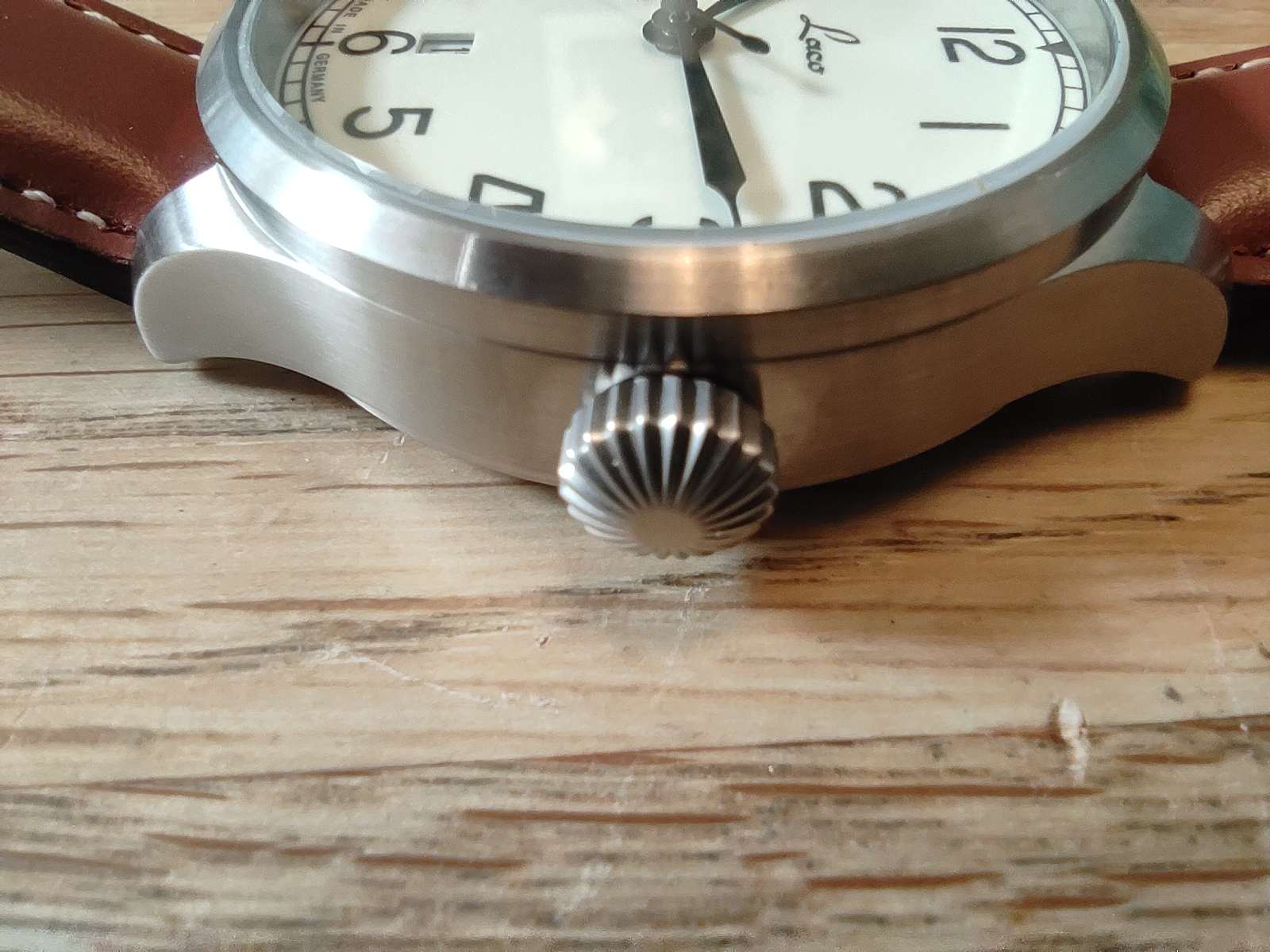 I had never intended to wear the watch on the strap it came on. Once the watch arrived I ordered one of the three or four straps I had been considering pairing it with, and because I didn't expect that to arrive until after the weekend I decided to try on the stock strap. I would say I'm a fairly careful person so I measured up which hole would fit and tried to mould the rather stiff leather to my wrist without creasing it, slipped in the tang and - oh no! 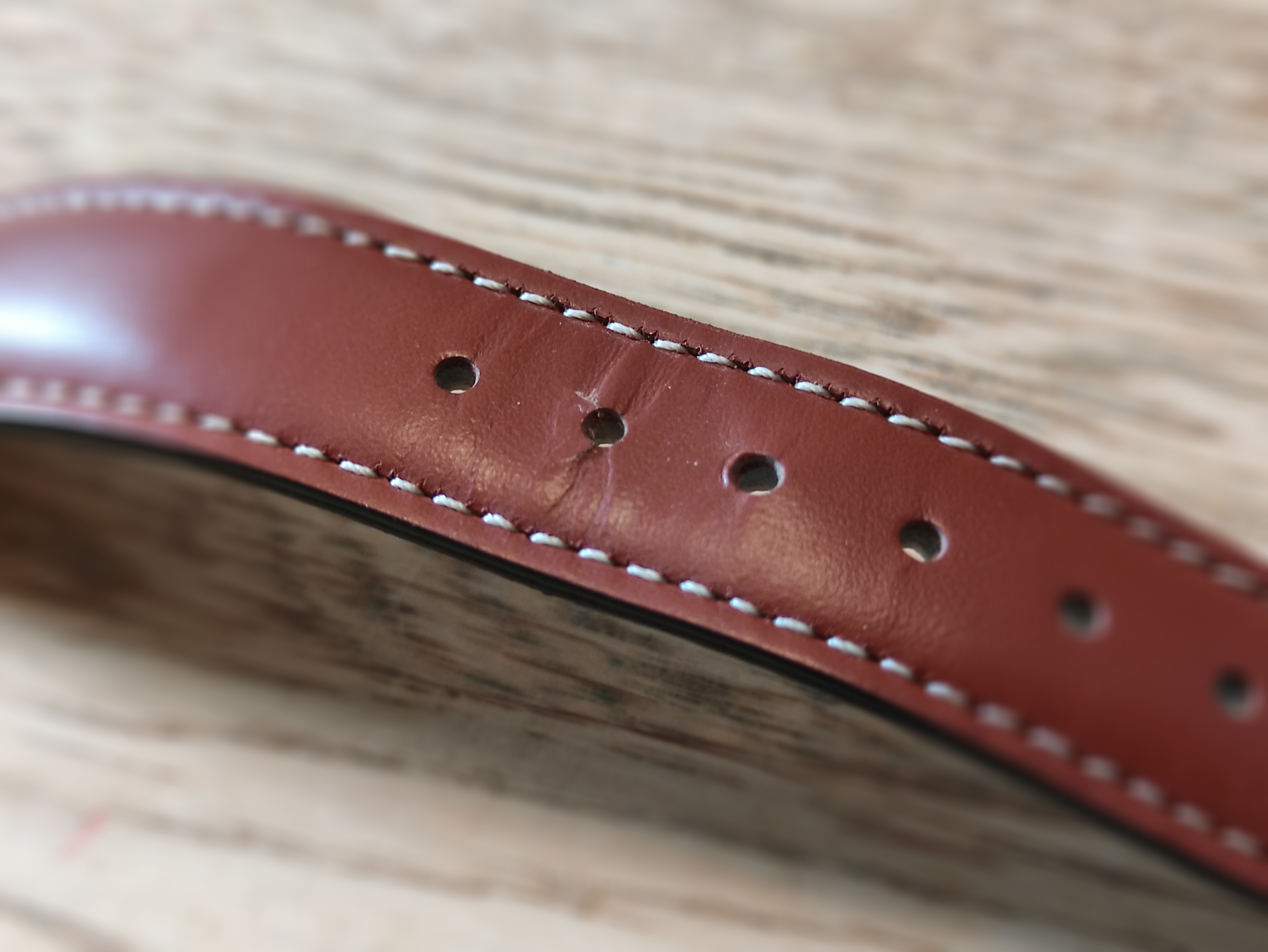 I had managed to bust through the topmost leather facing adjacent to the hole. How the hell had I done that? I took it off and I have to say amount of bend on the end of the tang means it's almost impossible to angle the strap hole and tang so one slides cleanly through the other without bending the strap almost double back on itself. I had a few more goes and I do think it's a poor design choice. Maybe there was some naïvety on my part, maybe not. Most dischuffed. 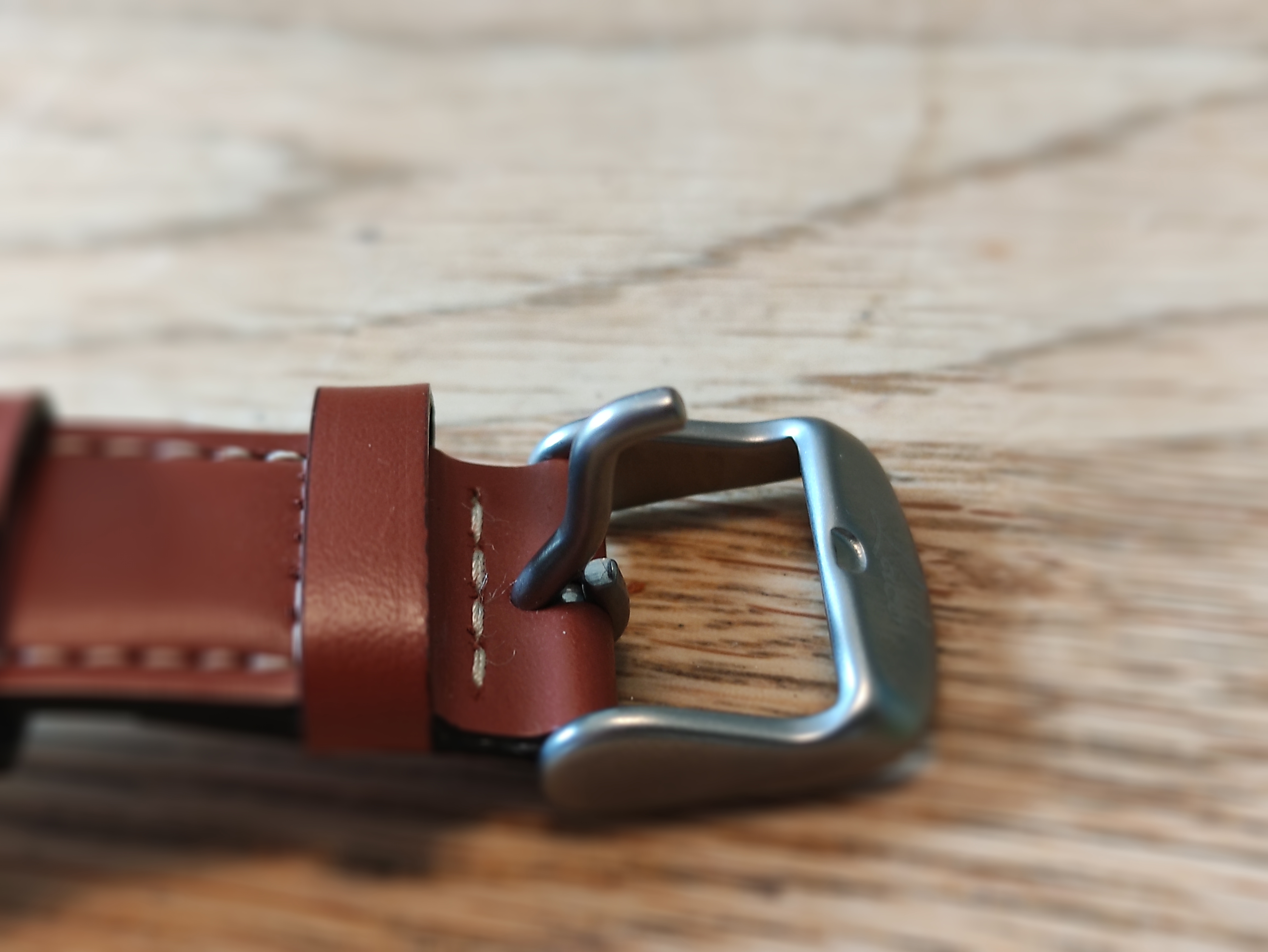 At this point I have a watch i'm not sure I want any more with a mullered strap! Sleep on it. This (Saturday) morning, postman brings the new strap! Wow, less than twenty-four hours and not expected at all. I could have waited and never messed up the original. Still, let's get this on. It's a Fluco grey velour-finish from ukwatchstrap. I wanted something with a bit of texture to go against the flatness of the painted dial, and achieve a simple monochrome look while being a bit more interesting than just black. It's immediately comfortable and a nice Goldilocks thickness. 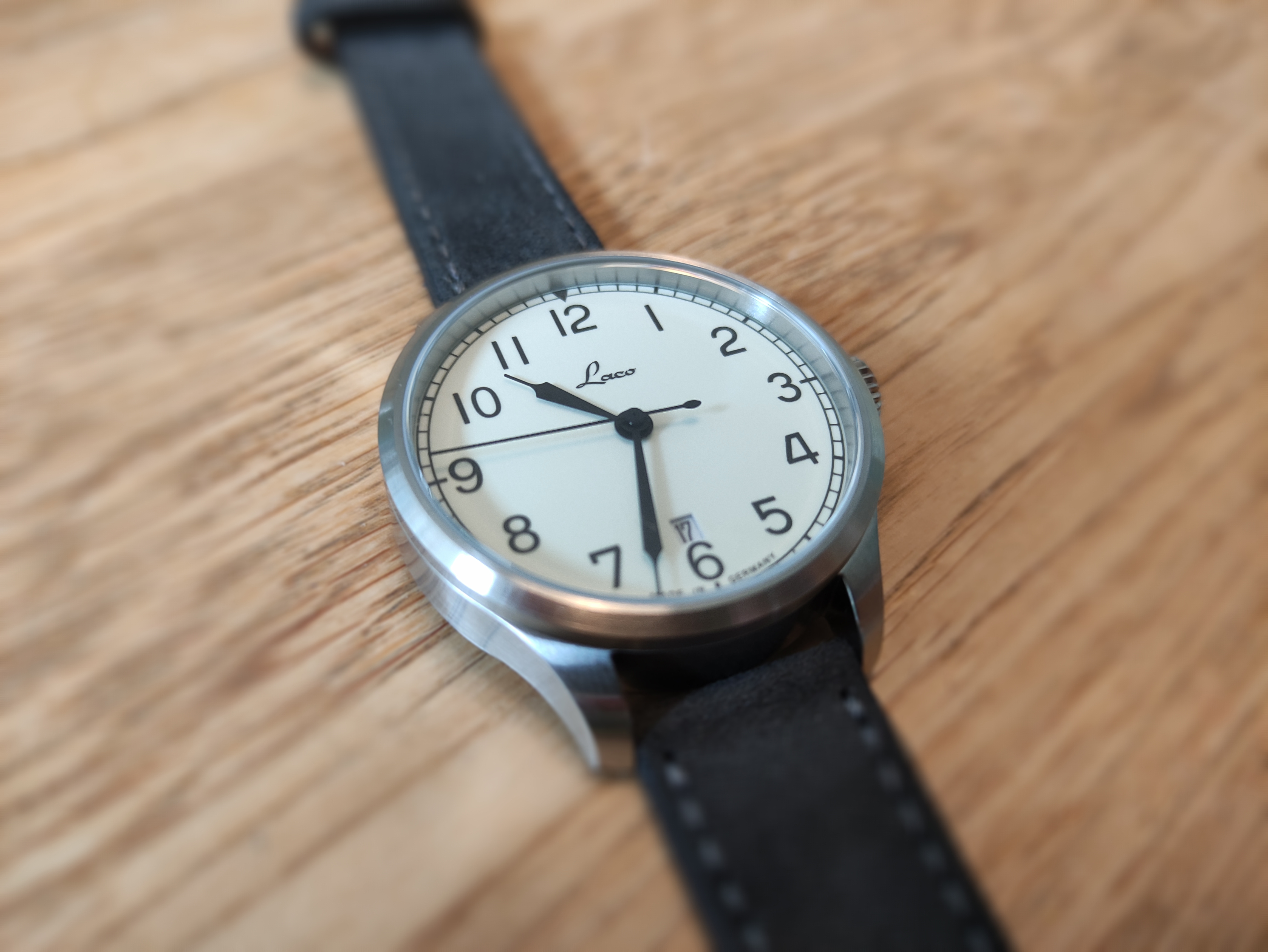 I have been enjoying wearing the Laco today. I hope it will be a daily for work, smartish but not dressy, and for those times when I could really do with a second (or even minute) hand.

I like the legibility, the faint green glow of the dial when going into a darker room, and the monochrome theme. I think I'd rather not have the date window - it doesn't spoil it but it is rather close to the numeral at six. I'd prefer a solid caseback but since I can't see it most of the time I won't grumble. 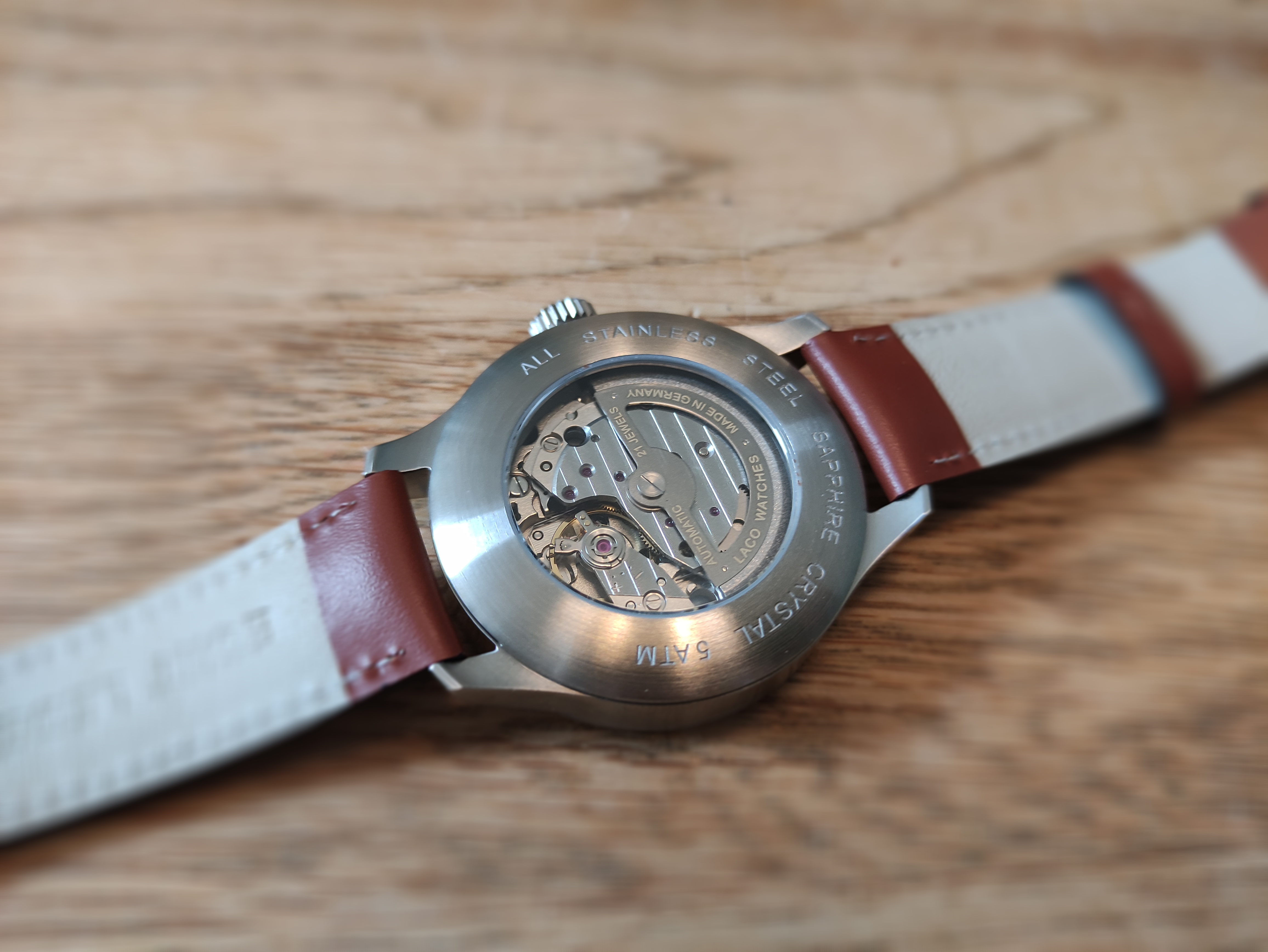 I will wear it and see how I get on. I'm the type of person who will persevere rather than make a snap decision (or admit I've got it wrong) but I am more fond of it now than yesterday so that's a good sign. That's all folks! 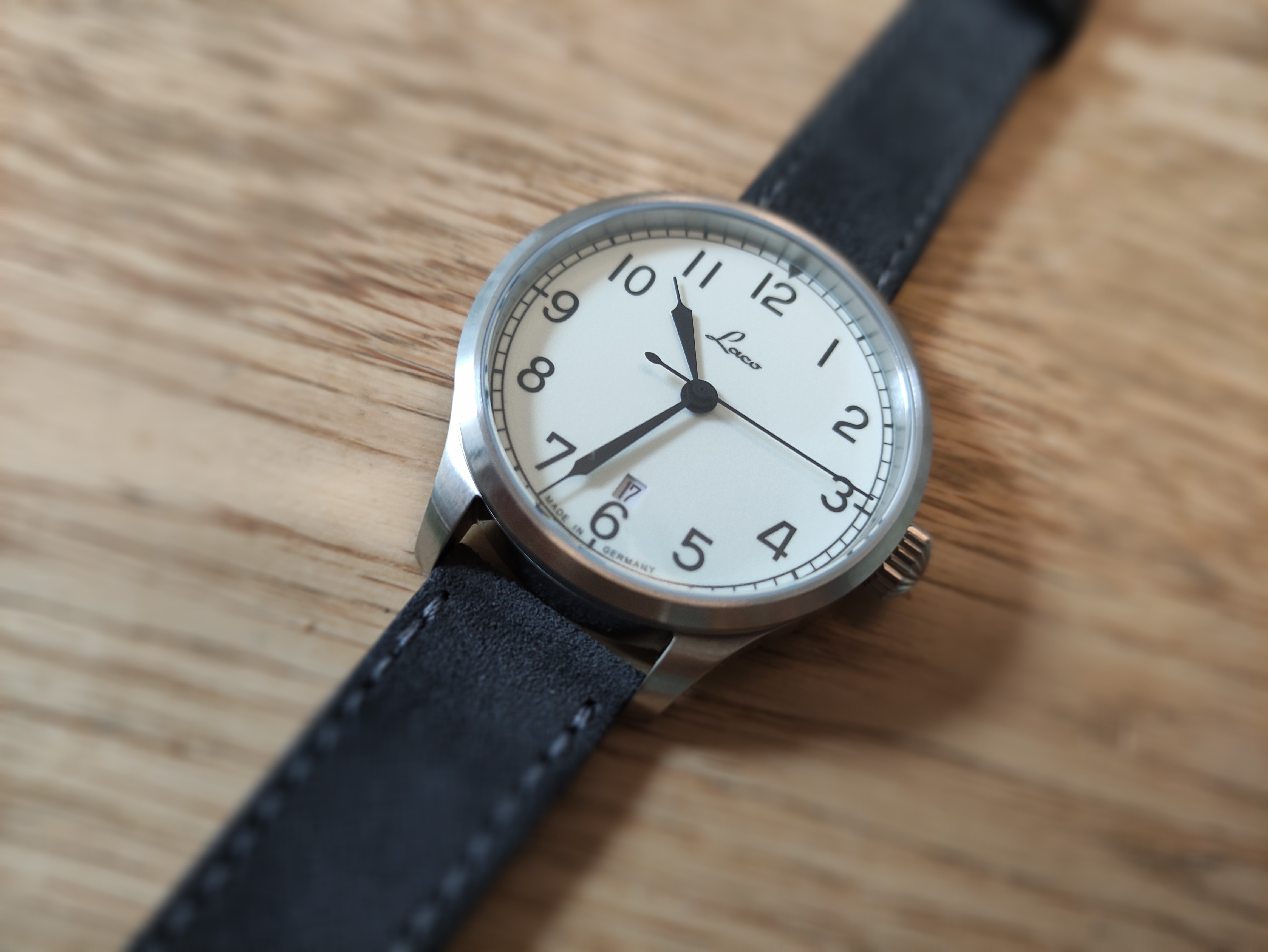 That's a great write up and some excellent photos. Thank you.

A pity you had a glitch or two along the way but, as you you say, its how the glitches are sorted out that is important.

Laco, in my view, are a pretty decent brand. I've had one of their entry level Fliegers, a Bielefeld, and currently have a B-Uhr Bronze Westerland. Both good watches at their price point.

Thanks for sharing, I enjoyed the narrative and the photos...

Agree with your thoughts on the excellent legibility and the slight visual tension of the date window placement next to the 6.. (fairly unobtrusive though given the colour-matched window IMO). I really like the exhibition case back for the view of the movement (but that's my own weirdness). The "hook" on that buckle tang is nuts..!

Great review, congrats on the new acquisition! A very understated style, I like it.

I bought a watch on TimeByMe earlier this year and had an issue with the discount code too. They rectified it quickly and my watch arrived here in the US within a week. Overall I’d say I’d buy from them again.