A place to discuss other watch-brands
Post Reply
27 posts

As some of you know (from other thread), ive been considering options for a white dial chrono and had decided to probably wait it out until funds permit something I really want.
However.... One of my friends in the USA has offered me a lovely condition Speedmaster 3570.50.00 which has had a Mitsukoshi redial/re-hand using OEM original parts... we know the origin and authenticity but theres no papers. Price is good/attractive and I love the look/dial/movement is OK etc. Google Mitsukoshi Speedmaster for loads of pics if you are unsure what it looks like - basically the 1st of the Panda Dial Speedmasters, a ltd edition of 300 only sold through the Mitsukoshi department store in Japan (I think in 2003/4)

The thing thats playing on my mind though is.. OK it uses original parts/is a well serviced Speedy that i like in right size for me, was modded by a well known Omega service/watchmaker in US, BUT.... its a modded watch and could be considered a Frankenwatch, Bitsa, or a bit like a black diesel Mercedes with a white respray and AMG badges applied. Also its not a $200 Seiko we are talking about.

Ultimately Ill make up my own mind after appropriate due diligence but really interested in the views of more discerning watch folks on here; would it bother you, is it a heinous crime, does it matter as long as its done with integrity etc...???
Stephen

Soporsche wrote: ↑
Thu Nov 07, 2019 12:11 pm
OK it uses original parts/is a well serviced Speedy that i like in right size for me, was modded by a well known Omega service/watchmaker in US

This is all that matters. You know the provenance, you're going into the deal with both eyes open and (I assume) you're not buying it at the price an original Mitsukoshi.

It's a lovely watch, don't be out off by any perceived stigma of it being a franken.

Does it include original dial/hands?
Top

If you like the look then I would have no problem. You've already mentioned the "integrity thing" which is a problem with a lot of modifications. If, should you come to sell it, it's clearly stated what it is then no one will get upset. You're buying it with your eyes open, there are no papers and so long as it's sold with the same integrity with which it is purchased, who cares. It's a lovely looking speedy after all.
Mark
Bremont, Casio, Citizen, Christopher Ward, Omega, Orion, Oris and Seiko
Top

This was a collaboration with Omega and not some crude aftermarket mod, so taking the Mercedes analogy from your original post, it's more of a Brabus (a good thing).

If you are happy with the provenance of the watch then I don't think you can go wrong, a very rare and very attractive piece.
Patrick

It isn't a Frankenwatch imo. It is a modded watch. There is nothing wrong with modding watches.

Modded it maybe, but to me one of the most attractive Speedmasters. I guess that none of us are likely to get our hands on the real deal (at least without paying an eye watering price). This is an honourable alternative.

Every time I see one of the modded versions for sale (preferably also with the original Moonwatch dial and handset in the box) on a forum I am tempted.

Thanks for the input and opinions. Seems to be a universal, if you happy with background and like it dont worry about it being an aftermarket mod.
Im generally a bit of a purist with watches (not always) but interesting to get opinion from genuine enthusiasts.

Im still undecided at the moment. TBH its such an attractive watch (IMHO) if it had all papers, original dial and hands in box etc. then I probably would have already gone for it. The fact I know the provenance/origin helps me but doesnt help if i come to sell on...
Im trying to get the vendor to contact the watchmaker that serviced/modded to put something in writing re authenticity of watch/parts/work carried out etc. at least there would be something.

Ill let you know if i proceed!
Stephen

I recall that at least one of his Speedmasters has been modded with hands from another.

If you decide to pass on it, pls let me know..I'd like to consider purchasing it..btw, one of my Speedys is a mod..I purchased a 'Moon to Mars' dial for a standard Speedy that I had picked up for a good price..I've no intent on selling it, so I'm nt worried about it being a mod..here is a pic of it..again, keep me in mind if you decide not to purchase it.. 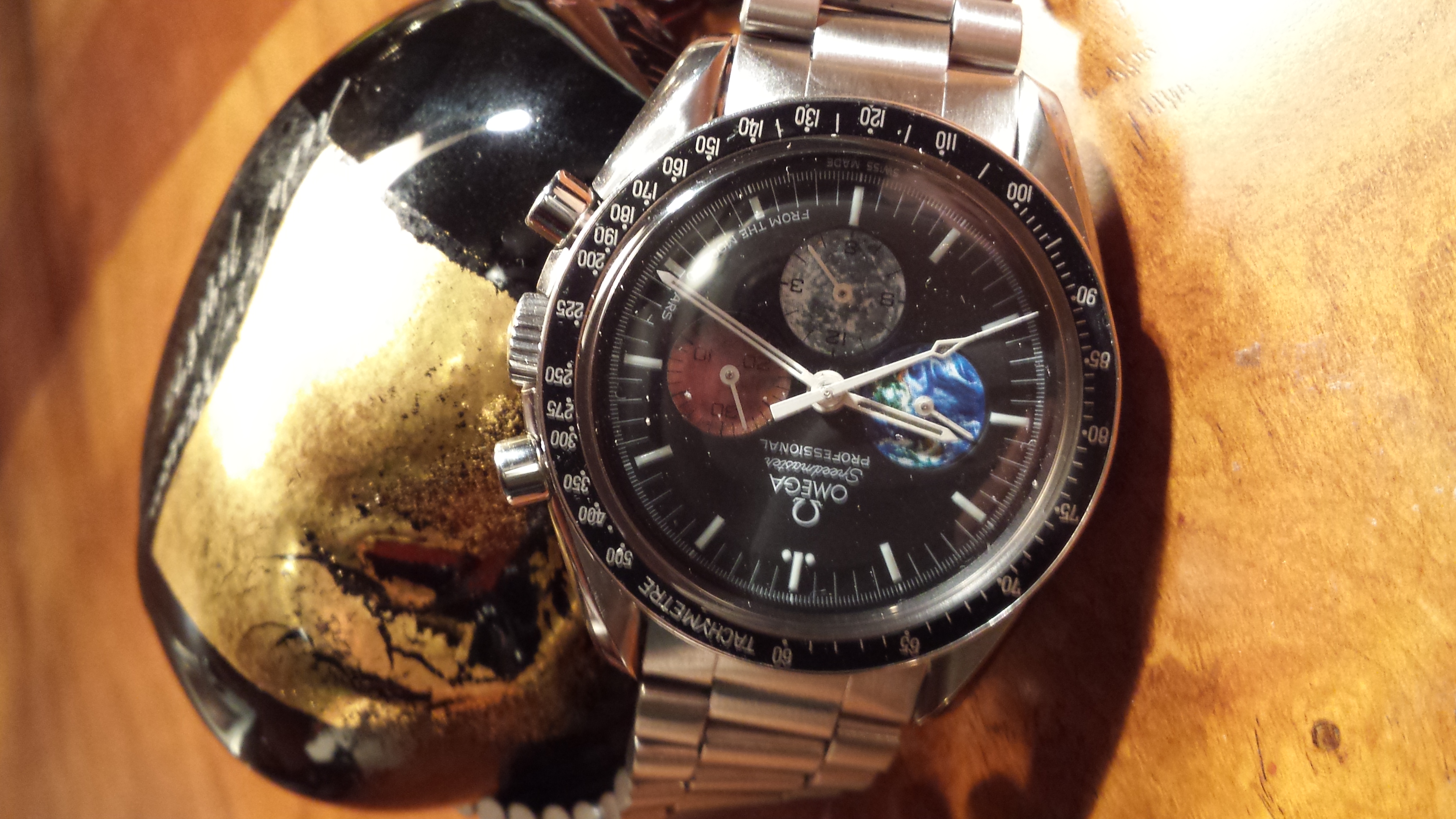 Ebels are a lot like women that lack a lowcut dress that zips up the side..neither gets the love that they deserve..
C60 GMT 600/C65 SH21 LE/C65 Trident Khaki & Black dials/C65 Black & Blue Dial Autos/C65 Bronze Ombre LE
Top

As as Speedy owner I too covet the Mitsukoshi dial. WIS on our forum has one and it’s fantastic!

When modded properly, as you described, it is a non issue for provenance and re-sale.

The Mitsukoshi mod kits are feisty price-wise and are also scarce to find.

Without question my vote is you proceed !!!
Small collection of timepieces that I enjoy
Top

I'd proceed at once if the price is reflective of the fact that it's an aftermarket mod. As the very worst, in time you could potentially return the watch to standard and resell the dial/hands?
I just think it's cool to have an obsolete technology on my wrist that actually works. - rfortson
Top

It’s your watch, mod as you like. I support it

“Frankens”... these are watches that have been built from parts of other watches to look exactly like a standard watch. In most cases, people don’t care. When it may become an issue is when the result, if genuine, would be a highly desirable watch, but one where pedigree and provenance are key to its value. These are not fakes in the conventional sense, but can nonetheless be represented to be something they are not.

I own or have owned a few of what could be called Frankens. If you know, upfront, that they were not produced from the factory in the same way that they now appear, I have no problem. At all. Represent it as an original, then you’re talking shady. Some of my Frankens have been NOS builds; that is watches made up completely of genuine, brand new factory spare parts.

To me there is no way these could ever be viewed as having potentially come off a production line some fifty years ago - they look as though they were made yesterday. And that’s part of their appeal to me; having a brand new “50 year old” parts watch on my wrist is pretty damned cool. I don’t pretend they’re anything but that. I do however, have have real issues with people who pretend otherwise when selling said watches. Therein lies the danger of watches such as this...

Here’s are some that I’ve owned or still own. 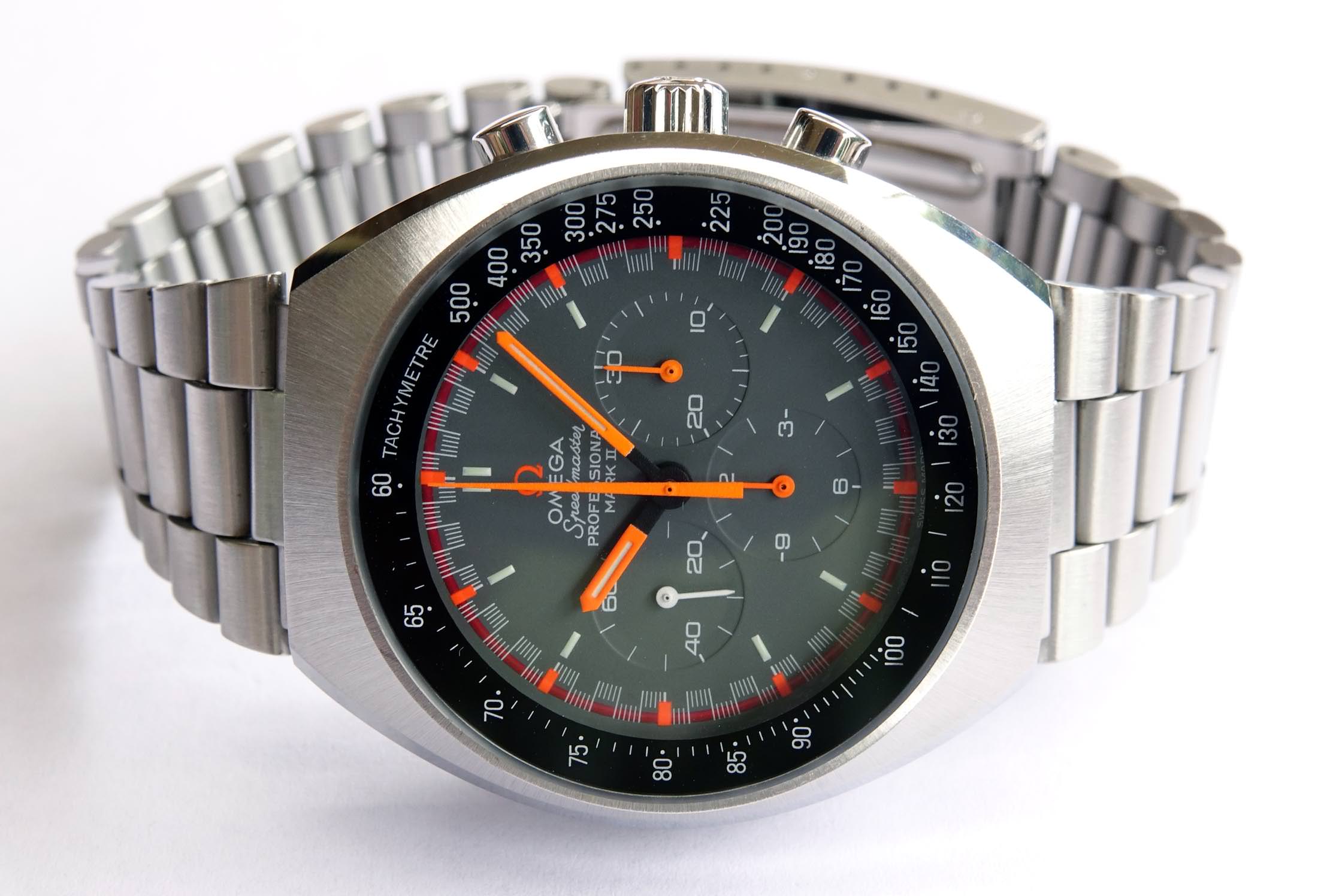 The speedy in question in the original post is another category of Frankens - one existing watch made to look like another, by the judicious use of spare parts. No problem with that - again, I’ve owned one of these: 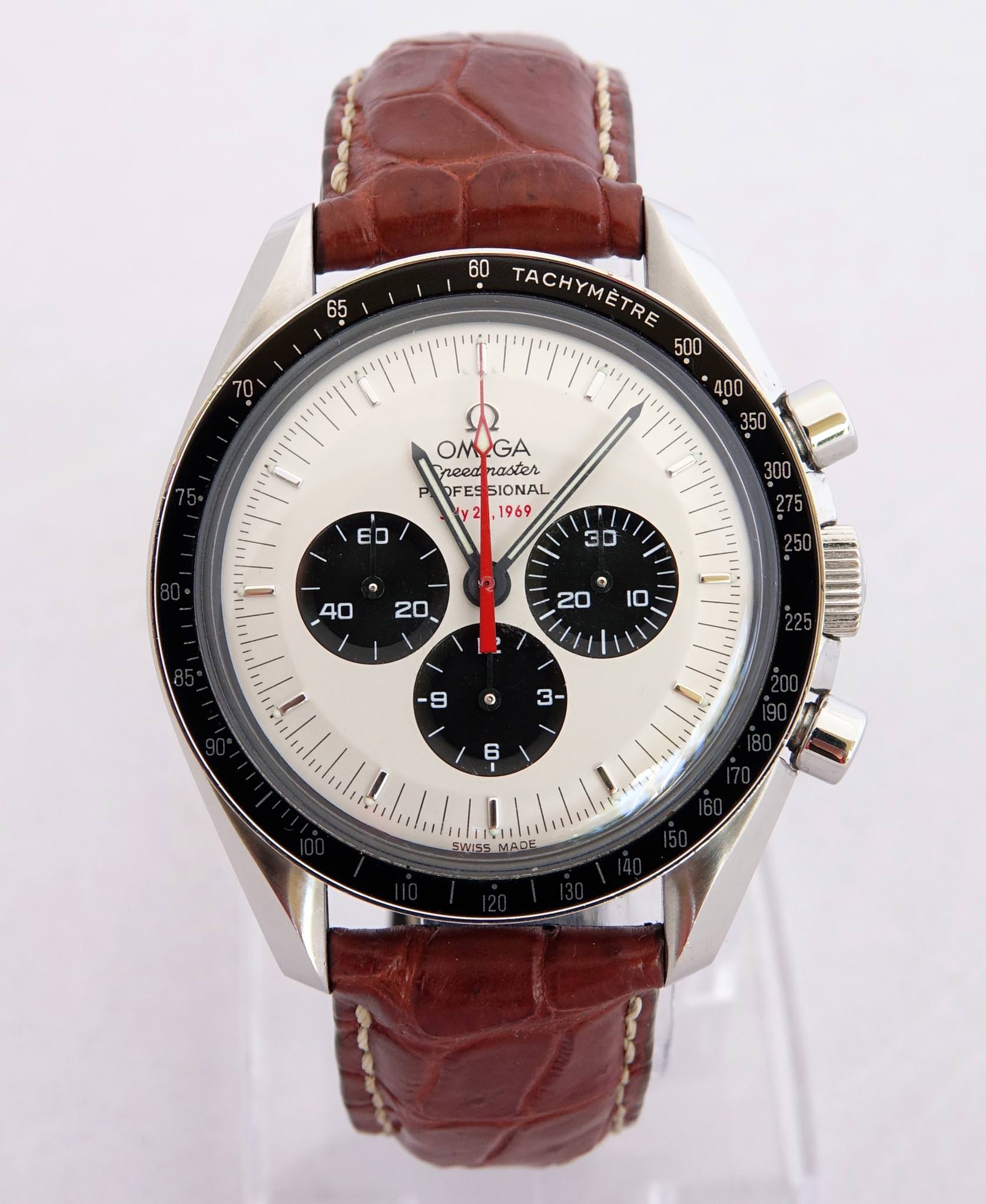 To me, if you like the watch and you know its provenance up front, don’t let that hold you back from buying it. Particularly if the price is right, which it usually is for these - the often less valuable than the standard ones...

Then we get to Modding. My definition is changing the appearance of a watch to make it look different to the standard model. The reasons for modding are legion. I have two main drivers, aesthetics and usability.

Aesthetics... here are some examples. Electric blue SMPs have a polished bezel. “Hmm, I can improve that” says my brain, so every electric blue SMP I’ve ever owned has had a blue bezel fitted. Likewise, both of the white SMPs that I’ve owned have had the standard polished bezel replaced with a black one... 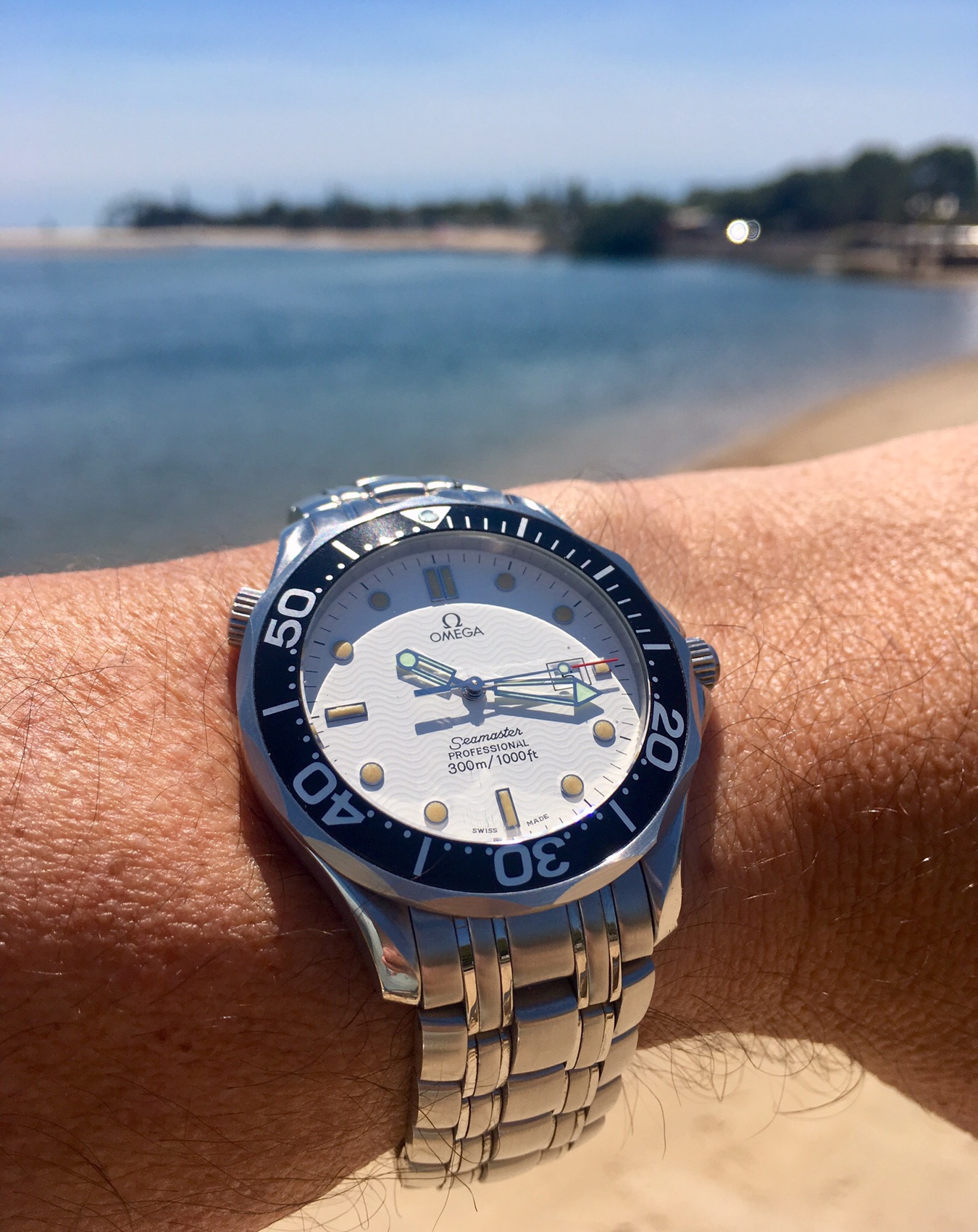 On a similar theme, my white and blue Broad Arrow Speedy came from the factory with a polished stainless bezel. Mine is now fitted with a blue Gemini LE bezel. Usability... One of my bugbears is that watch faces should be able to be read at a glance, without having to tip it back and forth, seeking to get reflections on the hands so that I can see them against the dial.

My Gemini LE (a real one, by the way) has been modded with a set of orange hands from a seventies model. No problems seeing these little buggers, something that could not be said of the standard polished steel ones - which are safely stored away should I ever decide to sell this (I’m not). These are only some of the Omegas that I’ve modded. Get into Seikos and.... whew.

I have considered trying something similar. Pretty sure the watchmaker at my local Omega AD would really enjoy helping with this, but don't have any idea where to source the parts.
Time is fleeting....happy hour, doubly so.
Dwight
Top

I managed to buy the parts before Omega stopped supply completely. I have a few spare seamaster and moonwatch bezels and hesalite crystals for Speedys and Dynamics tucked away.

Nowadays, if you can find an AD with an on-site watchmaker who’s willing to help, they can order the parts in and do the work. Don’t bother with an Omega boutique; they only deal in standard.
CWL C1+2xC3+C5+6xC6/60+C7+C70+C9+C11+C15+5xC60T+C65+2xC600
Omega Ω 11xSpeedy+6xSeamaster+Connie+2xDeVille
Cartier+2xPanerai+Tudor+3xFarer+2xOris+3xMagrette+16xSeiko+7xVtg
B&R+Hamilton+2xHalios+3xVisitor+Tissot+more
Family 12xCW+2xΩ+Cartier
Top
Post Reply
27 posts