The COSC certified/grade movement appeals to me too, I'm getting fantastic timekeeping from my C65 Cranwell at +1 sec p/d. Plus I know it's been discussed a thousand times, but I really do think the logo at 12 works for me

One says stainless steel with with a gun metal finish and one says pvd.. The same or different?
Top

Sent from my SM-G973U1 using Tapatalk

$1000 USD for a certified Chronometer dive/field watch is a pretty good deal.

Sent from my SM-G973U1 using Tapatalk 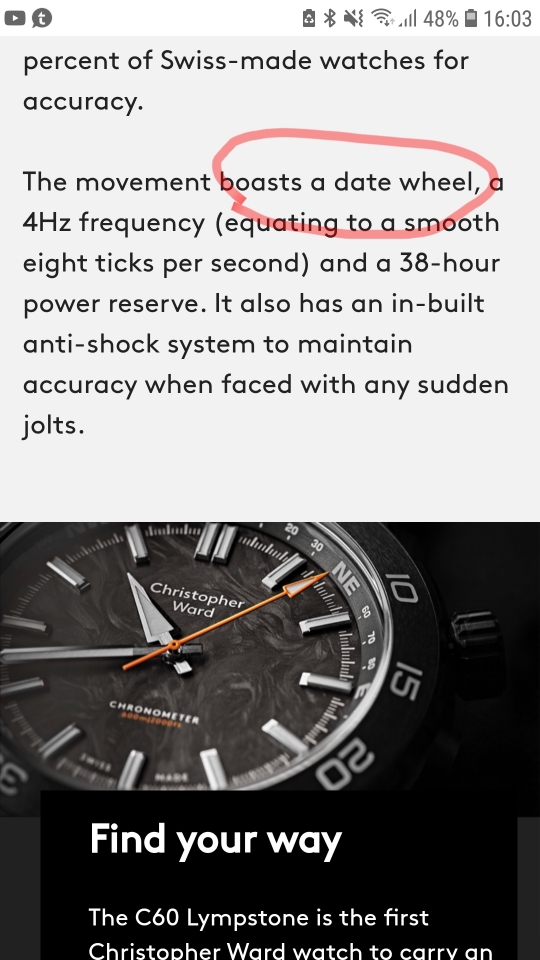 Sent from my SM-A520F using Tapatalk

Yep - the small details that make you think 'what else have they overlooked' and so take your money elsewhere.

They also state in the blurb it has a countdown bezel but unless I have missed something that bezel looks like a normal timer bezel, ie count up!
Watches - Too many but not enough!
Top

I think this is superb. Not keen on plated steel in general but this really works for me. I like that each dial will be unique too. I don't know how the compass function works on a filthy grey August day but I reckon you could bivi down and pass the time until the sun comes out again day-dreaming about being a real commando with this on your wrist.
Top

Hmmmm a C60 with no date - it’s what I’ve been looking for since I joined this forum. However I feel that I couldn’t wear it as I’m not a Bootneck.

oberonfoto wrote: ↑Fri Aug 28, 2020 5:21 am The watch it’s self does not say “Lean green fighting machine” to me, where is the Lovet green of the Royals hard won beret? The “commando danger” of their shoulder flashes?

Interesting, I wonder how it would look with green used for the highlight colour instead of orange for the second hand/dial.
Jon

As a former RM Commando, I must admit I am a little disappointed with this watch.

Having the Commando dagger on the rear case would have also opened it up to "Pongo" and "Matelow " commandos, may have also left space for a unit number like "40" "42" or "45" as us modern guys had only those 3 units straight out of basic training.

Maybe like also suggested a dark/green face could have worked, but you can't please everyone

not sure I will buy one, shame, very proud to have been one of the "proper" Marines

Remember...your left hand has the thumb on the right hand side
Top

That did make me smile, Jimbo!

My father served in the Navy during World War II, and at certain points sailed with the Arctic convoys to Archangel and Murmansk. His nickname in the family (for some reason we all had one!) was Bluenose. This was apparently appropriate since I understand the Bluenose Certificate was awarded to sailors who had crossed the Arctic Circle.

My mum’s brother Doug was too young to serve in the war, but had done National Service later in the Army. My father’s nickname for him, naturally, was Pongo.

None of which I understood when I was small, but I just became used to their greeting whenever they met: Morning Pongo...Morning Bluenose!

Although my father passed away many years ago, Doug always persisted in using family nicknames and until the day he died, five years ago at the age of 82, was always known as Uncle Pongo! Happy memories!

Having the Commando dagger on the rear case would have also opened it up to "Pongo" and "Matelow " commandos, may have also left space for a unit number like "40" "42" or "45" as us modern guys had only those 3 units straight out of basic training.

I’ve my “Dolphins” which trump your green ferret Royal. Dolphin 38.

Now on to the watch. Think a green forged carbon dial would look good and replace the plain second hand with a Commando dagger shaped one. At 0500 this morning I was trying to think what watch it reminds me of and I think it’s the EB Horton. Not as rugged but the look is similar. As for getting 40/42 or 45 on the watch CWL does offer a good engraving service.
David
CWL C60 Trident Pro Orange, C60 Trident 600 GMT Red, C60 Trident 300 - RN SM Service, C60 Trident 600 Bronze GMT, C65 Dartmouth S1 Black
EB Canford SM Service, EB Holton Pro, Omega Geneve, Record Swan, CWC G10
Wife:
CWL Constance
Top

Agreed that it's a lovely and, according to the bumf, suitably tough. but I do wish it had a date.
I appreciate that Royal Marines probably don't need to know if it's the 11th or 12th when they are storming a pillbox, but the rest of us do. (Because we're just paying bills and working out when payday is).
Anyway, I like it, and could someone please, in layman's terms, explain how to work the inner compass. Ta.
Top

In the northern hemisphere, orient the hour hand to point towards the direction of the sun. Then turn the inner ring until due south splits the difference between the hour hand and 12 on the dial. Now the cardinal directions are roughly oriented. If you’re in an area observing daylight savings time, you got to use standard time for this.*
.
.
.
.
.
.
.
.
.
.
.
* all this according to the YouTube video I watched yesterday when I asked myself the same question.
Andrew
“I can't stand it to think my life is going so fast and I'm not really living it.”

Maybe like also suggested a dark/green face could have worked, but you can't please everyone

not sure I will buy one, shame, very proud to have been one of the "proper" Marines

Also as a former RM Commando I have to mostly agree with Jimbo. I have been looking forward to this release, but now I've seen it I'm on the fence as to whether I would buy it. There are other RM options out there such as Bremont (more expensive) and Citizen (less expensive). The compass doesn't do much for me. If I wanted a watch with a compass that is not digital, I would get a Seiko Alpinist for a lot less money. I like the overall look of the watch, kind of like a mechanical G-shock, but don't know if it speaks RM to me enough to buy one as a special watch to commemorate my time in the Royal Marines, which is what I was hoping for. A standard C60 with the same design, colorway, and DLC case, with no chronometer movement or compass would be a nice watch for less money. I'll have to let this one marinate for a while.

Following on to what Jimbo said about proper Marines. As I now live in the USA I have a lot of friends who are former USMC. I would always tell them that RM stands for Real Marines