Advice on servicing a CW Makaira

Advice on servicing a CW Makaira

About 8 years or so ago, I bought my second CW watch, a C11 Makaira Pro 500. This is the first and only nice watch I've ever bought new. About a year or so ago, I noticed some strange sparkle on the crystal. Turns out, somehow the second hand got a little loose and has been rubbing against the back of the crystal, leaving some luminescent material on the inside of the watch, all over the crystal. I filled out the repair form on CW's website several months ago and only received back an automated form email that they received my request. So today, I decided to just take to to a local watch repair shop. They looked it over and determined that the tiny screws on the back of the watch have been damaged, as if someone has already opened it up once. Now, I bought it new, and have never taken it in for anything. But, they showed me under magnification, and sure enough, the tiny hex screws have been damaged as if the wrong size hex wrench was used to open it at some point. I cannot explain this for the life of me. They said it's highly unlikely that would happen during the original assembly since they would presumably have the proper size wrench to fit said screw. Since I have owned it, no one has put a tool to those screws I can absolutely guarantee, is there any way they sent me a used watch? That also seems unlikely.

So now, I cannot decide what to do. They did say for a small fee, they could attempt to open and clean it, but that they cannot guarantee that it would work, and afterward they couldn't guarantee it to be waterproof anymore. I filled out a second form, and got the automated response back already from CW, but I did get that last time and no follow up whatsoever. I live in the U.S. and have no idea how they go about servicing watches anyway. Do they send me something to pack the watch in and ship it to them? Does it cost an arm and a leg? Should I just pay the small fee and let the local place do their best? I don't dive, but the thought of it no longer being swimming pool safe is frustrating. Any advice on how to proceed would be appreciated, and thank you all in advance.
Top

When a watch is out of the warranty period, as yours is, the cost of returning to CW is down to you. They will more than likely charge you for a full service, plus parts and return postage. This is what happened to me when I sent an 8 yr old watch in for repair. As you’re in the US, the postage costs are going to be a tad more expensive than it was for me. You may also have issues at customs, if the paperwork is not done correctly.

You might be better off finding a local place who has facility to pressure test. There’s nothing special or exclusive about CWs servicing!

As for the issue of the damage to the screws on the case-back, we can all speculate but I guess we’ll never really know?
Steve.
Top

It seems to me this is a simple repair. It will be simple for the movement to be removed from the case and the crystal to be cleaned on the inner surface. While the movement is out the second hand can be checked for being seated correctly. The water resistance can be checked by a competent watch repairer who handles dive watches. If you don't take it swimming (I never take any of my watches under water) then no worries. If it were mine I would take it to a main dealer watch jeweller rather than send it back to UK.
Top

I think their biggest concern was trying to remove those screws that are rounded off and replacing them to the point that the water resistance would be compromised. She mentioned they would not be able to replace any parts because they had never heard of the brand. Is there a gasket or something that needs to be replaced when a watch is opened?
Top

There is a rubber o ring gasket, does not need to be replaced unless damaged. The screws are not done up really tight, or they were not on my sample. To open mine I used the right size allen key, it fits snugly.
Top

I don't have very good experiences with CW's customer service. I find them to be slow and nonresponsive. However, in your case, I think it is better to send it back to CW for service since your local watchmaker may not have the part.
Top

I would imagine CW would have methods for removing damaged screw heads during service but if you wanted to keep it local you could try this: 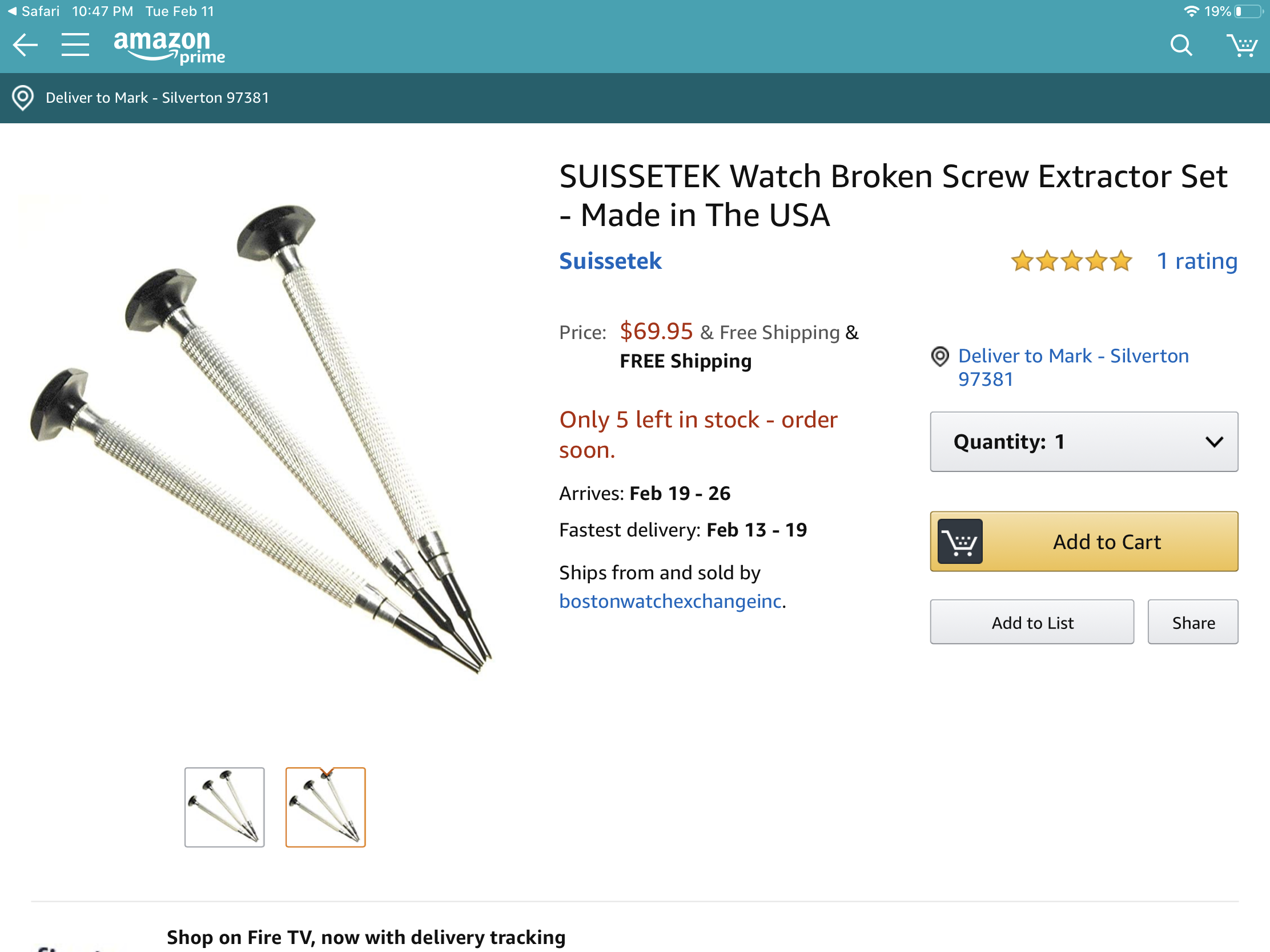 Could you post a picture of the screws?
Top

I can try later today but I'm not sure if it'll show up without magnification. I know I never noticed it until they showed it to me at the jeweler through a 10x loupe. I will try zooming in with my camera and see if it shows up though.
Top

I really cannot see how a competent watchmaker would either not know or be unable to open this watch.

In addition, the screws are likely to be available to said competent watchmaker, who, if all else failed, could contact CW on your behalf and simply ask for replacements. They won't be expensive.