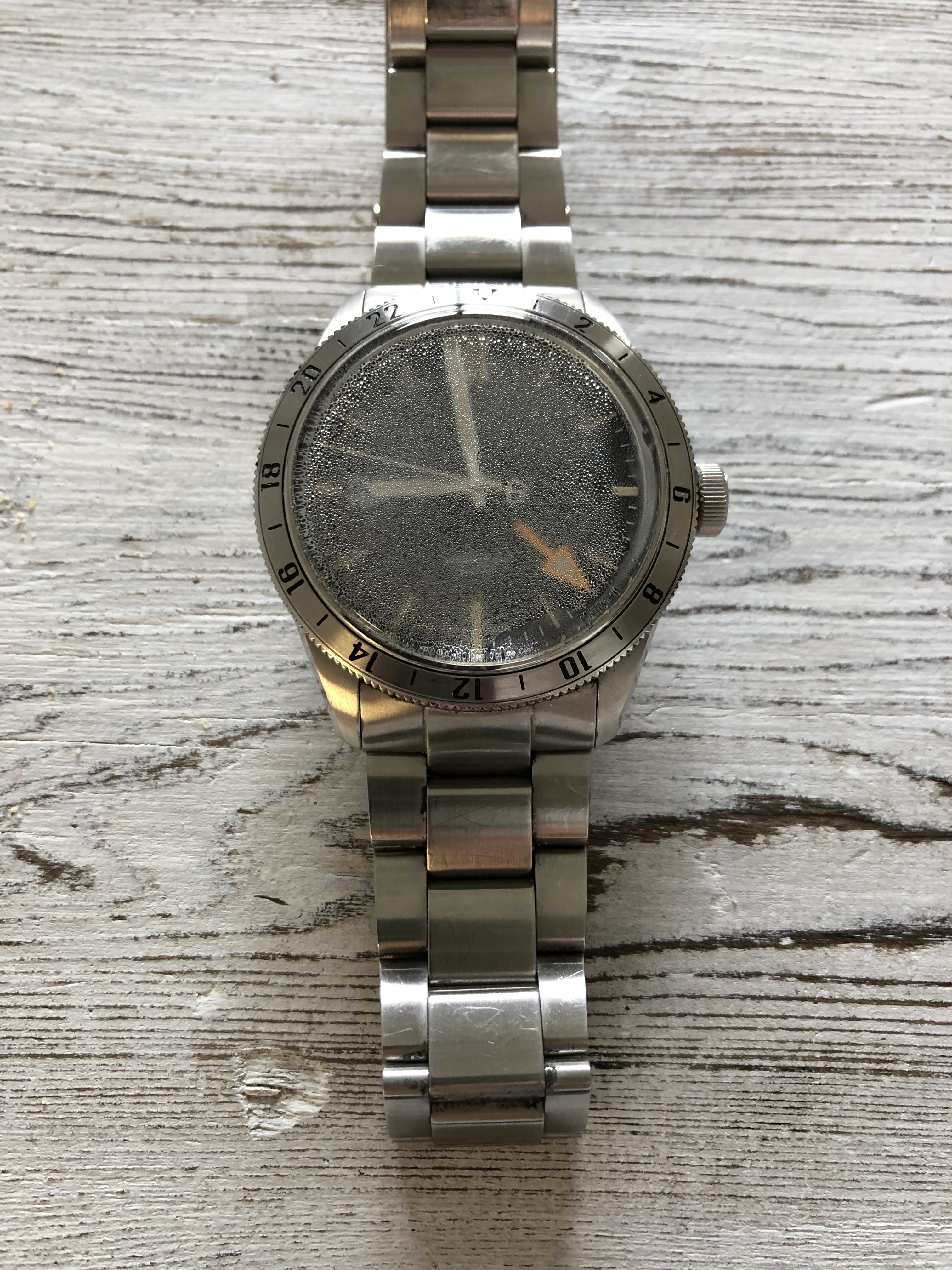 This my first post so hello to everyone on the forum.

I bought myself a C65 Trident GMT a few months back. I needed a new watch and had been looking through the CW website for a while in appreciation of their fine range of watches. The watch had been excellent. I'm far from expert but to me it seemed like a great purchase.

That was until I wore the watch in the sea in California last month. I was only in up to my waste, keeping an eye on my 9 year old son as he played in the shallows with a ball. The watch only went under water to a depth of two or three feet at most. It's supposed to ba able to handle 150m.

When I looked down at the watch, after being in the sea for 30 minutes or so, I noticed the whole inside was wet and had fogged up.. badly.

Of course I immediatly reported the fault to Chris Ward customer services who suggested I send the watch in to be assesed on my return to The UK.

The customer services team at Christopher Ward canmer back to me ten days later after receiving the watch by email onforming me that I would have to pay them £466 to get the watch back in working order. No mention of why it wasn't waterproof whatsoever, just a demand for nearly five hundred quid to rectify the issue. Their justification for the charge is that there are some small marks on the bracelet that render the guarantee void. The watch itself is in perfect condition.

I'm stunned. Totally falbergasted that this small boutique brand that I've been singing the praises of has let me down so badly.

Has anyone else experienced anything like this when dealing with CW, or suffered such a catastophic manufacturing blunder with their watch?

WatchChat on Facebook - The friendliest watch group on Facebook chatting about our watch passion and whatever else happens to come up.
Top

Did they send you an invoice or just tell you how much the repair would cost?

When I returned my watch to them they quoted me £360 to fix it and could I "call in with my credit card or send PayPal details". I found it a very strange request without an invoice. I asked lots of questions and was ignored for a couple of weeks before I was told it was being repaired under warranty. It's been a long slog and they've now had my watch for over 14 weeks. As an aside, I received an email with my "order" not quite a couple of weeks ago detailing parts and service costs amounting to £360, which was then zeroed. I wrongly assumed that them sending me this meant it was about to come back to me but apparently not.

I think if I were you I'd be getting in touch with them again. It sounds ridiculous for them to not fix that under warranty.
Top

Any wear to a bracelet would not impact the water resistance rating so their explanation sounds ridiculous and hopefully a mistake. With responses like this people will be afraid to get their watches wet! Even dive watches! As it is a push in crown at least they can't say that you left it unscrewed.

If this is the first phase of contact I would try and speak to them politely on the phone directly rather than email so that a sensible conversation can be had.

I am not a legal expert but as you bought the watch from a UK company the UK Consumer Rights Act applies. Forget their 60 day return policy and now conditional 60 month movement guarantee - the watch is faulty and if this occurs within the first 6 months they should refund, repair or replace the watch - the burden is on them to prove that the watch was perfect when you received it. After 6 months the burden is then on you to prove.

If they still insist that you need to pay something again, ask to escalate the issue. If it was my watch and they would not do the honest thing and sort it out I would turn up to their office in person and speak to someone as they cannot continue to get away with this level of contempt for their customers, whether it be by mistake, misunderstanding or sheer disingenuous behaviour.

Hope you get this resolved as soon as possible without too much stress.
Top

This seems absurd. I mean how can a diving watch , under warranty, that get filled with water, be pushed back to the owner?
Never mind the fact You may have worn the watch on a different strap mostly too.

I have just purchased my first Christopher Ward watch and it should be arriving in the next few days but I ordered 3 weeks ago.
I have been told several different timelines and missed deadlines for delivery. It appears the seperate business units don’t speak to each other but eventually my watch is on its way, they upgraded to express shipping too. I’ll be posting when it arrives. Still as a first time buyer it was quite scary.

My advice , don’t get angry with them, just state that it is unacceptable and ask why they advertise a warranty and a guarantee if it’s not worth the paper it’s written on. You would like them to stand behind their products. Someone should see what the right thing to do is. (Unless they can see you’ve damaged the case and watch yourself of course)

Seems strange to me.

The warranty/guarantee is for the movement and the bracelet condition is irrelevant, however, I do wonder how long waterproofness could be covered for. Would this be under the 60/60? Strictly speaking, the seals are not part of the movement.
Top

WTF? "The bracelet has marks, so the watch is no longer waterproof"!? What kind of **** are they trying to sell here. Can you imagine your car dealer telling you "your blown engine isn't covered because they seats have some wear". Chris Ward and Mike France need to fix this crap before the brand is completely destroyed.
2017 CW Forum "Darwin Award" winner.
Top

This is getting beyond ridiculous.

So we have a movement guarantee but water resistance is not covered? Normal wear and tear render the guarantee void?

Honestly?
I think you're in line to receive the award for "Biggest crock of ##it ever spouted to a customer by a sales partner".

Some of us are old enough to remember the joke in ladies footwear of the knee-length variety: "Fashion boots love, not designed to keep any water out."

I wonder if the owners of the company condone what's happening in their name?

I'm not sure what's worse: the failure of the watch or the failure in customer service values.

And to think that customers used to be looked after by the wife of CW himself.

I'd be copying this post to every social media outlet I could find. Oh and buying a different watch.

Sent from my SM-N950F using Tapatalk

I can understand the sentiments, but this almost seems too absurd to be true.
Top

Something doesn't add up here or, perhaps, has been misunderstood.

I read this on my phone, and then cranked up my computer to answer... and in the meantime, MarkingTime and welshlad said what I was about to say.

If this were true, it would be outrageous. It would, in fact, be so outrageous that I cannot believe any company, even if they have trouble getting their customer service running smoothly, would be stupid enough to do something like this.

While I'm not saying I distrust the OP, I also state for the record that I have literally seen before how a competitor fabricated lies about a product. I just hope that this doesn't happen in the watch industry. I think there's more of a chance that somewhere in here lurks a misunderstanding of damaging proportions.
Man with one watch, always know time. Man with many watches, never sure.
(unidentified Chinese philosopher)
Top

I would also like to see the report. My first reaction on hearing a claim of water ingress into a new 600m WR dive watch, after 30 minutes of splashing around in waist high water, would be to ask:

The OP doesn’t mention this either way, but I wouldn’t necessarily take it as a given.
Steve
The half minute which we daily devote to the winding-up of our watches is an exertion of labour almost insensible; yet, by the aid of a few wheels, its effect is spread over the whole twenty-four hours.
Charles Babbage

Amor Vincit Omnia wrote: ↑
Sun Sep 22, 2019 10:11 am
I would also like to see the report. My first reaction on hearing a claim of water ingress into a new 600m WR dive watch, after 30 minutes of splashing around in waist high water, would be to ask:

The OP doesn’t mention this either way, but I wouldn’t necessarily take it as a given.

Apologies: thank you for the correction, Alex.

You are right of course, it shouldn’t have let water in. I’m even more interested now to find out why CW considered the warranty void.
Steve
The half minute which we daily devote to the winding-up of our watches is an exertion of labour almost insensible; yet, by the aid of a few wheels, its effect is spread over the whole twenty-four hours.
Charles Babbage