So it has been a week since I picked up my C60 Elite and I wanted to share a few thoughts in case anyone is on the fence and looking for some more info. My intention is not to write a "review" here. I have idea how to do that, nor would I want to.

I am just giving some honest feedback and posting a few pictures (some of which I have previously posted in the launch thread).

First up the stats: go an look them up on christopherward.com

I went to see the watch in the showrooms in Maidenhead. First impressions were: It's a much heavier than I expected. I am used to Titanium watches as I can't wear Stainless Steel... this feels much heaver than what I am used to from Titanium. I put it on, sits great on the wrist, but it's a big watch. I have been wearing a Sinn 103 (41m x 17mm / Titanium on Titanium) for the last few months. The Elite is 1mm wider but nearly 3mm slimmer, but it feels much heavier and bigger. The Sinn disappears on the wrist. This does not. You know it's there. It's heavy. If you like the feeling of a sub weighing down your arm this would be right up your street. If you were hoping because it's Titanium it would be light and adapt to your skin temperature and it would disappear, this is not the watch for you.

Here the brand new Tridents at the CW Towers, they had arrived that morning and had not been unpacked yet! 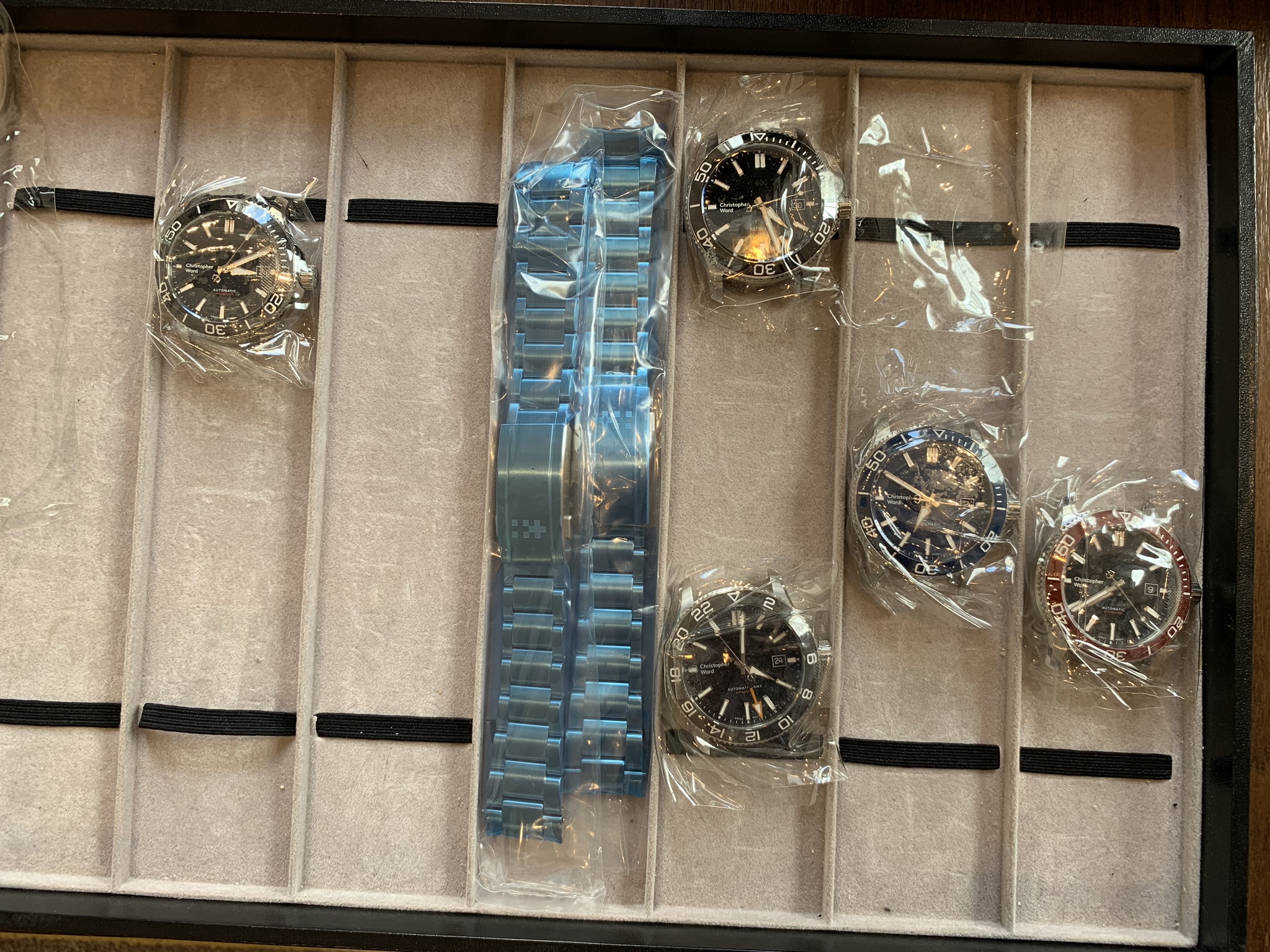 As you can see it's a thick watch: 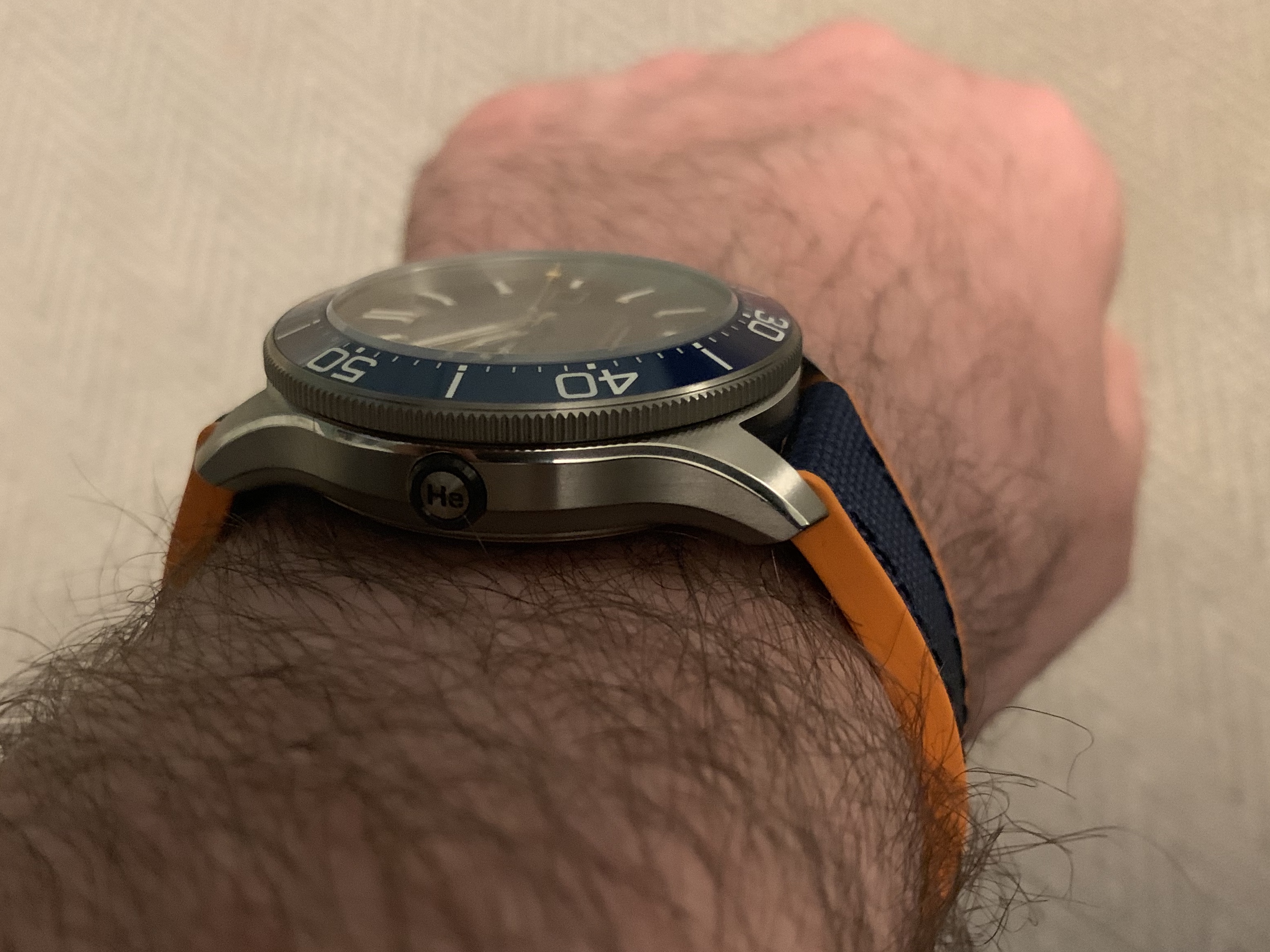 I was in Maidenhead for business, so after my visit to CW, I am straight in a Uber to LHR with the watch on my wrist. Fly back to Dublin and I am home about 3 hours after leaving CW. 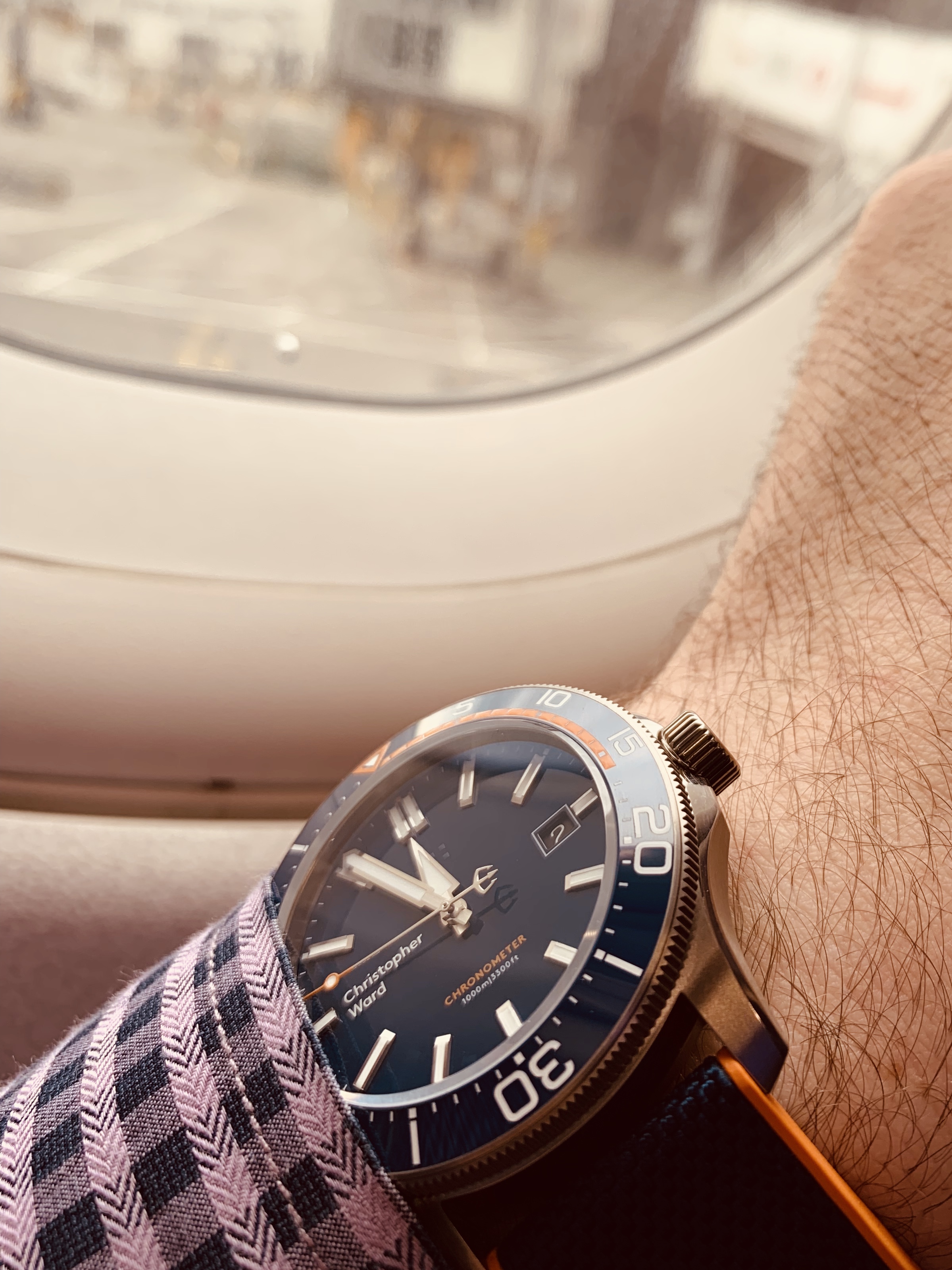 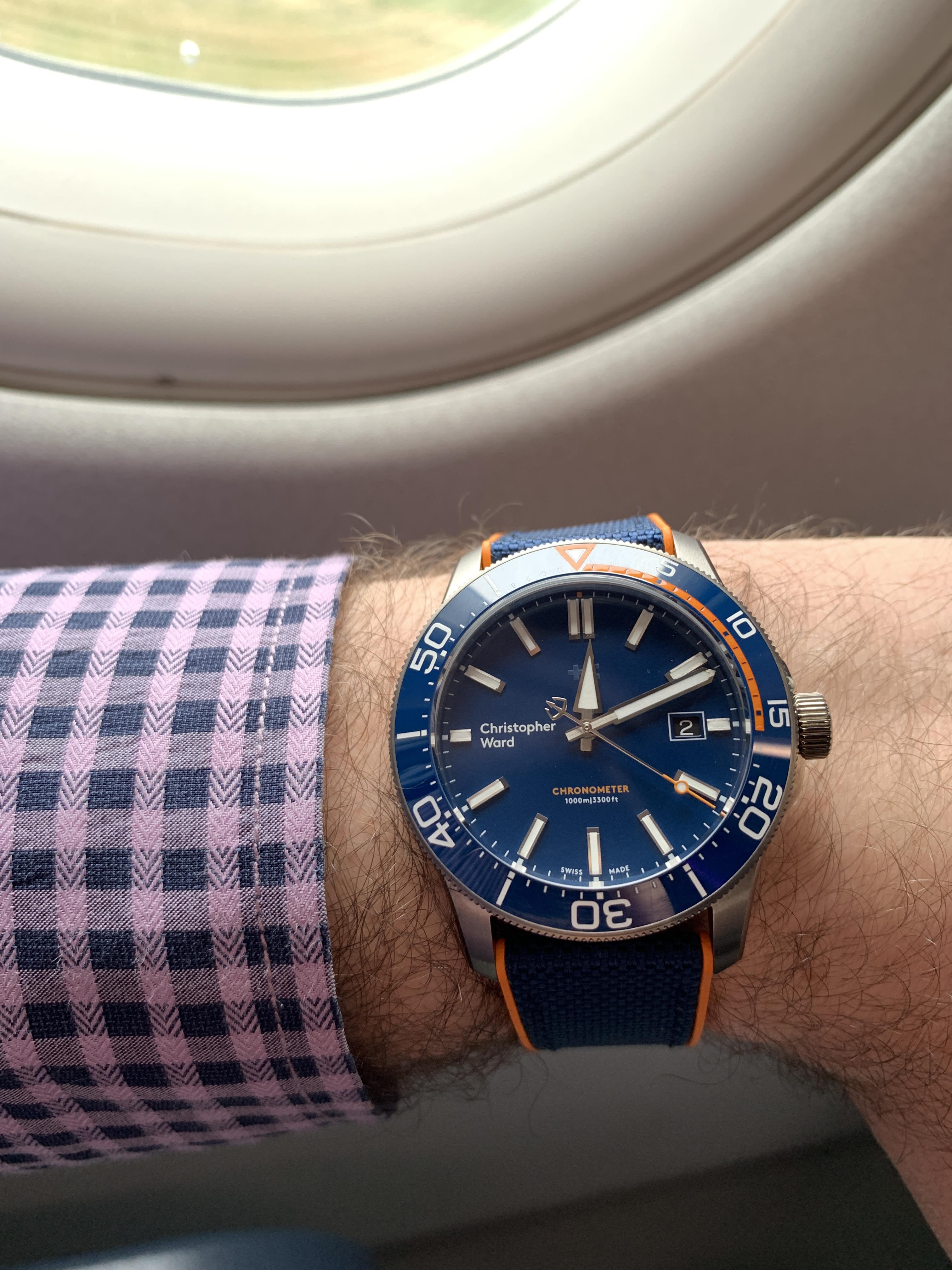 My wrist starts to hurt a little, it's sweaty and irritated by the hybrid strap - I am hoping it just need to be broken in. 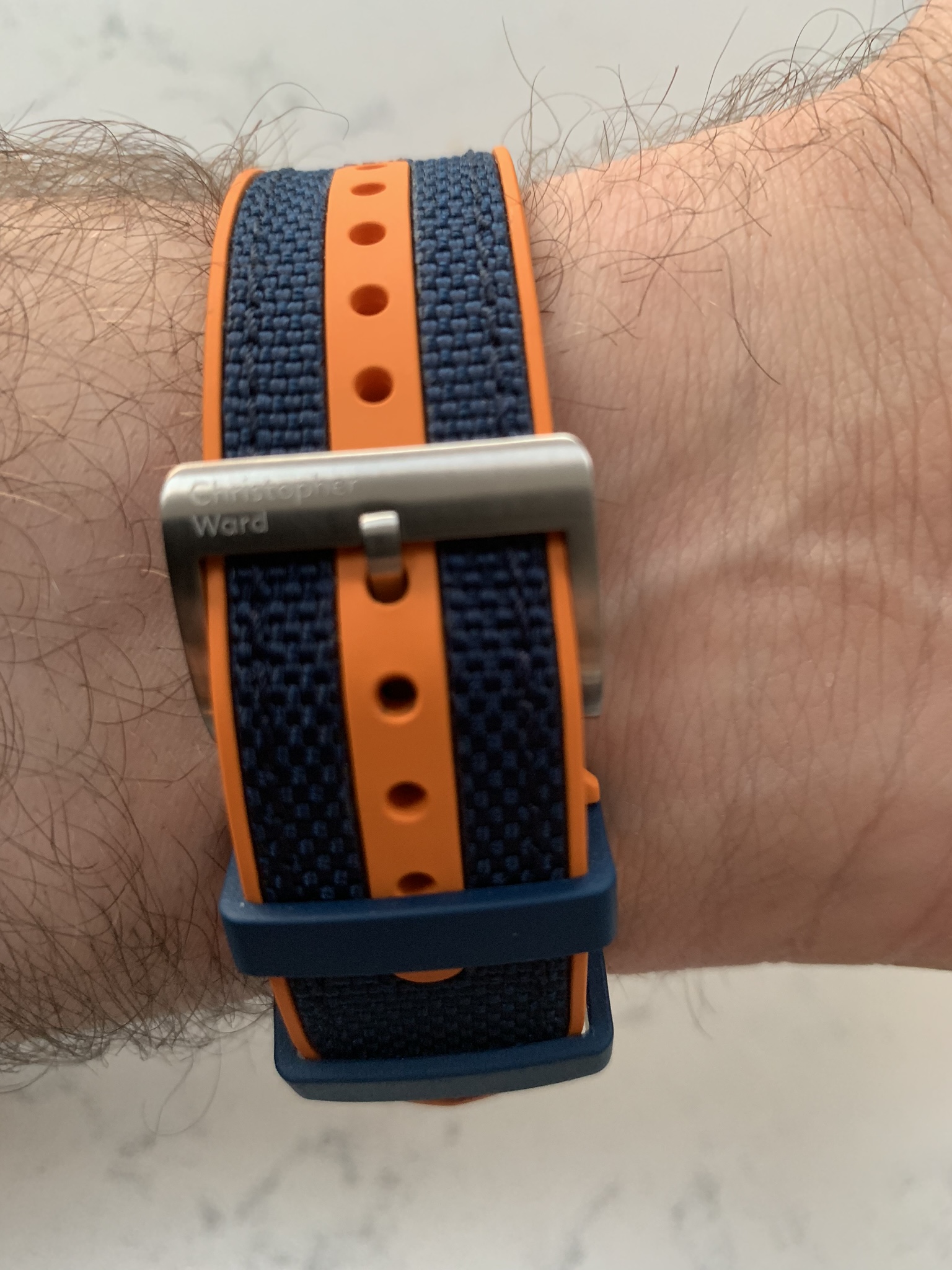 For the next 2 days I leave it tied extremely tightly around one of those watch "cushion things" that you get with your watch box. It's sitting in the box for those two days to stretch out. Only thing I do with it during that time is a couple of watchtool.io runs. One 12 hour run, one 24 hour run. Both at exactly -1.5s/day. What you would expect from a COSC mouvement. Happy with that.

Strap being stretched out: 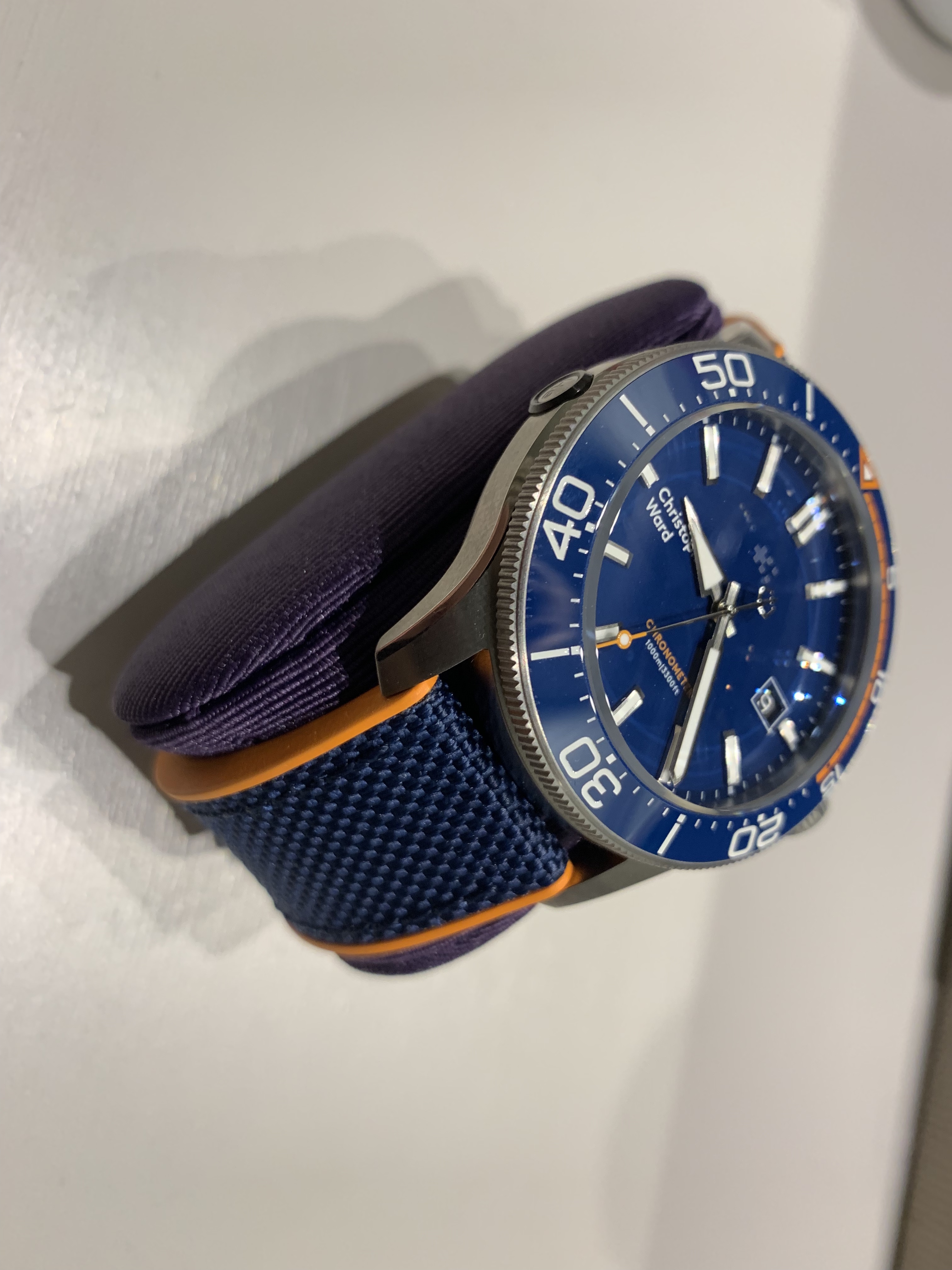 Resting for a couple of days in good company: 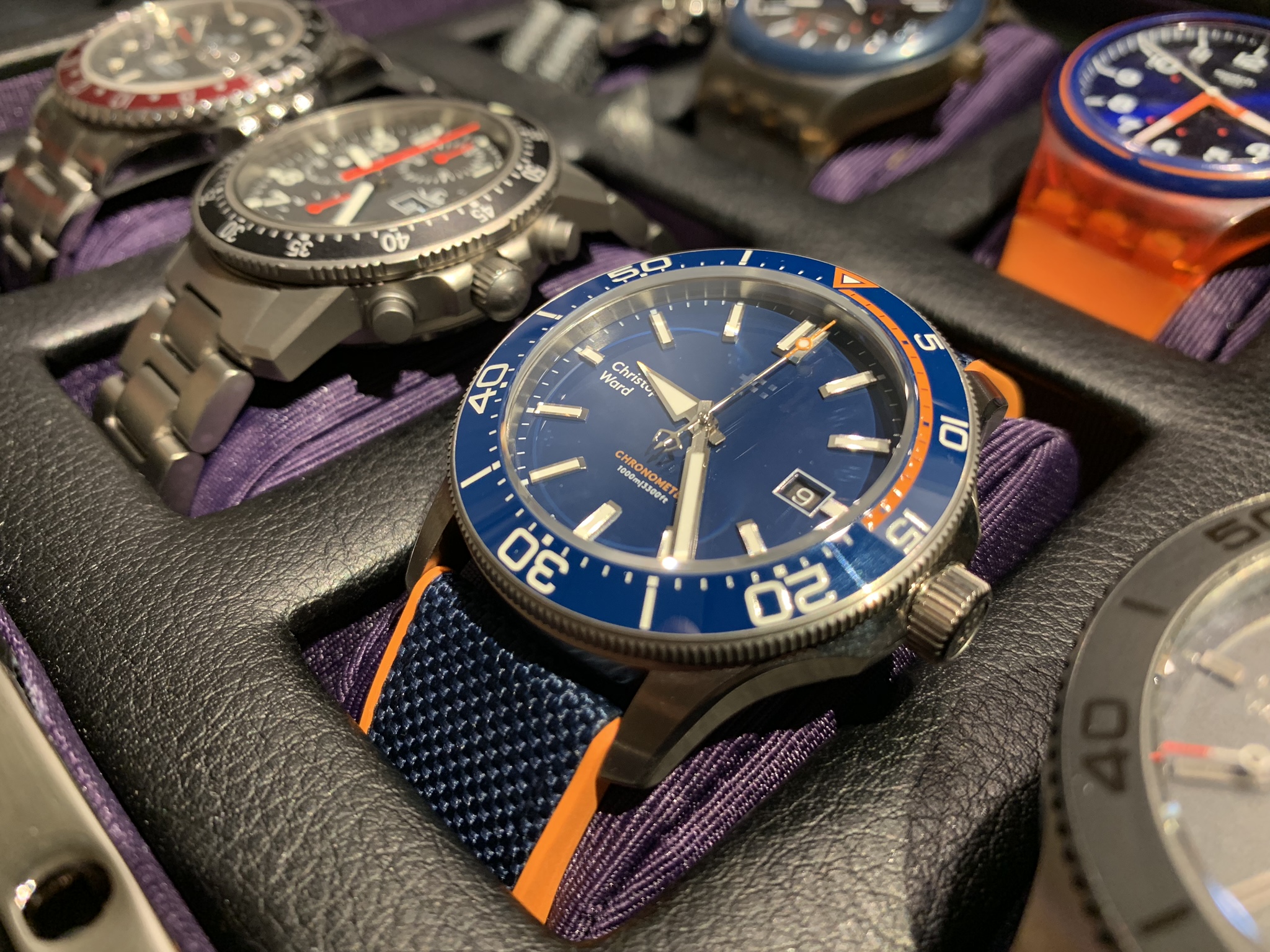 On Monday I put it back on for work. The strap is much more comfortable. Looks great, love the blue and orange. The blue sometimes even has a dark green tinge. A few more things I notice during the next few days:

- The glass is very reflective. Can be hard to read when any direct light shines onto it. Read some things about AR coating or not, don't know anything about that, but it's not too annoying.
- The Bezel looks really good. The click feels cheap, but sounds expensive. Not sure that makes sense if you haven't tried it...
- It's a magnet for fingerprints and difficult to clean with anything but the proper tool, a microfibre cloth. It will not let itself be cleaned on the jeans or shirt.
- The back scratches super easily. Even the tongue from the buckle touching the back lightly leaves a scratch. But since it's Titanium the scratches become less noticeable with time.
- After it's stretched out, the rubber strap is still quite sweaty, but it's easy to adjust during the day as temperatures go up an down.
- I love all the things that users on these forums and others have complained about.

I love the logo at 9. I love the twin flags at 12 and I actually think they are a great symbol for the brand. Love the box it came in. The hands do overlap a small bit when at opposite sides, but you can't see that in day to day use, unless you stare at the watch for much, much longer than you ever would checking the time and go looking for flaws. And even then I don't it looks bad. Maybe odd, but not bad.

The box. Looks fine to me: 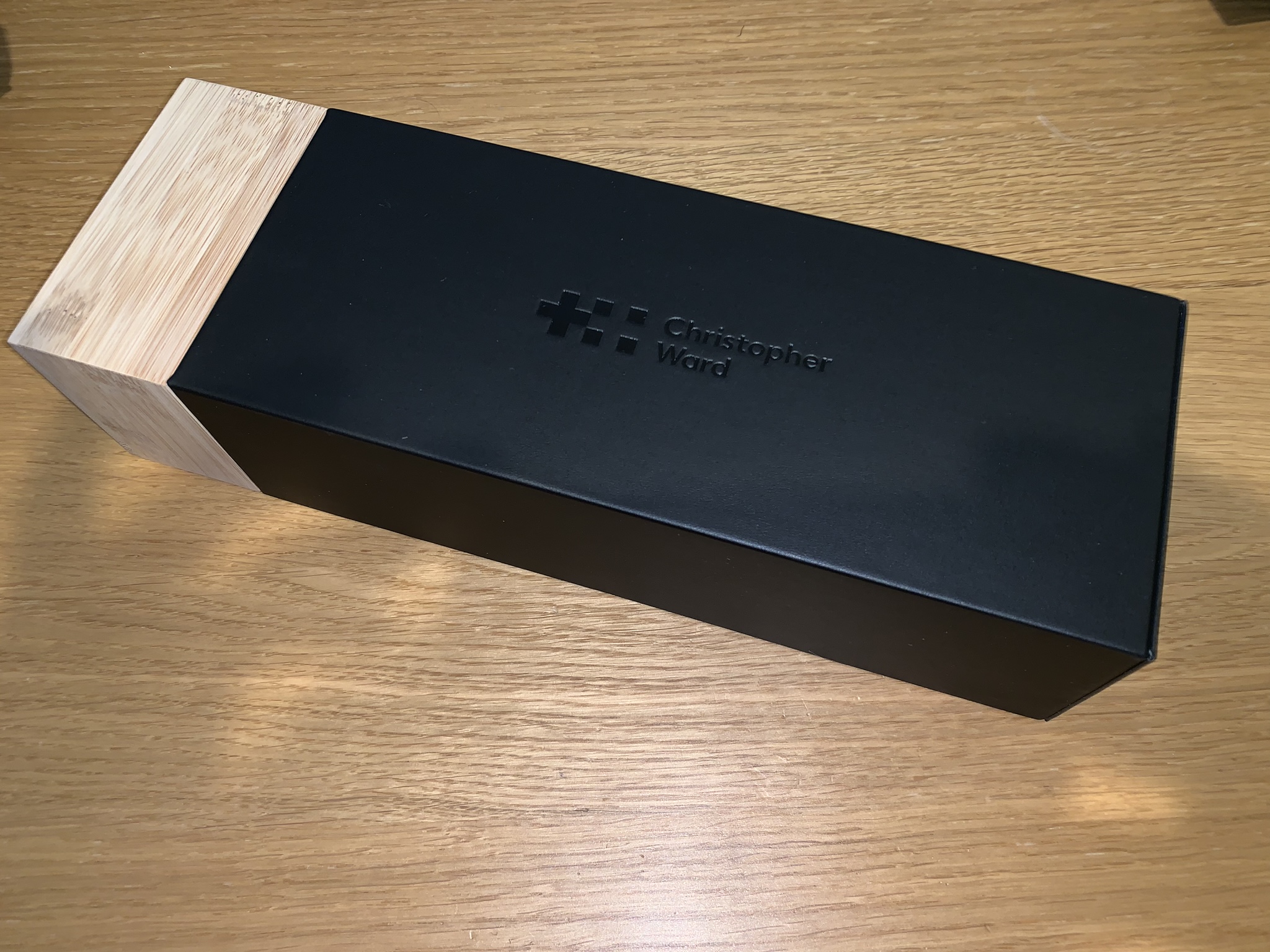 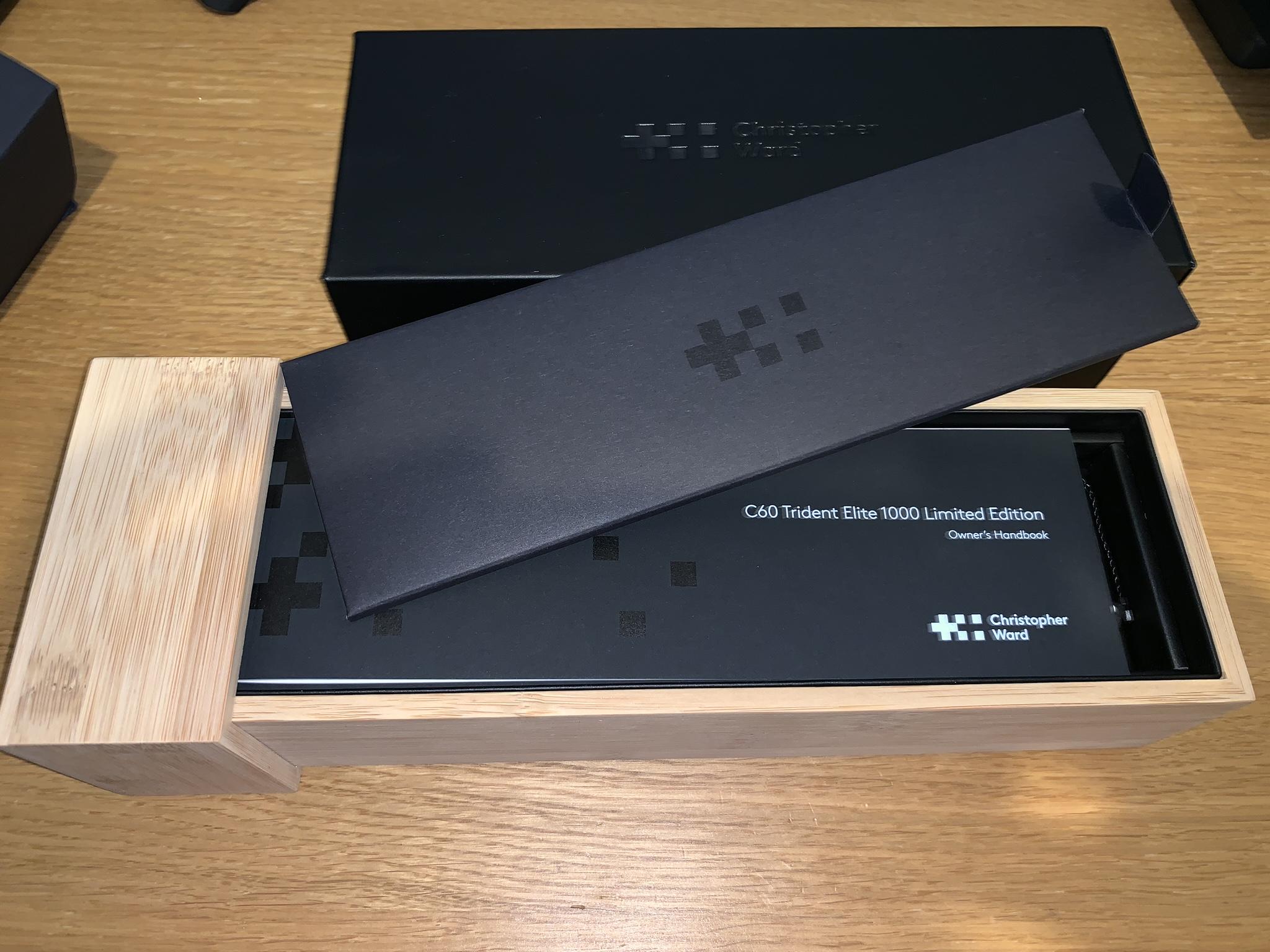 Overall very happy with my purchase. It's great watch and even the better half said she liked the orange highlights. She has never commented on a watch before. Good purchase! 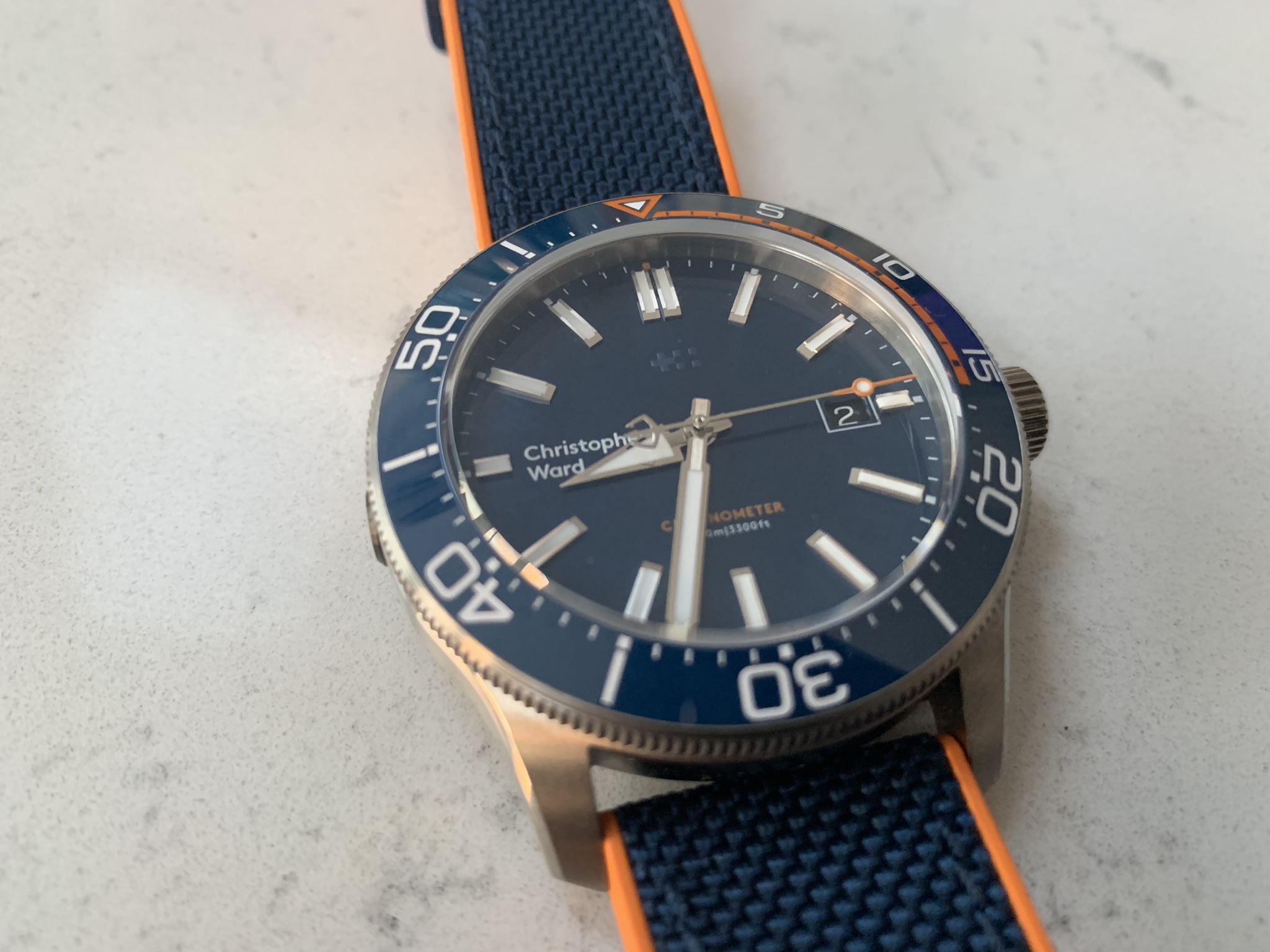 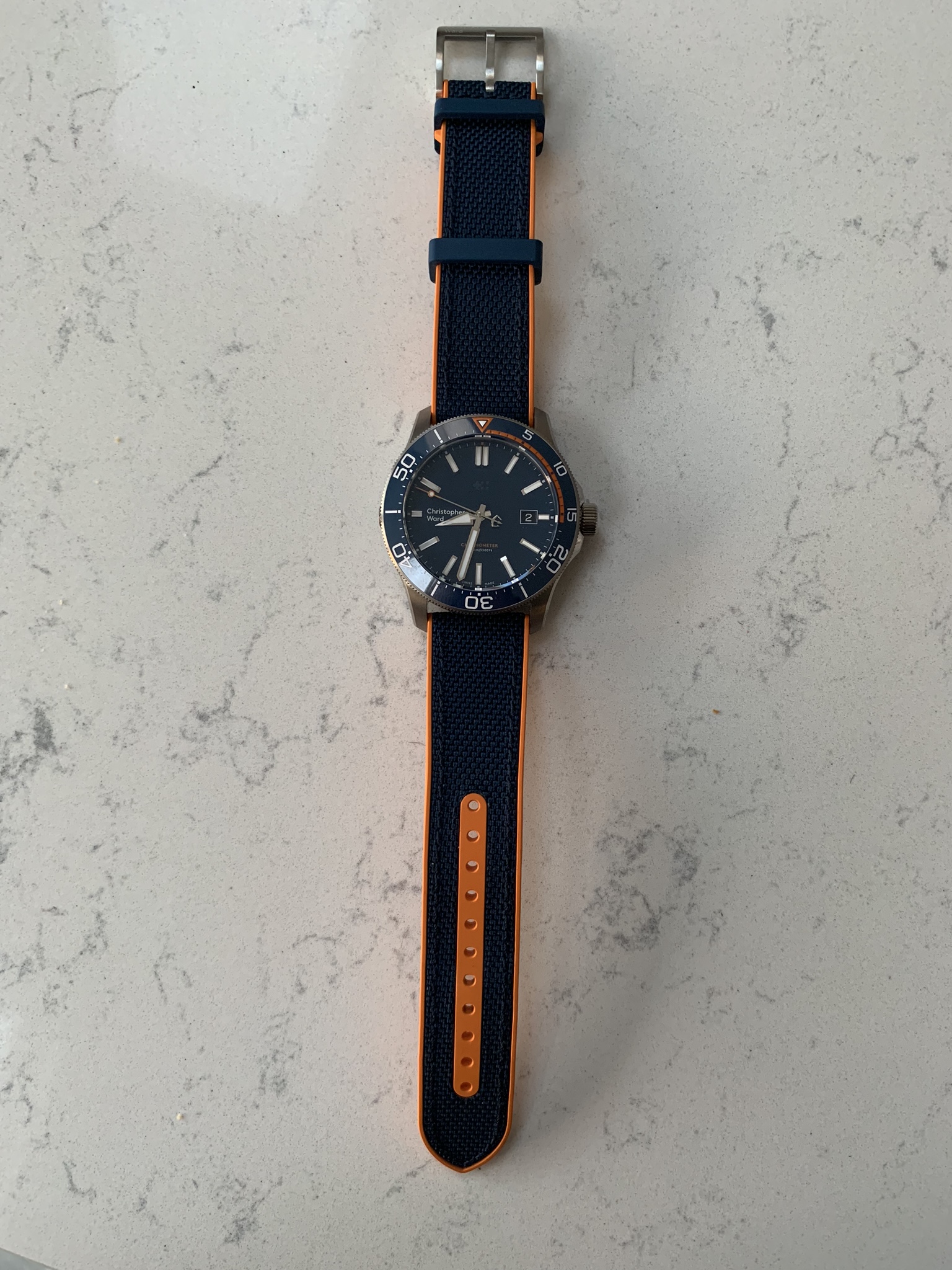 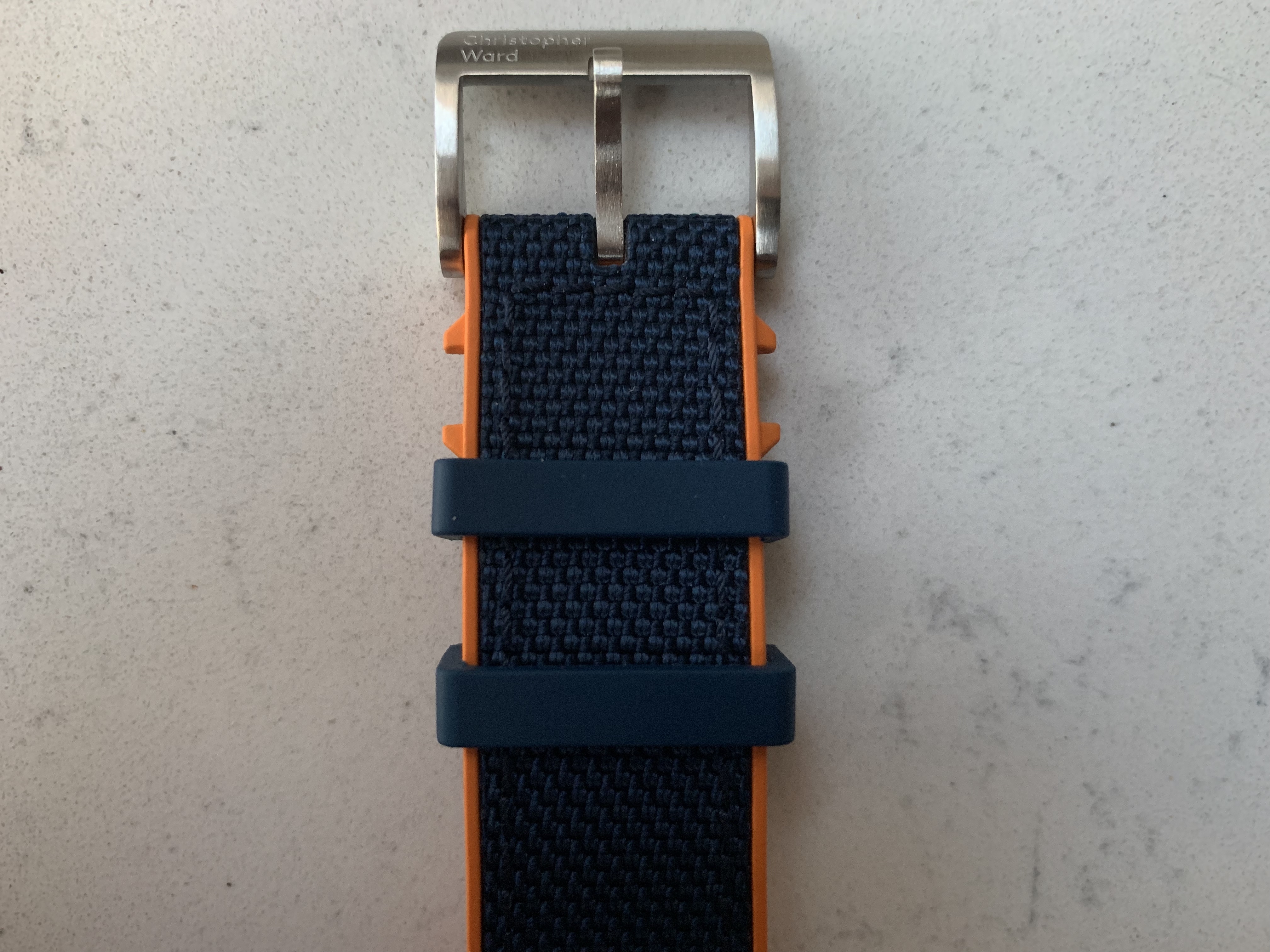 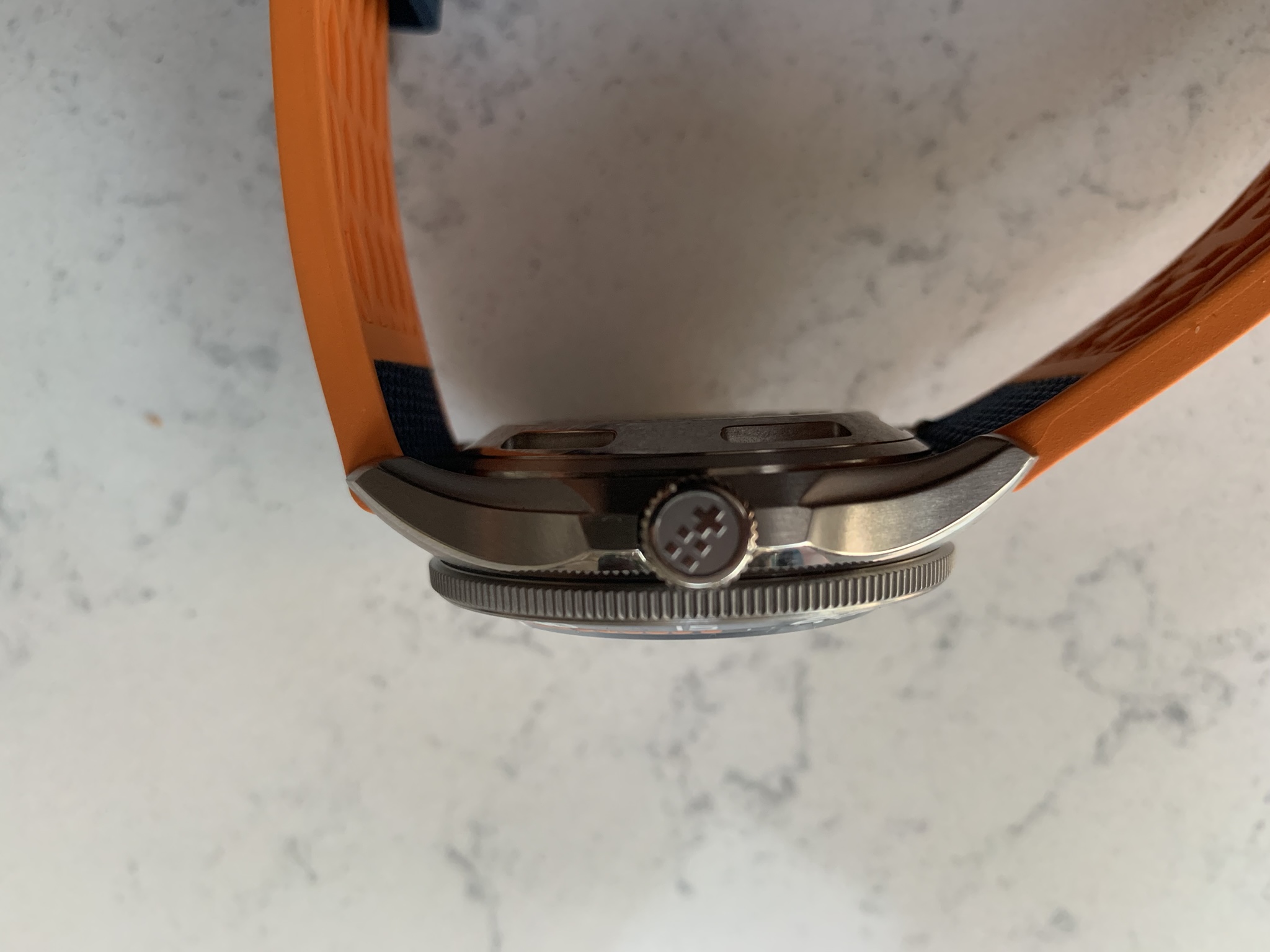 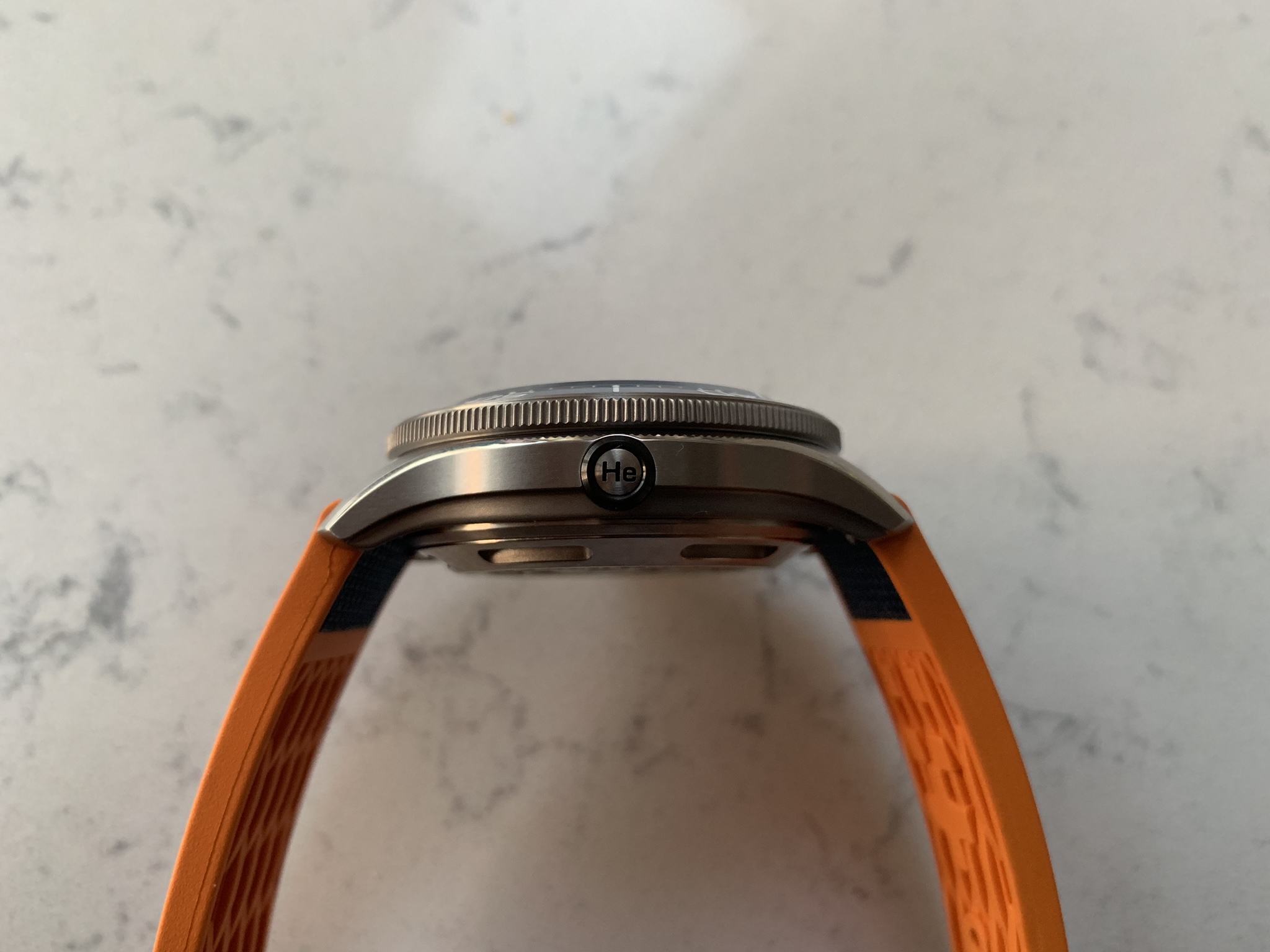 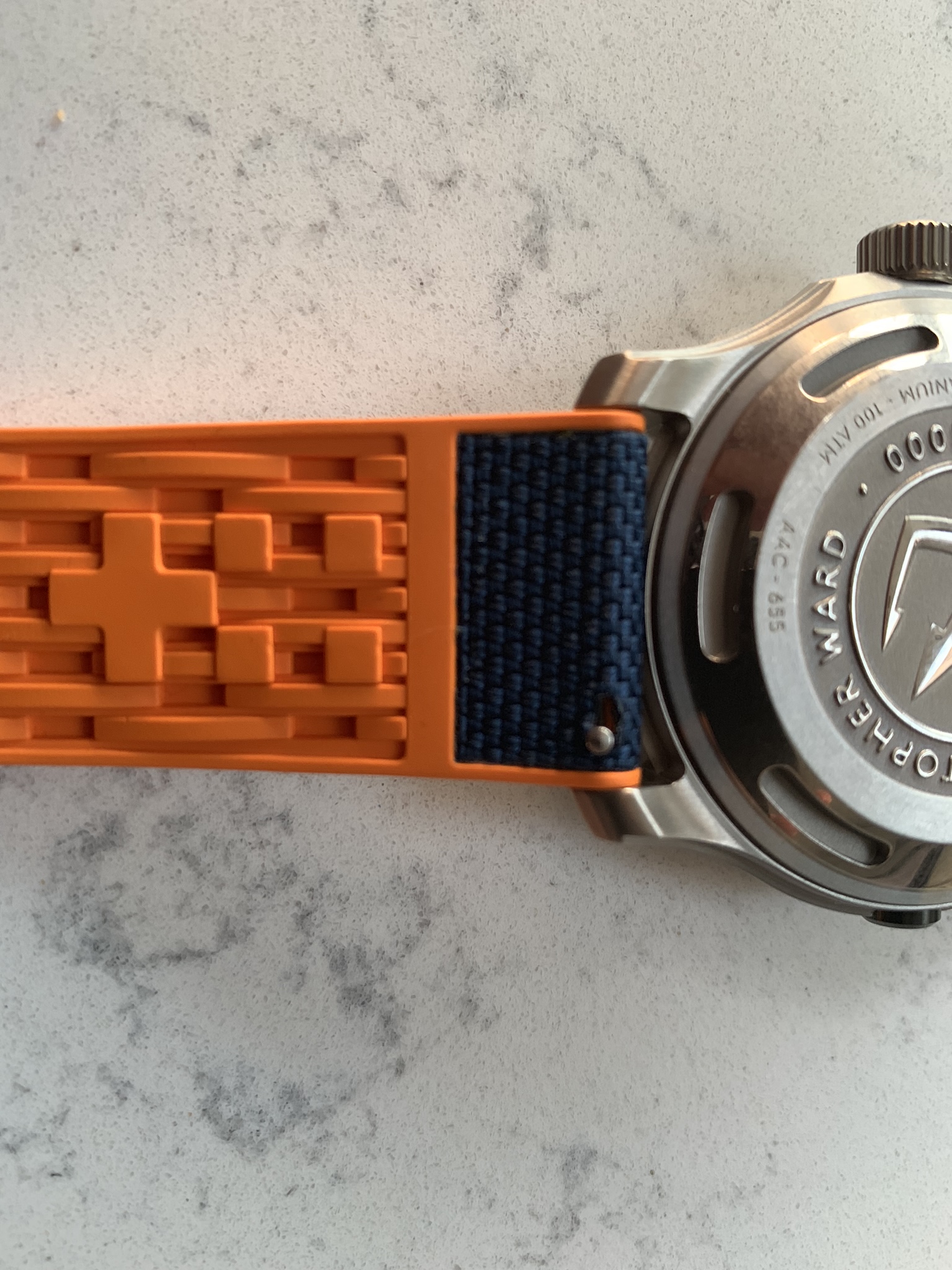 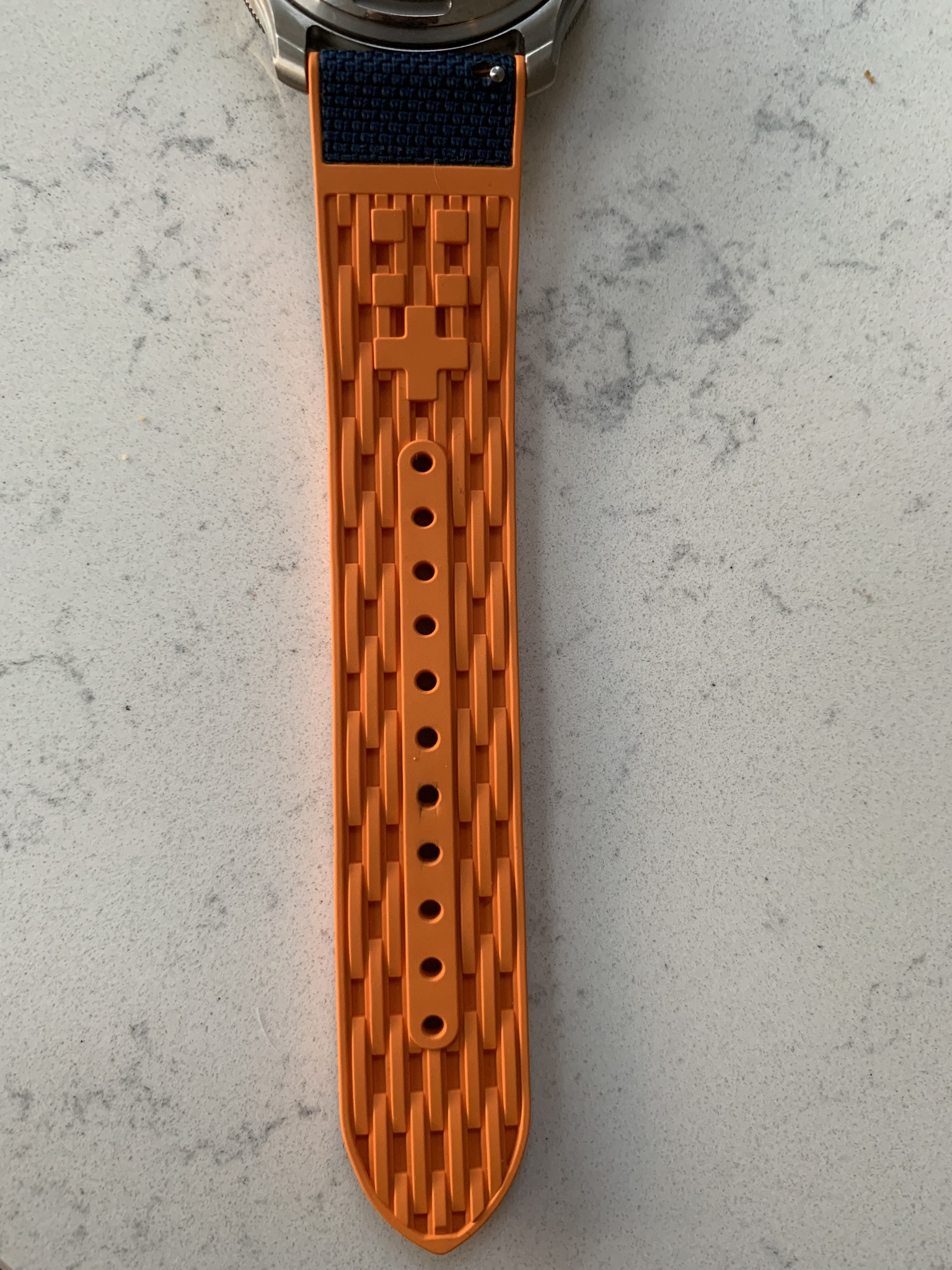 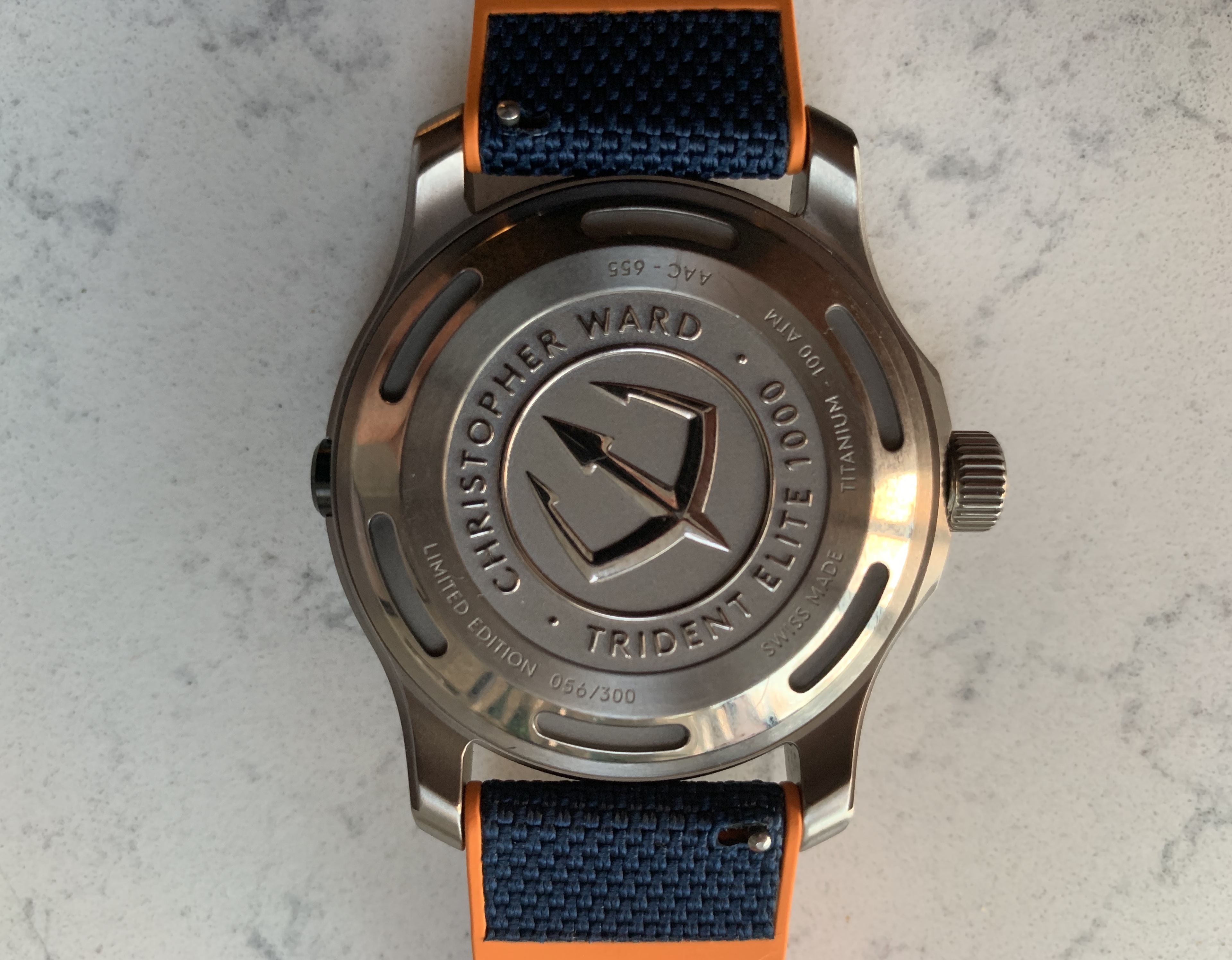 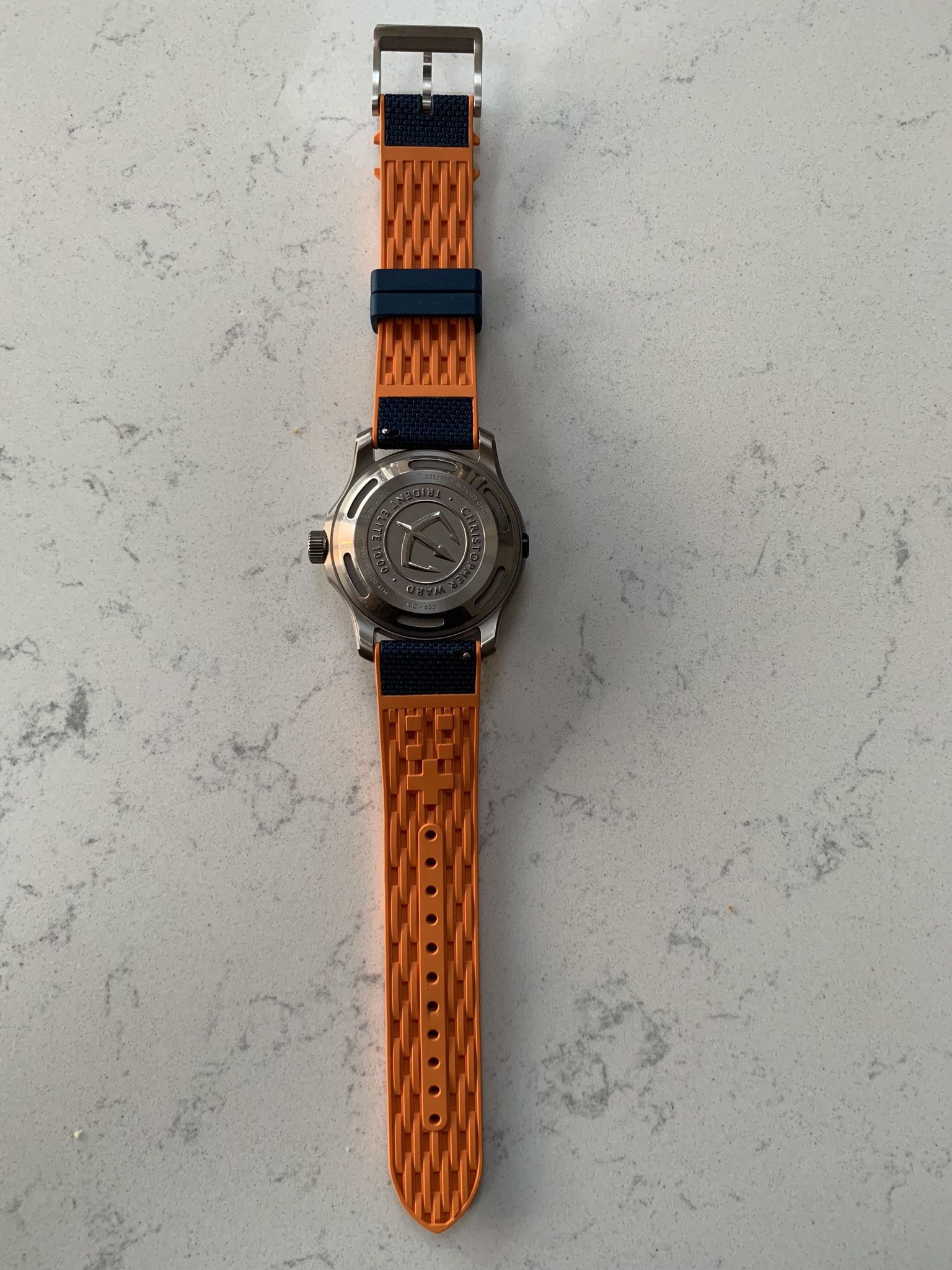 Great to hear your thoughts after living with it for a while. Thanks for taking the time to write it. I enjoyed it, especially the pics.

Thanks for an interesting, warts and all, write up. Very useful, particularly that the strap needs some decent bedding in.

A suggestion; you compare it with your lighter Sinn and that the Elite CW is quite hefty for a Titanium watch.

I noticed in the Ted's Corner specifications I put together for my Trident Mk3 - first look that the Titanium 1000 is 75g compared to the steel Trident Pro at 95g. I think the Titanium 1000 is heavier than expected as it needs to be beefier for the 1,000m WR. If that makes sense.

Thanks for the write up and great pictures. This is truly a stunning piece. Too bad they have apparently sacrificed wearability chasing a 1000 meter WR when so few if any will ever be put to that extreme. If going for a "desk diver", maybe one of the other new releases would be the better choice.
Time is fleeting....happy hour, doubly so.
Top

Bahnstormer_vRS wrote: I noticed in the Ted's Corner specifications I put together for my Trident Mk3 - first look that the Titanium 1000 is 75g compared to the steel Trident Pro at 95g. I think the Titanium 1000 is heavier than expected as it needs to be beefier for the 1,000m WR. If that makes sense.

Yes that makes sense. And I think it’s more a sensation than a pure numbers thing. Might be because the weight distribution is a little odd with the super light hybrid strap and the relatively high centre of gravity of the watch head due to its height. Also the bands sticks to your skin at the back (the way any rubber would and should) while the metal watch slides a little easier, so you get a little wobble or bounce of the watch as you walk, making it feel heavier than it probably is.

None of this is uncomfortable - it’s nice. I am making the point because one complaint people always have about titanium is that it feels cheap because it’s so light. No worries of that here!


Sent from my iPhone using Tapatalk

Excellent write up and photos of a great watch.

The point re Ti. When I bought my Luminor, I also tried the Ti model which was a chocolate brown dial, slightly more expensive but very nice. One of the reasons I didn’t go for it was that it was too light, you hardly noticed it. Quite a feat for a large watch but I felt like you wanted to know you were wearing this watch which had such visual presence.

So in short glad the Elite doesn’t suffer that same issue.
Patrick

I didn't like the bit about easily scratched, still not totally convinced by Ti (though it does have some good qualities) perhaps a hardened steel case (along Damasko lines) would have been a better choice for the top range diver. Just my two penn'orth as I do think this watch looks gorgeous and the hands now impress me as distinguishing.

It’s just the back for some reason that scratches easily. Maybe it’s because of the polished finish. The sides of the case seem fine and the buckle itself has been used on a MacBook Aluminum extensively, it’s fine fine as well...

McDaWisel wrote: ↑
Fri May 10, 2019 9:12 am
It’s just the back for some reason that scratches easily. Maybe it’s because of the polished finish. The sides of the case seem fine and the buckle itself has been used on a MacBook Aluminum extensively, it’s fine fine as well...


Sent from my iPhone using Tapatalk

Well, on the bright side (no pun) if it has to scratch somewhere, that's the best place! Good to hear the rest of the case is fine as I'm interested to see how this watch copes with real life.

Thanks for the follow up.
"There is no beginning to enlightenment and no end to training" - Dogen Zenji (1200-1253)
Top

Really surprised as you are that it seems heavy compared to the Sinn 103, which is a beast of a watch, but maybe that says more about the Sinn than the CW (I too sense that my 103 St is lighter than my C60 43 GMT - it probably isn’t (much), but it does feel so). My only experience of a Titanium watch is a Magrette Kara (Grade 5 Ti), and while it’s big, it’s really light. I don’t know enough about metallurgy to say whether the Elite’s Grade 2 Ti makes a difference in that sense. Good thing, as you say, is that scratches don’t seem to show - Titanium seems to be very forgiving in that respect, especially when brushed.
My name is 0uatiOW, but before you ask, no I don’t.
Top

Thanks so much for sharing your experience with your new beauty! Thanks for popping the pics on WUS, which helped me circle back over here for the full skinny.

Looks a great watch to me perhaps a bit tall in the body otherwise lovely.
Top

I'm not sure what this applies. Are you saying the bezel action is actually poor but has a rich sound? I thought the bezel on the MKII was pretty good for what it was. Many have said the MKIII is supposed to be even better too.

Is there any give in the movement of the bezel? Does it feel it could be forced (incorrectly) in a clockwise direction? If not that must feel secure.

Could someone upload a video of the bezel movement to try and indicate the sound described perhaps?
Top
Post Reply
53 posts