There has been quit a bit of discussion lately on the forum and on the enthusiasts Facebook page about customer service experience with CW, both positive and negative. It seems that people tend to post more if they have a negative experience, so in the interest of balance I thought I would share my recent repair experience with Christopher Ward.

I live in the USA, so I was prepared in advance for an extended repair time due to the time it would take to mail the watch back and forth on top of the normal repair time. I have never sent a watch in for repair to any company before so I was a little hesitant at first to do it as I was concerned they might not cover it under warranty and the watch would be gone for an extended period of time.

I purchased my first Christopher Ward watch, a C60 Vintage Diver in October 2017. In December 2018 I noticed that when I began to wind it after it had completely stopped, the hand winding mechanism would seem to grind and completely seize after just a few turns. This got worse over a period of a couple of weeks.

On December 26th, I decided to send it back for repair under warranty. I submitted a repair request and received instructions the same day. I emailed CS Manager Scott Callaway directly to ask a question about shipping and he responded the same day giving me direction and saying CW would refund my shipping costs.

On December 27th, I mailed the watch using USPS International Priority Mail. It arrived in England on January 2nd. At that point it got stuck in customs for several days. I emailed Scott Callaway who told me that CW would pay customs charges and get reimbursed later by customs once they file the appropriate paperwork. On January 8th, the watch was released from customs after CW paid the charges. It was delivered to CW on January 11th.

All told it took 16 days for the watch to be shipped to CW.

I received an email from CS on January 12th indicating they had received the watch and their current repair schedule was approximately five weeks.

On February 18th, I emailed Scott Callaway to inquire about the status of the repair. At that point it had been a little more than 5 weeks, since the original 5 week estimate. On the same day I received a reply from Scott indicating the watch had been signed out of their workshop that day and would be going through QC the following day and the shipped back to me. He also confirmed the repair was covered under warranty.

On February 21st the watch was shipped from CW and was delivered to me on March 2nd. A 9 day return trip.

All told the total time it took to send and receive my watch from the USA (including shipping) for a warranty repair was 8 weeks, 6 days.

When I received the watch I was expecting for it to be packaged in a travel pod. I was pleasantly surprised to see it was packaged in a new CW inner and outer box. Also included was a receipt showing a zero charge and indicating the repair was "Cleaned Reverse Wheels." There was a repair order form card that showed their diagnostics and estimated repairs. This card also showed they had tested the watch for accuracy and water resistance. Also include was another card "operating your automatic watch."

In conclusion, I wound the watch 20 turns to get it started and it wound smoothly. I set it at 6pm last night using my computer clock. 14 hours later it has kept perfect time to the second. I am very pleased with the entire process. Nine weeks was a Long time to be without my watch, but almost half that time was shipping to and from CW. CW was good to their word that the actual repair time was approximately five weeks. They also credited my shipping costs back to me within a few days of receiving the watch, so the entire process did not cost me anything. Great job by CW and great communication by CS Manager Scott Callaway and CS Rep. Katrina. 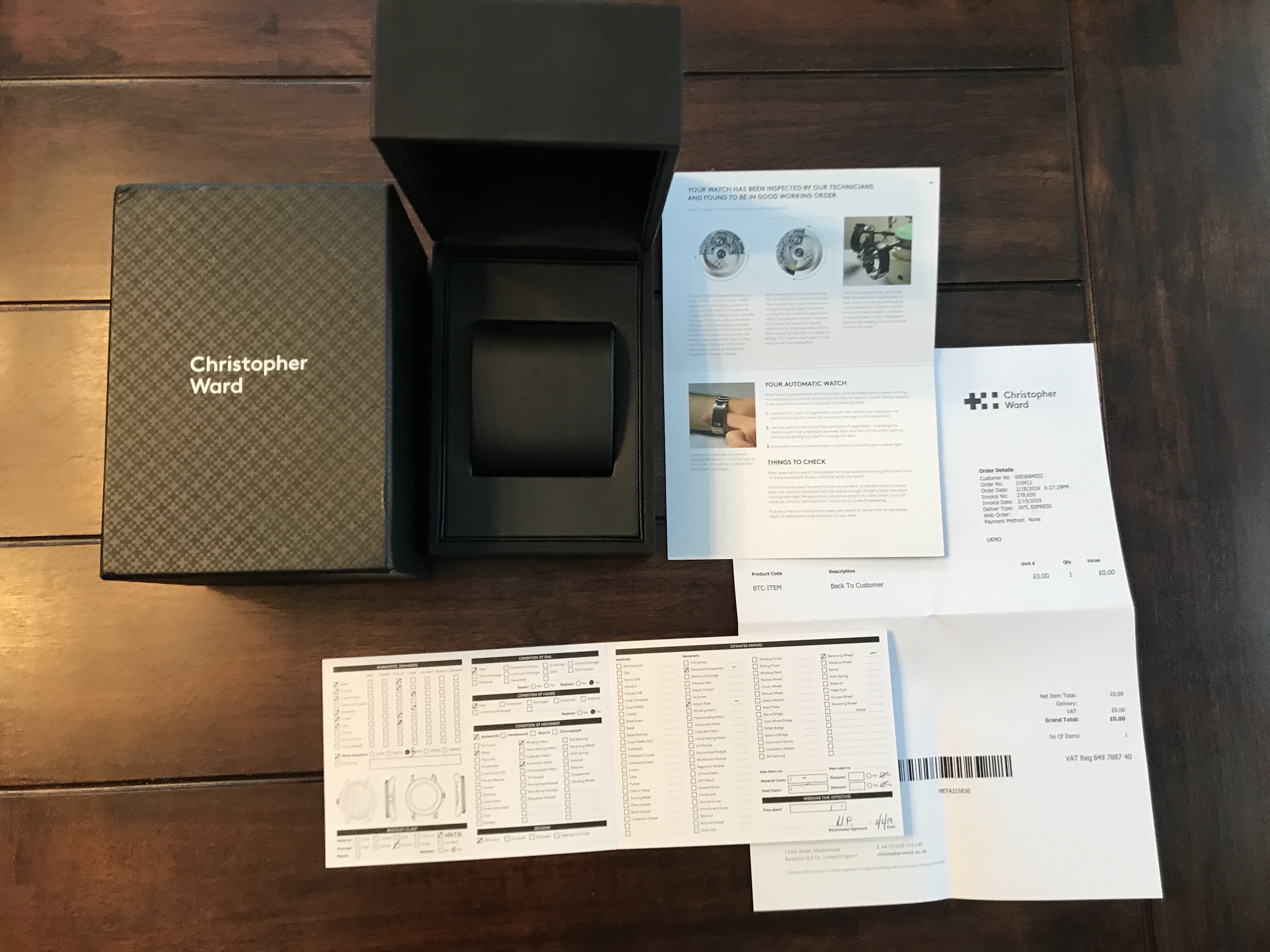 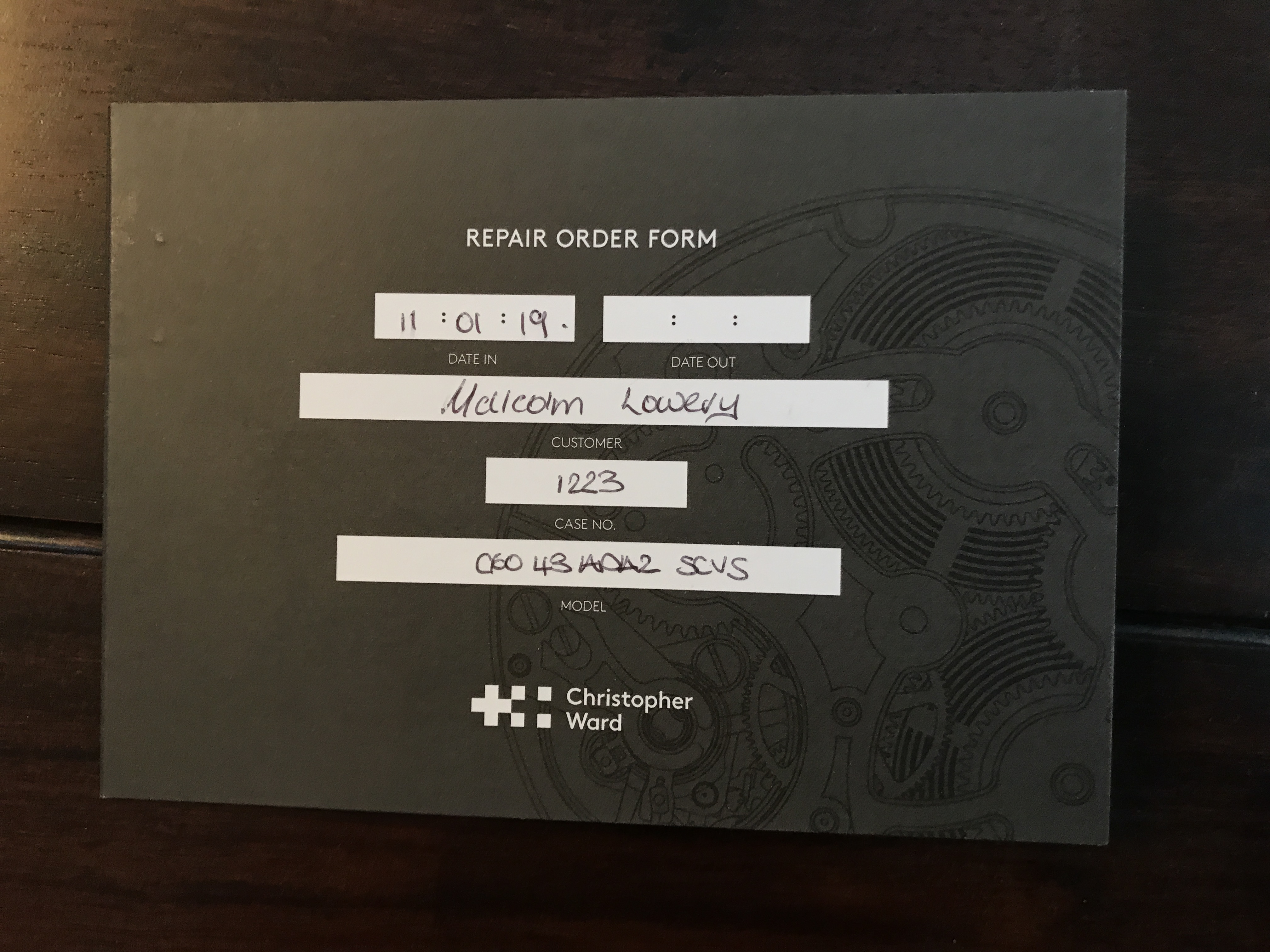 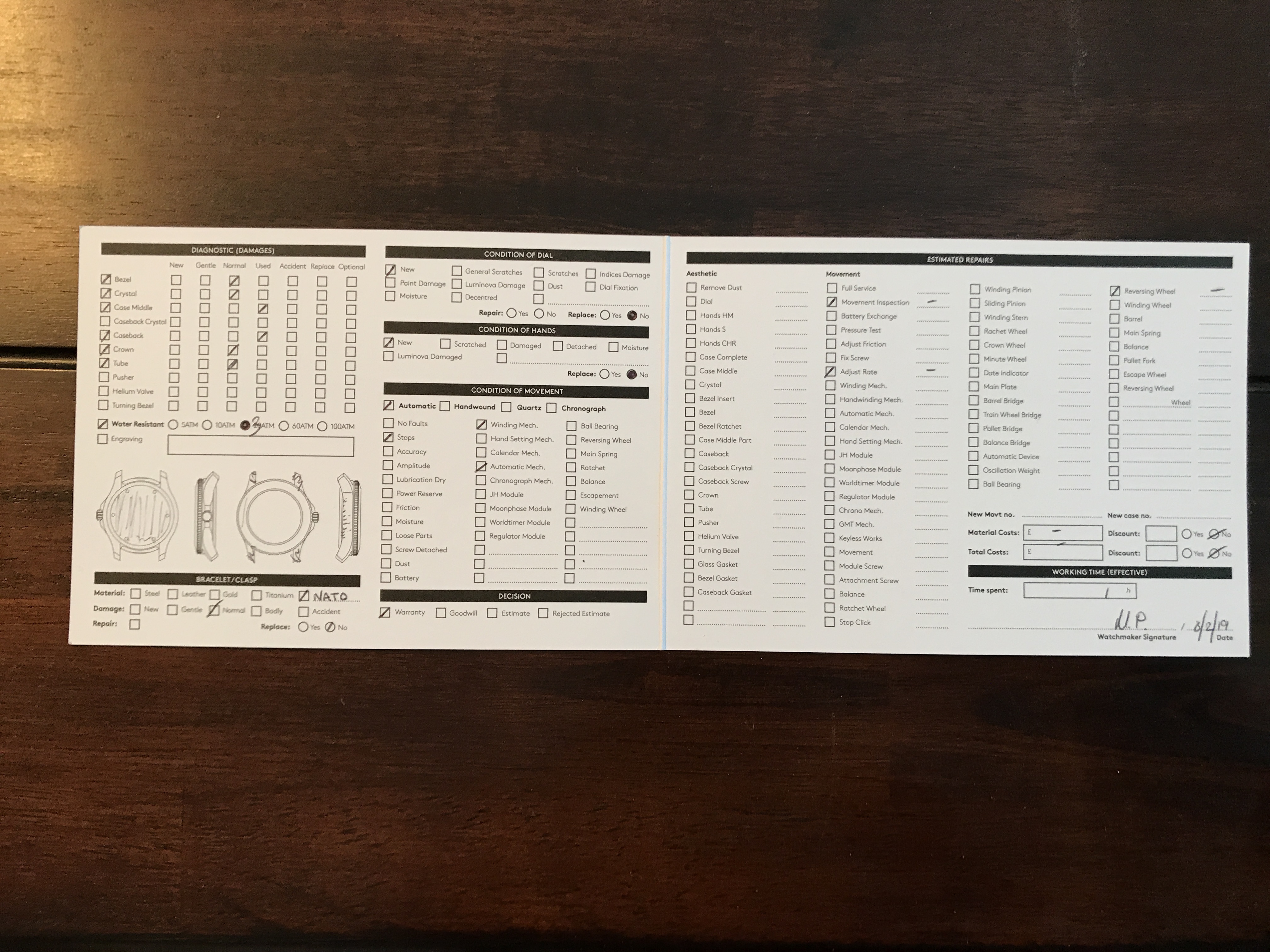 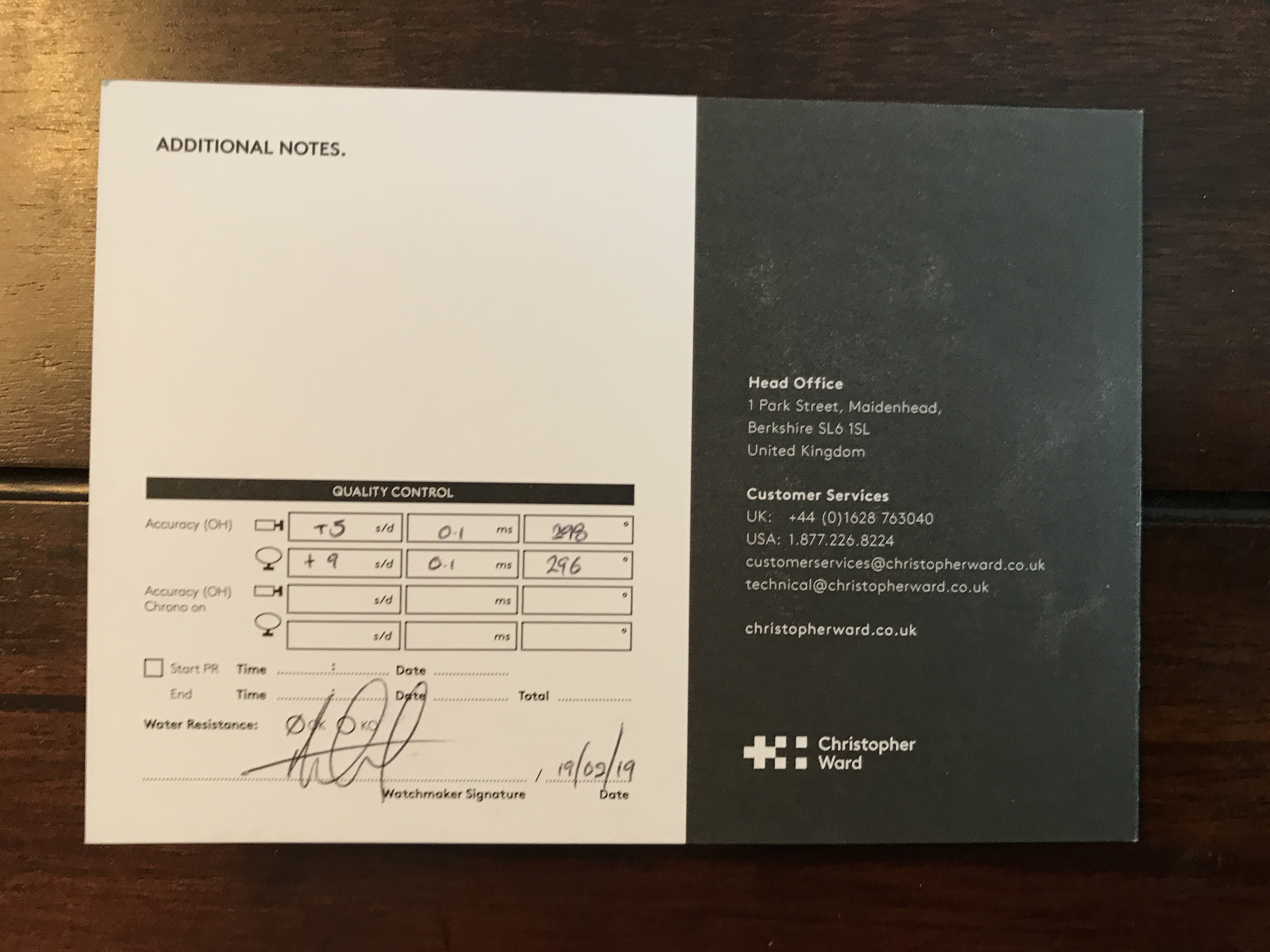 Hope I get same experience.

Thanks Paul. I hope you have a good experience as well.

Can anyone explain the accuracy chart on my last picture to me. I am not sure what the second and third columns mean. It looks like they tested the watch in two different positions at +5 and +9 seconds a day by the first column.
Malcolm

The s/d is the accuracy in two positions, I assume; dial up and crown down.

The angle is amplitude - the amount of swing in the balance wheel. Again I believe a figure in the 290s is very good.

That looks like a win-win, Malcolm.
Steve
The half minute which we daily devote to the winding-up of our watches is an exertion of labour almost insensible; yet, by the aid of a few wheels, its effect is spread over the whole twenty-four hours.
Charles Babbage

Hats off to both you and CW!
As you say, many of the population area all too fast to complain and few take the time to acknowledge good service when they get it.
All my dealings with CW have been positive, glad to hear you got the same treatment.

The angle is amplitude - the amount of swing in the balance wheel. Again I believe a figure in the 290s is very good.

Thanks for the info Steve. The watch has been running both on and off my watch since I set it 19 hours ago and is still at +/- 0 seconds according to my computer clock. I'm guessing they must have regulated it after the repair as I don't think it was quite that accurate before.
Malcolm

Jcalder68 wrote: ↑
Sun Mar 03, 2019 7:19 pm
Hats off to both you and CW!
As you say, many of the population area all too fast to complain and few take the time to acknowledge good service when they get it.
All my dealings with CW have been positive, glad to hear you got the same treatment.

Thanks for the response. I'm glad you've had positive experiences with CW as well.
Malcolm

Thanks for such an informative thread Malcolm.
Great to here the good side too as you said.

Sending off my C65 Trident Diver tomorrow morning for regulation as it's running over the spec.
Be interesting to see the time frame for when it arrives back.
As I'm not in the UK either it will take a small bit extra time to get to CW but only two days as I use a 48 hour courier service.
Ferg

When sending: does one re-pack in watch's original box to send back, or does some other packaging arrive with DHS (in USA)?
Top

They told me they couldn't return the watch in the packaging I sent it in so mine got wrapped in a couple of glasses polishing cloths, then lots of bubble wrap, then in a small box with polystyrene beads. That was enough for it to arrive safely and nothing there I'm precious about! (Plus it's a lot cheaper than sending the original packing)
Top

Foghornk wrote:When sending: does one re-pack in watch's original box to send back, or does some other packaging arrive with DHS (in USA)?

Why are you sending it back and is it for a Service/Repair, warranty work or 60/60 return?

If it is an older watch for service/repair use whatever you feel does the job to protect the watch.

Anything else, use the original packaging. If CW have arranged DHL, presumably they are covering the cost.

Either way, DHL do not provide any packaging.

I would remove strap or bracelet first. I’ve done that previously and CW were ok about it.
Basically, I'm for anything that gets you through the night. Be it prayer, tranquilizers or a bottle of Jack Daniels - Frank Sinatra

All You Need Is Love - The Beatles
Top

I "sent" them (ok, dropped off) mine in an old Hamilton service pouch/box as my watch was more secure in it than anything else I could've sent it in. They had advised to send it back in it's original box but I ignored that as it's big, bulky and wooden. I'm sure my watch would've rattled around in it as well. I was surprised when it came back in the same box I sent it in.
Top

Bungle-ator wrote: ↑
Tue Aug 18, 2020 1:11 pm
I "sent" them (ok, dropped off) mine in an old Hamilton service pouch/box as my watch was more secure in it than anything else I could've sent it in. They had advised to send it back in it's original box but I ignored that as it's big, bulky and wooden. I'm sure my watch would've rattled around in it as well. I was surprised when it came back in the same box I sent it in.

Why were you surprised for it to come "back in the same box I sent it in."? Didn't you want it back?


It may, or may not, surprise forum members to know that CW have a room at CW Towers* with a racking storage system, dedicated to the temporary storage of watch boxes, travel cases et al that belong to, and with, customer's watches that are in for repair / servicing.

The reason that CW ask for watches to be sent to them in their original boxes, is that these are readily stackable having three straight sides whilst travel cases, glasses cases, bubble wrap inside an old sock etc., generally do not and therefore give CW a headache as to how to store them.

* at least they did when I visited with the Admin Team last November.

If you’re sending it back for a refund within 60 days, You must include all original packaging and the watch must be in an unworn condition.

If you’re sending in for repair, you can send it back on its own - they just told me yesterday that prefer it on the strap, but will accept just the head, and the decision was up to me. I normally wrap in lots of bubble wrap, put it in a small box, and wrap the box in more bubble wrap, then put that in the bag they send out.
My name is 0uatiOW, but before you ask, no I don’t.
Top
Post Reply
18 posts