What's up with this?

I set my C1 to the exact time about 3-4 weeks ago... today I fired up time.is and looked forward to setting the watch to the correct time, only to find that it's dead on. Not a single second off...

To be perfectly honest, the watch has been fluctuating plus/minus 3 sec during these weeks... but that's well within COSC limits.

I'm seriously impressed with the accuracy of the SH21 movement!
Good job, CW! 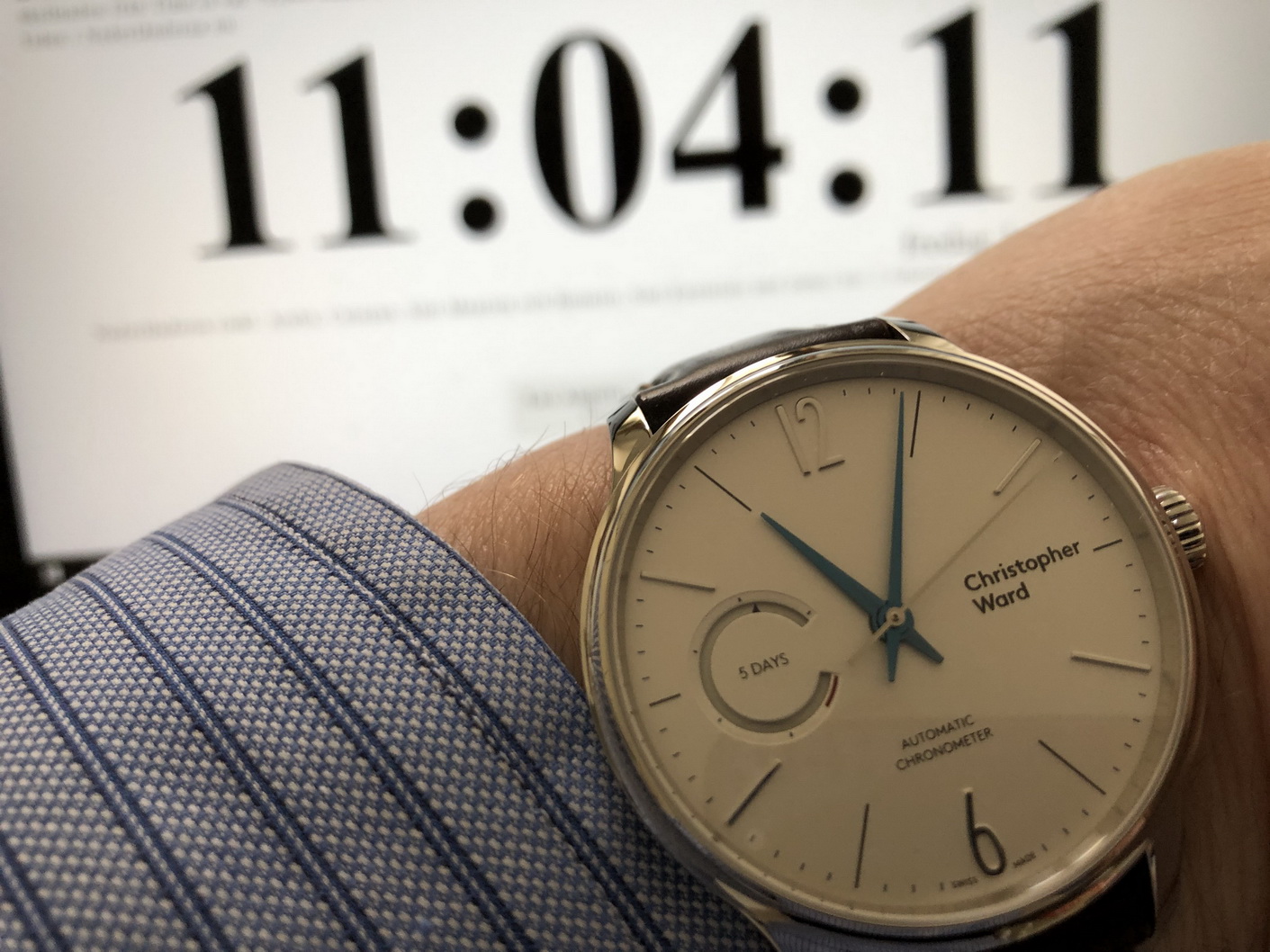 Brilliant, and you haven't even got a date to change.

Anyone else fed up of these posts that moan and criticise!
Steve.
Top

Anyone else fed up of these posts that moan and criticise!

I was dying to look and see that this was his first post to see the reactions! gutted!

On a serious note, fantastic result that

Just in case anyone thinks differently, MY POST WAS A JOKE!

Anyone else fed up of these posts that moan and criticise!

Time to to flip it, obviously and let somebody else deal with the problems...

But seriously, SH21 is up with the best. Needs a while from new to run in and settle, but then seriously accurate and a real pleasure.

A timely thread as I took my C8PR out of the safe this morning and set it for a weekend away in Switzerland - not far from Bienne as it happens.
"There is no beginning to enlightenment and no end to training" - Dogen Zenji (1200-1253)
Top

Its about time you took this forum more seriously, Steve

You are getting seriously paranoid now - some of us can still recognise a wind up (sic) when we see one!
"There is no beginning to enlightenment and no end to training" - Dogen Zenji (1200-1253)
Top

Congratulations. Aside from the terrible disappointment of excellent time keeping I hope you are enjoying the watch. This is another great demonstration of the fact that the SH21 can run very reliably and be very precise when regulated properly. Thanks for a fun post.
Mark
Bremont, Casio, Citizen, Christopher Ward, Omega, Orion, Oris and Seiko
Top

How disappointing that you have lost the special interaction with your timepiece. What was CW thinking building a watch to perfection. Rather than return, I would suggest some rough duty to knock it back to reality.

My own experience with the SH21's has shown that they are off of perfection by at least +/- 2-3 seconds on a regular basis. I am sorry that you have acquired a perfect timekeeper.

Great accuracy and a super looking watch to boot

Beautiful watch and yes a fantastic time keeper.
Hope mine returns from CW soon. Stopped self winding.
Before it broke down I enjoyed watching the power indicator increase charge as I wore it. Loved that bit.
Can’t wait to have it back.

It sometimes seems to be the case that when watches are worn consistently over a period of time the little inaccuracies iron themselves out. I experienced this with my C60 Trident 600 GMT in Cyprus over Christmas, where I checked it after 10 days. It was the only watch I had with me. 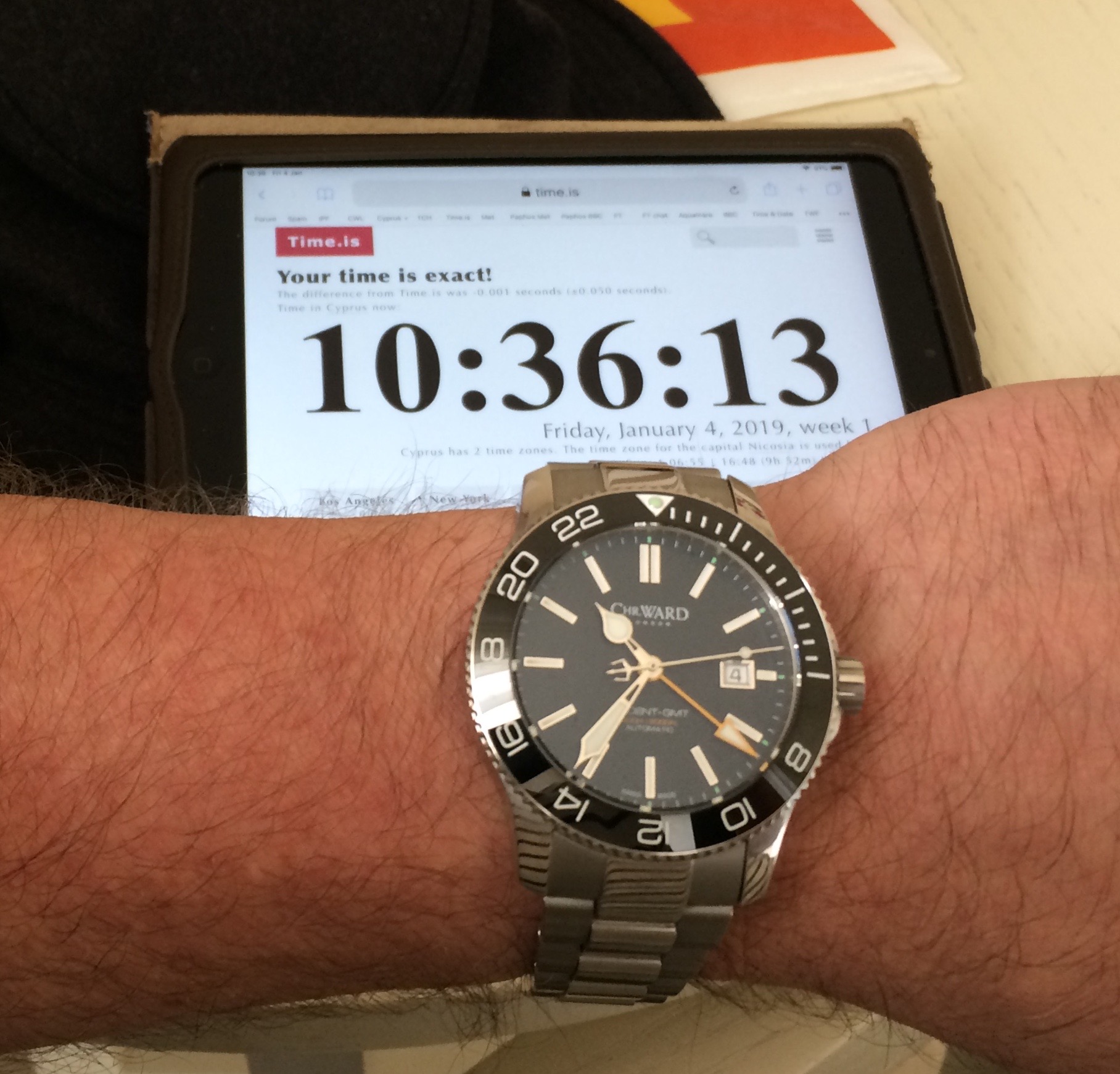 It really is rather nice when that happens.
Steve
The half minute which we daily devote to the winding-up of our watches is an exertion of labour almost insensible; yet, by the aid of a few wheels, its effect is spread over the whole twenty-four hours.
Charles Babbage

Amor Vincit Omnia wrote: ↑
Sun Mar 03, 2019 6:15 pm
It sometimes seems to be the case that when watches are worn consistently over a period of time the little inaccuracies iron themselves out. I experienced this with my C60 Trident 600 GMT in Cyprus over Christmas, where I checked it after 10 days. It was the only watch I had with me.

It really is rather nice when that happens.

I think you're right, the more the watch is used, the better it runs.

I got my C1 about ten months ago. The first six months or so, it was frequently used but not frequent enough to have it on fully wound all the time. When not used, it was just sitting on a shelf, motionless. It was decently accurate, within COSC limits, but just barely.

I got a watch winder a few months ago. Now the C1 is in the winder when not in use. It's never allowed to stop, it's always on more than half power reserve. It's frequently in motion. The winder runs on a program, so the rotation stops at regular intervals. Which means that the watch is always in different positions when motionless.
The accuracy is now much better (as indicated in my original post above!)

I think the (almost) contsant motion and the fact that it seldom rests in the same position for a long time helps the accuracy.
Watches like to be used, it makes them run better!