Manager of the Month - April

Yes, out of nowhere, we have a new Manager of the Month:

Congratulations to Guy who is April Manager of the Month

. And commiserations to Mark, who must feel as though he's had it stolen from him.

In the overall standings, however, there has been no change in the top 3, although Garry's lead is now down to just 10 points: 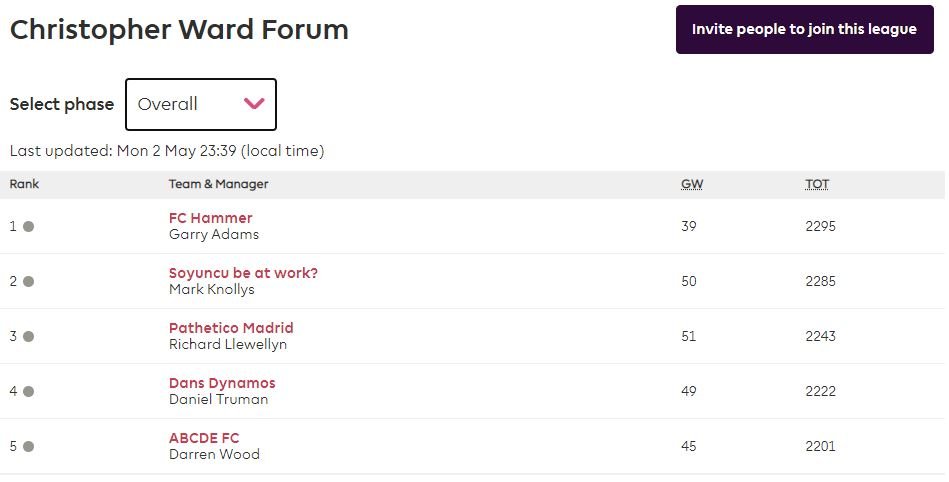 Don't forget to get your team selections in by 13.30 Sat 7th May for the next gameweek. There are quite a few teams playing twice in this gameweek.

Good luck everyone for the final month.

I'm not sure quite how I managed that either, having been in 11th - 14th spot in the league each month up until now; other than I played a Wild Card on 1st April for GW31 and made 9 transfers.

Something must have worked.

I'm looking forward to the remaining weeks of the season.

As we're getting towards the sharp end of the season, I thought I'd do an intermediate update now, after Gameweek 36, particularly as there has been some movement at the top of our league rankings.

GW36 was a big week, with many teams playing twice and many managers playing a Bench Boost or Triple Captain token. There was also a big disparity in scoring between some of the high scoring players, e.g. Salah and De Bruyne, which gave some big differences in team scores depending on who you selected and who you chose as your captain.

Well, the one person who made all the right choices was Richard, who scored 176 for the week and zoomed up from 3rd place to 1st place with a 50-point lead with two weeks to go: 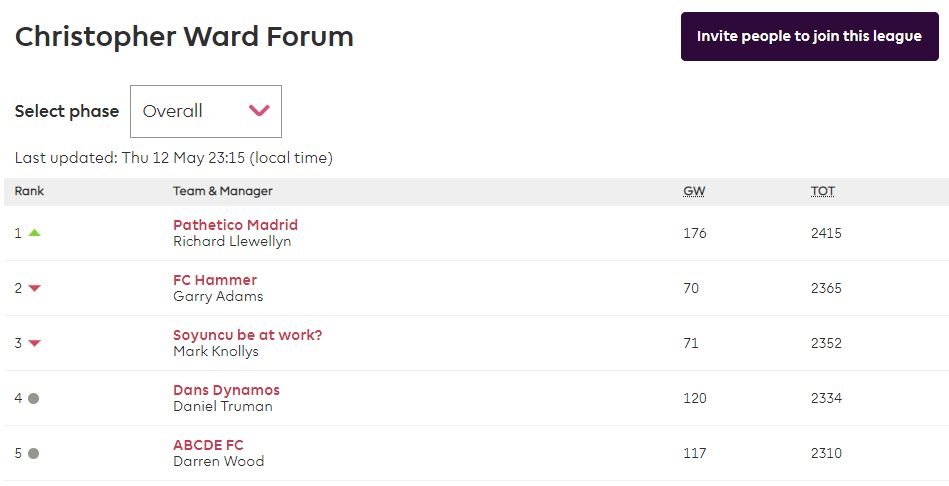 Can Richard hold on for another two weeks? Can Garry, Mark, Daniel or Darren make a move and catch him?

These users thanked the author welshlad for the post:
A1soknownas

That's a lot of points, if we include transfer penalties more than twice as many as I got - well done Richard!

I'm still hoping to finish in the top half

These users thanked the author suicidal_orange for the post:
rich3586

I've managed to lose a 50+ point lead in most of my mini leagues in the last 5/6 weeks. Some bad luck and some awful decisions.
Top

A lucky week with big Kev as captain. Hard to tell who is going to play all the time at city.

These users thanked the author rich3586 for the post:
sproughton

Ok, so here's the position in our league after GameWeek 37, with just one round of matches left tomorrow: 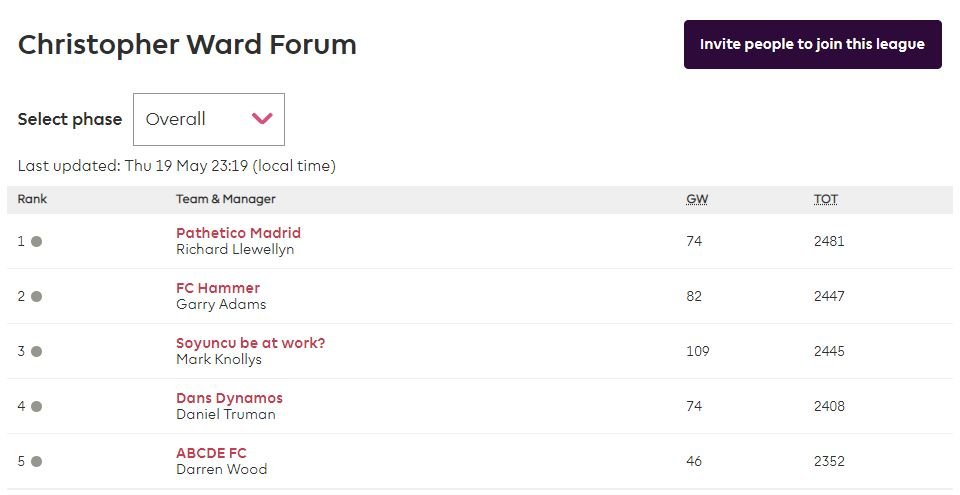 There is no change in the top 5, but Garry has closed the gap at the top to 34 points, and Mark is now only 2 points behind Garry.

So, who will prevail at the end of the season? It may come down to who has any special tokens left to use and who can best predict the results that are often quite unpredictable in the final round of games, where some teams have loads to play for and others aren't so bothered anymore.

Just a final reminder that the deadline for selections for GW38 is 14.30BST on Sunday 22nd May (i.e. tomorrow).

These users thanked the author welshlad for the post:
A1soknownas

It's time to reveal who is our CW Forum Fantasy Premier League Manager of the Season 2021/22.

But before we get to that, what about Manager of the Month for May?

Manager of the Month - May

Well, here are the top 3 managers for May:

There's no surprise that Richard won this after his storming week in GW36. But there are also high commendable performances from Joe and Daniel. Well done guys; a good strong end to the season for each of you.

Back to the main prize. It's been a long, hard season - but also very enjoyable. Here are the final standings at the top of our league: 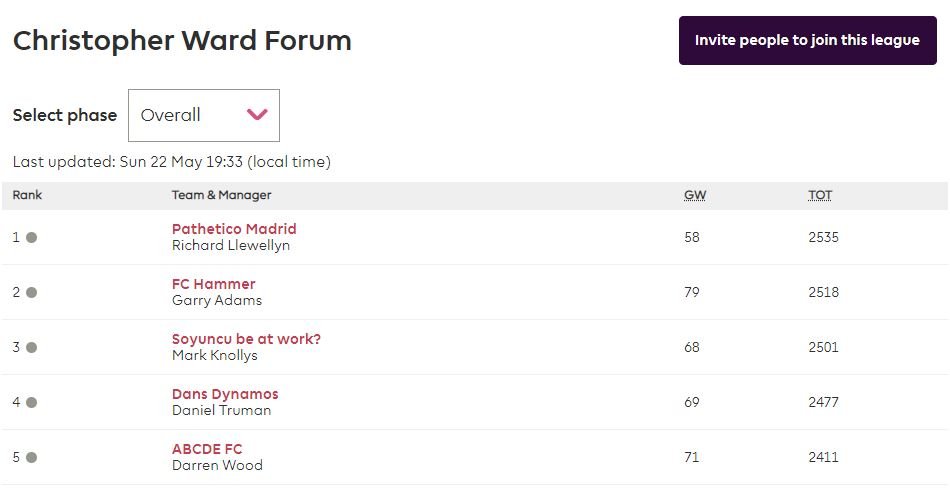 Congratulations (again) to Richard for taking 1st place. He made his decisive move in GW36, although Garry did well to claw him back to just a 17-point lead in the end. Hard luck to Garry and Mark on just missing out, but getting scores over 2500 is definitely something to be proud of.

So that's it for another season. Enjoy a couple of months or so off from the football and before we know it we'll be back in August for the new season.

These users thanked the author welshlad for the post (total 3):
A1soknownas • sproughton • rich3586

Is this thread about soccer or American football?
Top

[i.e. soccer, as it's called in your part of the world.

These users thanked the author welshlad for the post:
Bahnstormer_vRS

[i.e. soccer, as it's called in your part of the world.

Ok. I thought this whole time I was dealing with the mouth breathing fantasy football people in the US.

The KDB captain in big bench boost week 36 was a wise choice.

Thanks to welshlad for providing the updates throughout the season.

I'm happy with 5th. A bit like Liverpool at Anfield on Sunday, I did dream for a very short time that I had a chance.

I'll be back next season. At least we won't have the lottery of covid hopefully but Qatar 22 mid season might bing some fun instead!

These users thanked the author A1soknownas for the post:
rich3586

I was saying to a friend in another league that I made the mistake of chasing a high rank rather than focusing on the mini-leagues. Gambled trying to get from 25k in the world at the time to top 10k and ended up only just staying in the top 100k!

Crazy season with all the double gameweeks - definitely one for people who plan ahead. Looking forward to a slightly more normal season next year.

These users thanked the author sproughton for the post:
rich3586

Thanks! My highest ever total, beat my previous best by 171.
A mad season with all the last minute cancellations and extra double weeks but been fun.
Top
149 posts