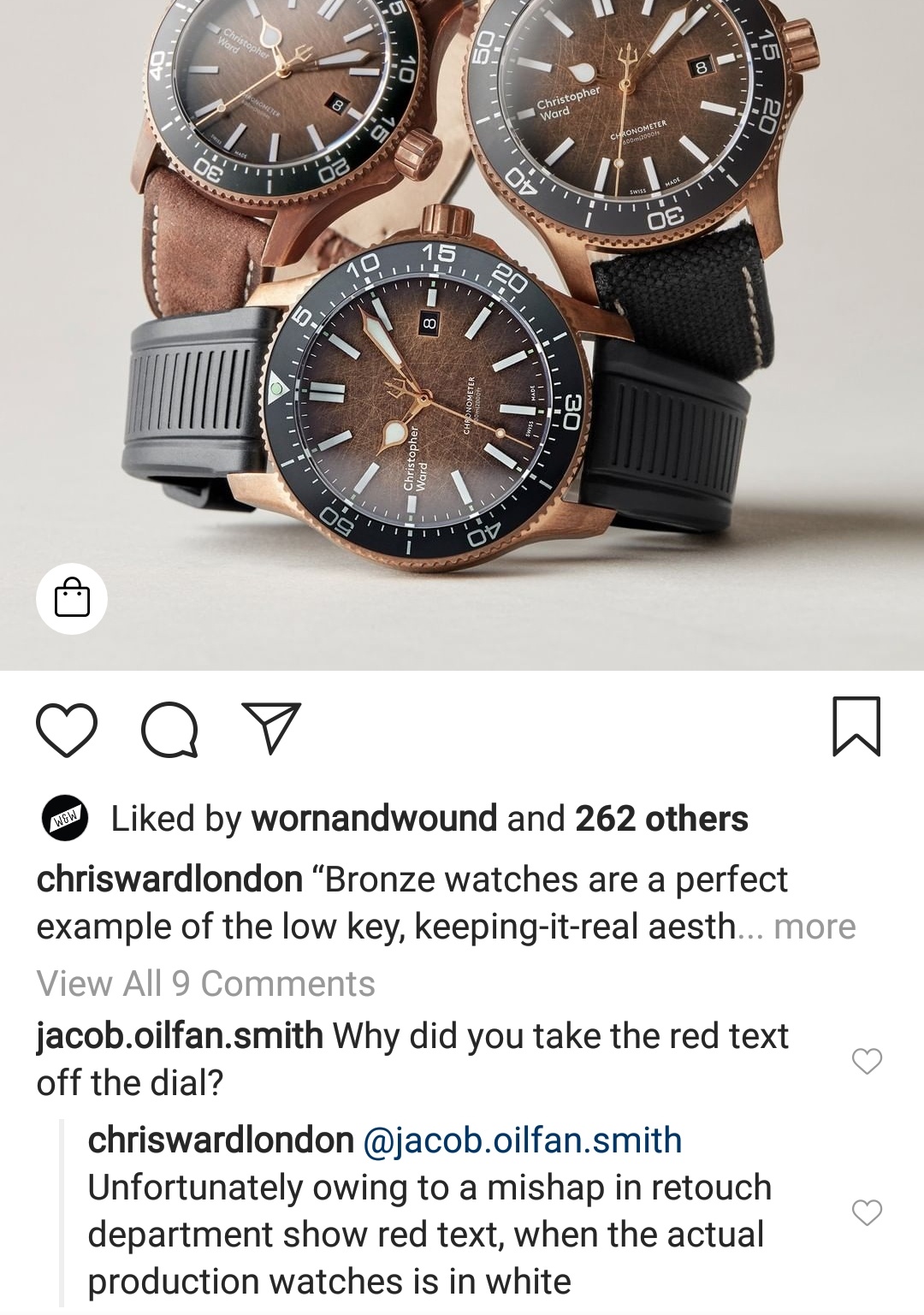 Probably a bit more attention to sentence detail needed when responding to customers too!
Jon

This. It pi**ed me off the first time I saw it in Loupe but said nothing about it. Now they have made it part of their on-the-street advertising. I really, REALLY dislike companies signalling politics. The USA has become ridiculous with it. Bad move CW- I hope you are happy with the demographic you are appealing to buying one watch and calling it done.
WatchChat on Facebook
The friendliest watch group on Facebook chatting about our watch passion and whatever else happens to come up.
Top

All I will say if that I’m not sure if the Great British public can be relied on to do any research!!!!


Sent from my iPhone using Tapatalk
Watches - Too many but not enough!
Top


Isn’t that the main customer demographic? Men of a certain age? I know they’re trying to get a younger base, so perhaps that’s why they’re trying to be a bit more edgy. Does make the whole spiel about the importance of branding sound a bit hollow by going for the younger sounding chriswardlondon rather than the more staid sounding Christopher Ward. There have been a couple of occasions where they’ve seemed to have loosened their adherence to the official branding, and this is one of them.
My name is 0uatiOW, but before you ask, no I don’t.
Top

Agreed. It upsets more people than it appeals to. Trendy, edgy? Nah, stick to good business and first class products.
"There is no beginning to enlightenment and no end to training" - Dogen Zenji (1200-1253)
Top

I'm new here looking for more info on the new Worldtimer , although I have previously owned a couple of CW pieces .
From the US , proud Republican , BUT I prefer my watches to remain politically neutral, they are marketing/selling a brand worldwide, with the US as a large consumer of timepieces , why potentially alienate 1/2 of your market ?? Especially when promoted by a entity outside of the USA , we can squabble amongst ourselves but our hackles get raised when puns/insults/digs come from abroad. Would the British market appreciate an American watch company slighting or poking fun at the Queen as part of their ad campaign ?? I think not ..
And finally "Are We British Enough For You?" on timepieces clearly marked Swiss Made ??? What does that even mean ??
Oh and Thanks for the warm welcome I've received on the forum even though I spell it color instead of colour !!! LOL
Neal
Top

No problem Neal, stay with us and we'll soon get you speaking and spelling English correctly.

That video is ridiculous. Totally wrong way to advertise imo.
Also, i use different tubes every single day and havent seen a single one yet.
Top

Whilst remaining largely ambivalent towards the posters I do like the video. Disruptive (sic)? Certainly, but it seeks to disrupt and question some common preconceptions about the watch industry.
Steve
Linguist; retired teacher; pilgrim; wannabe travel writer

Since Helen has asked for my feedback I can only say that the current advertising campaign did not hit the spot for me.

That said I'm not the Target audience.

I'm confident however that we will hear at a later date that it was a blinding success.

The 20 second video is a bold move, with CW doing something different (or dare I say disruptive!

), as the manner in which it is constructed ignores all the normal content that would typically be expected in what amounts to the equivalent of an elevator pitch.

However it may well be that where Helen has stated cross-track posters, she also means those alongside the escalators. I will have a look when I am at Waterloo on Wednesday. As I will be avoiding rush hour I will at least have the chance to see a cross-track poster on the Waterloo and City line platform - not something that would be so visible during morning or evening rush hours!

The results of my field test, following what is fortunately now only a rare trip to London yesterday.

Didn’t see any posters, as the Waterloo and City line was closed all day due to industrial action.

Had to get the Jubilee line to London Bridge, then Northern line to Bank. Five deep on the platforms, with thousands of angry, tired commuters meant no visibility of any cross-track posters. Quieter for the return journey - but still no site of any posters.

Back on to the station concourse at Waterloo. Platform for home train not on board, giving about 10 minutes to “search” for the Video, that I knew was there somewhere! Found it and managed to just about take a pic, before it disappeared.

As someone who knows the brand, I think it becomes more difficult to judge the video content, however I didn’t think it was at all impactful and it certainly would not have set me off to do my own research, assuming I noticed it in the first place.

I commuted to London for about 15 years and can’t really recall paying any attention to either cross-track posters or videos above the concourse. I don’t think that regular commuters do, as they are focused on getting to work in the morning, and getting on the first available train home in the evening.

The only posters that I used to notice were those situated alongside the escalators. 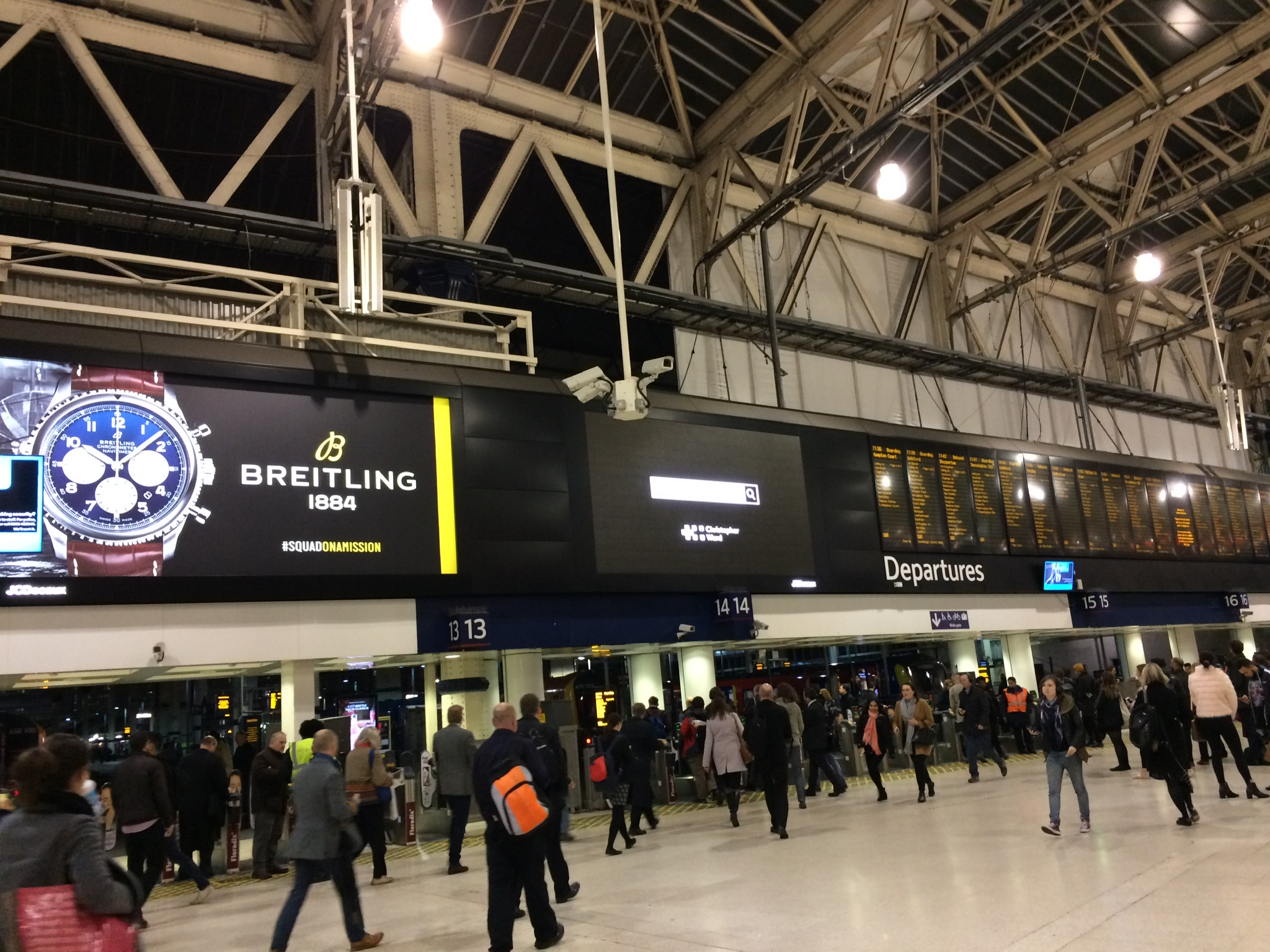 thanks for the research Neil. i think along the same lines as you and think that advertising does very little to impact my buying decisions. the one i never get is Yokohama tyres on the chelsea shirts, i asked my brother in law about it as he is a bit more corporate savy than me and he said its just about brand awareness, whatever that means! all i know is i wouldnt go in to a tyre shop and specifically ask for Yokohama though.
Current collection = Omega Seamaster 2225.80.00, Omega Speedmaster 'Moonphase' 3576.50.00, Bretling Aerospace Evo, Vinatge Azur, Vintage dressy Seiko & SBGX059
Top

Advertising, brand awareness, media campaigns are all amount to the same thing, getting out to a bigger audience, nothing more, nothing less, the most important thing is targeting, and nobody on the forum needs targeting as we are all highly involved and engaged with the brand already.

The most important thing to note about the picture is the Breitling advert, new modern looking logo (sans wings) and a hashtag, both of which aim to a younger audience, especially when you see the wording of the hashtag! "squad on a mission" is not something a traditional Breitling customer or collector would say, let alone use a hashtag of on social media!
Andy

golfjunky wrote: ↑Thu Nov 08, 2018 10:08 amthe one i never get is Yokohama tyres on the chelsea shirts, i asked my brother in law about it as he is a bit more corporate savy than me and he said its just about brand awareness

I think when you get to premier football, the advertising is World wide. Every premier game is shown live here in Thailand (and all over Asia and Australia as far as I am aware) and Liverpool, ManU and Chelsea, along with Barcelona, are the big teams (and Leicester when they won the league), and Yokohama are a major brand here. I'm not sure how much their decision to sponsor Chelsea was to do with the UK?
'Tis me
Top
Post Reply
71 posts