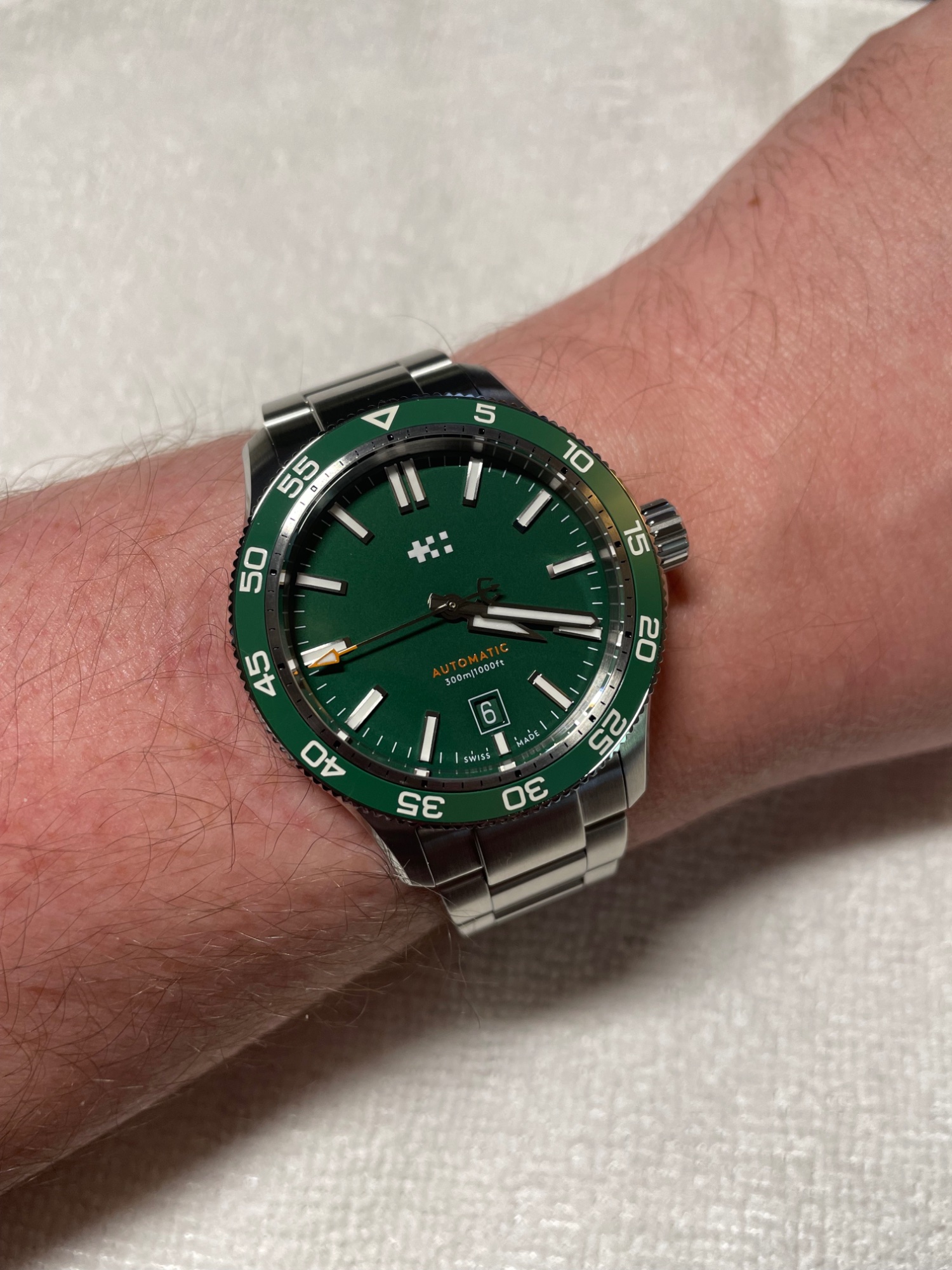 I received my 40mm green Trident today, the product of a swap I made with the DHL courier. He gave me the Trident, shiny and new from Christopher Ward, and I gave him my green Aquitaine, also shiny and new but headed back for the next nearly-new sale. I'd decided that two Aquitaines was one too many, and I figured a green Trident was a reasonable enough substitute.

Let's talk about the Trident. The green dial is a little more vibrant than the Aquitaine, but less shiny, if that makes sense. It's a deeper, richer green that isn't clouded in the boxed crystal or sapphire bezel of the Aquitaine. It's nice! It isn't nicer than the Aquitaine, per se, it's different. The bezel is simple and clean, and the numbers, incremented in steps of five around the dial, are readable. There's no color contrast on the bezel like I think there used to be. Only white. That's good. The stainless steel ring inside the bezel with the minute tick marks is a really great little design touch. It doesn't rotate with the outer bezel. 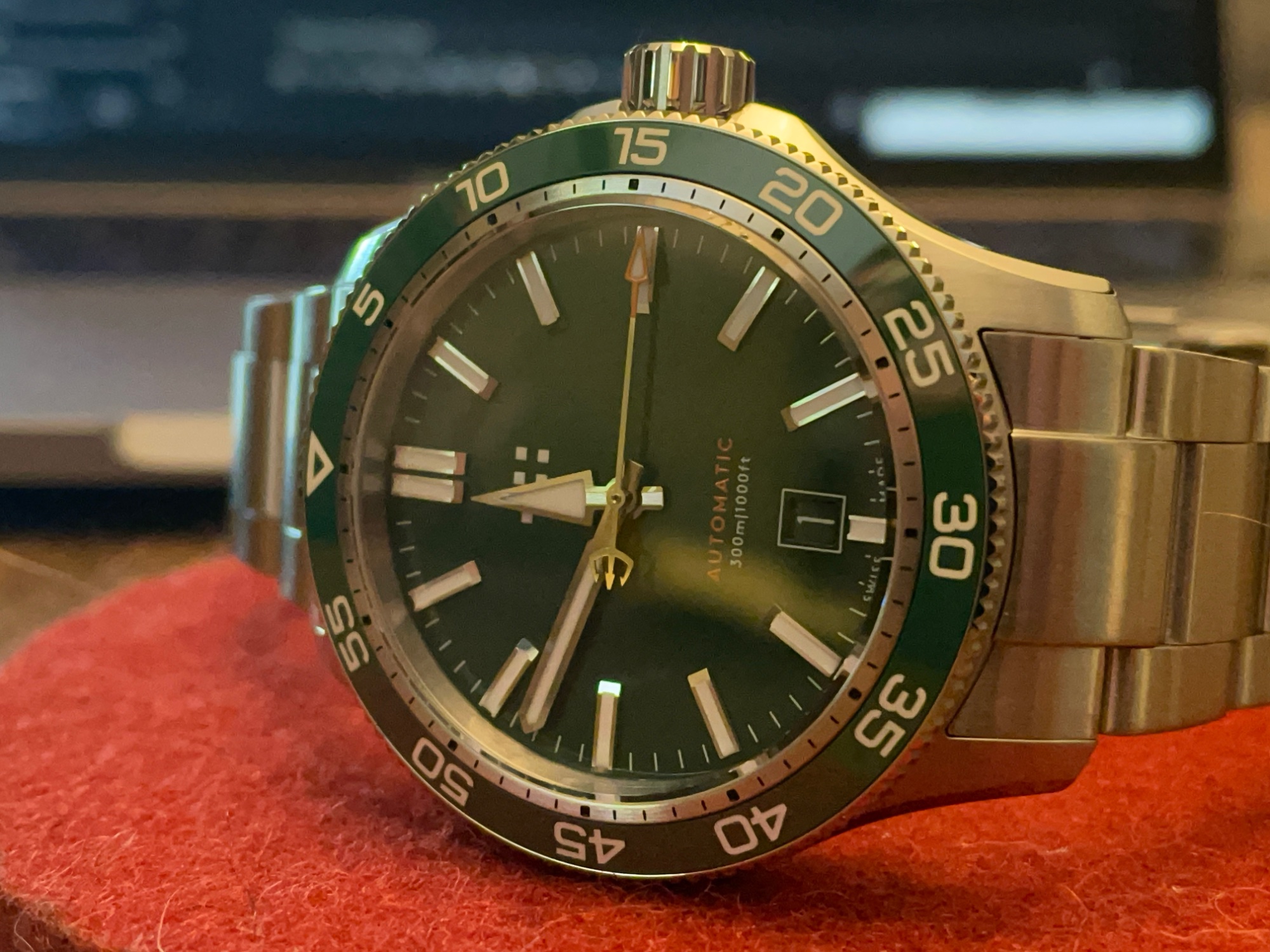 The handset feels longer and skinnier to me than other CW watches. The arrow on the second hand is a subtle-but-present orange. It provides enough weight and contrast to be readable, but it does not distract. The date wheel is color matched to the dial, and the new Swish logo is painted on in a complimentary white. The light catcher case is the same case we've come to know and love. The crown guard doesn't interfere.

In one last comparison to the Aquitaine, the bracelet here is very similar. The screws are one-sided, which is a big improvement over the two-sided Aquitaine screws. They require quite a bit of force, and I think a large screwdriver. I used my second-largest jewelers screwdriver but could've used a size up. The screws sit flush against the bracelet now, and look really great. 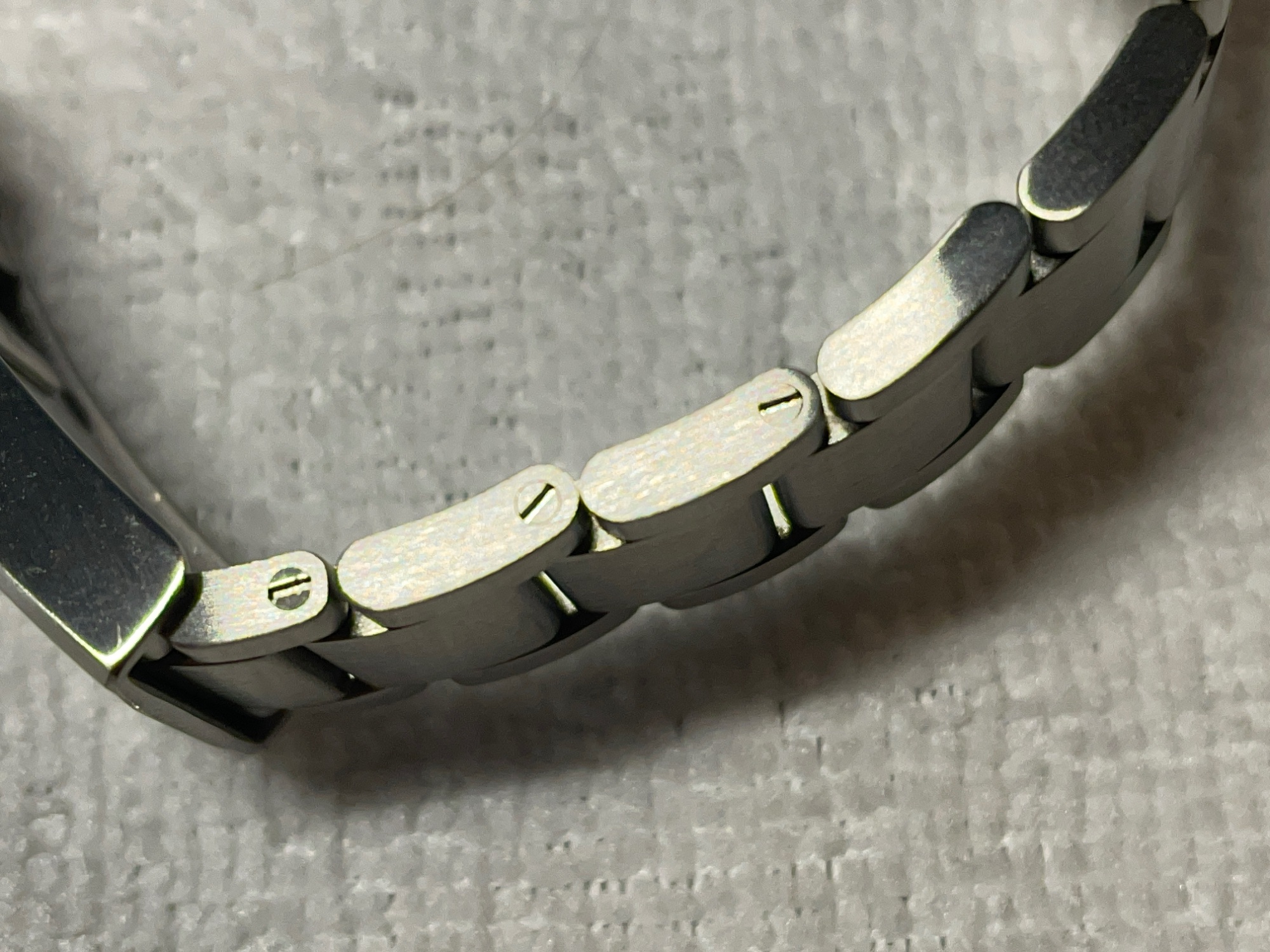 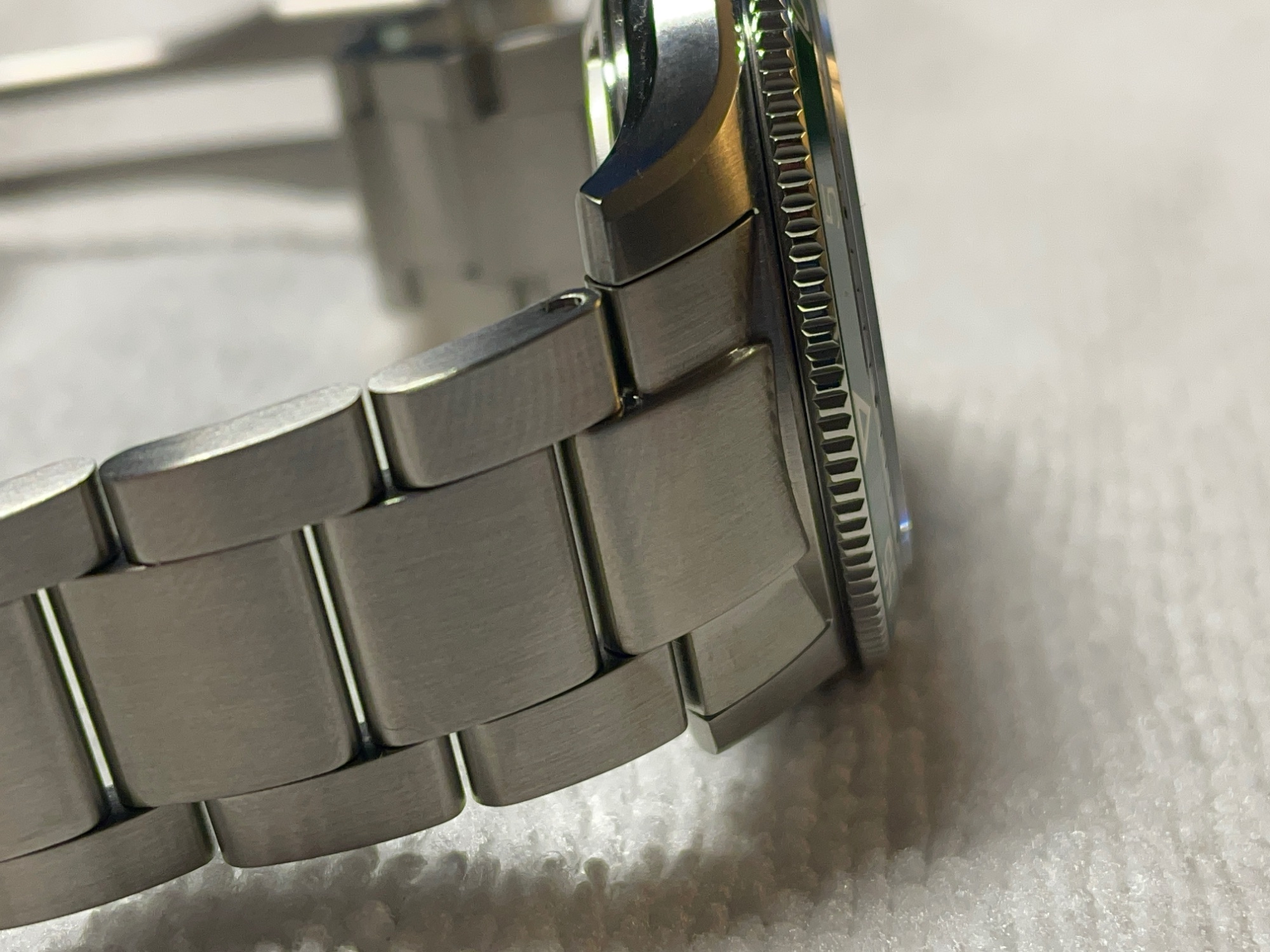 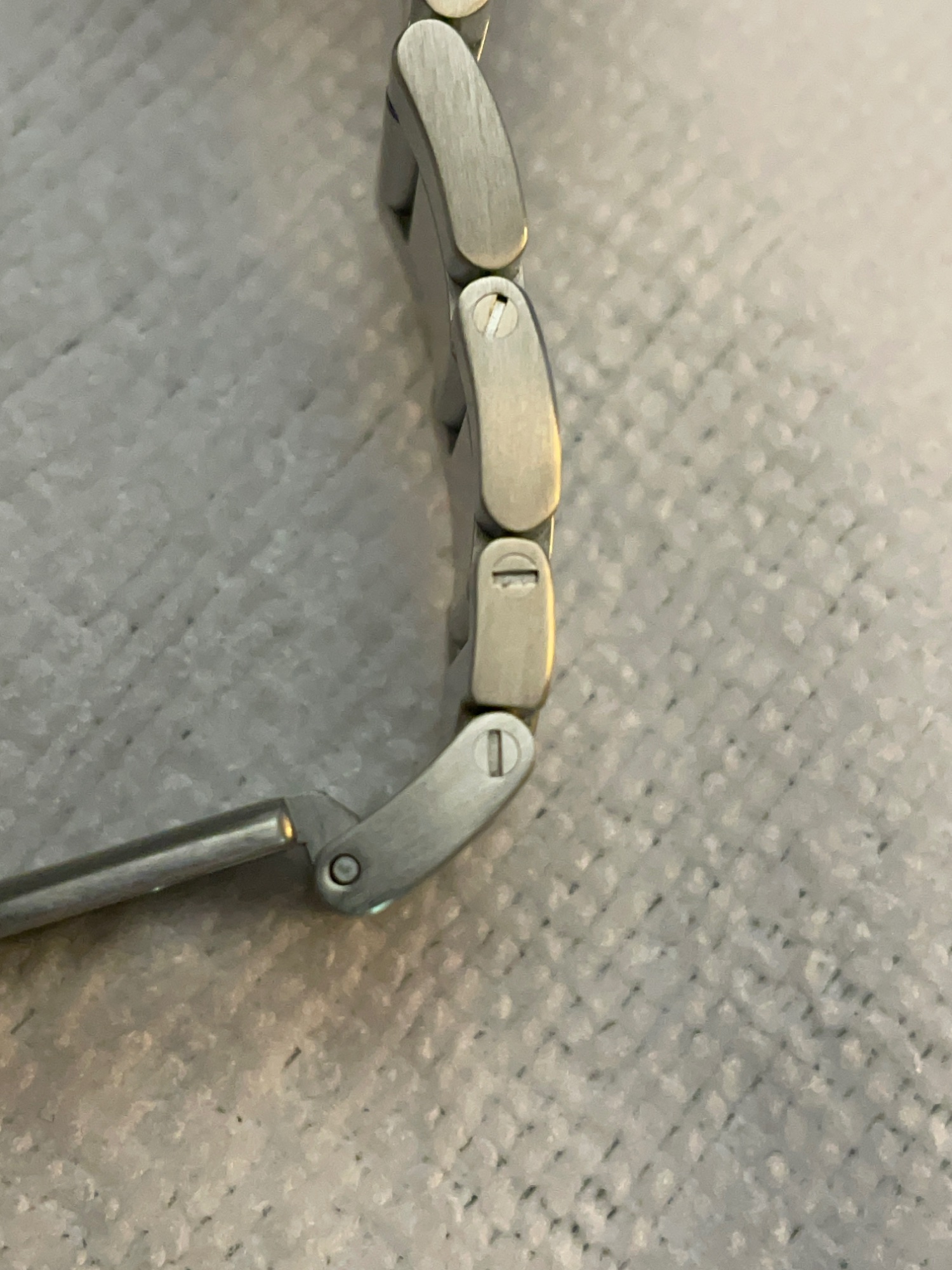 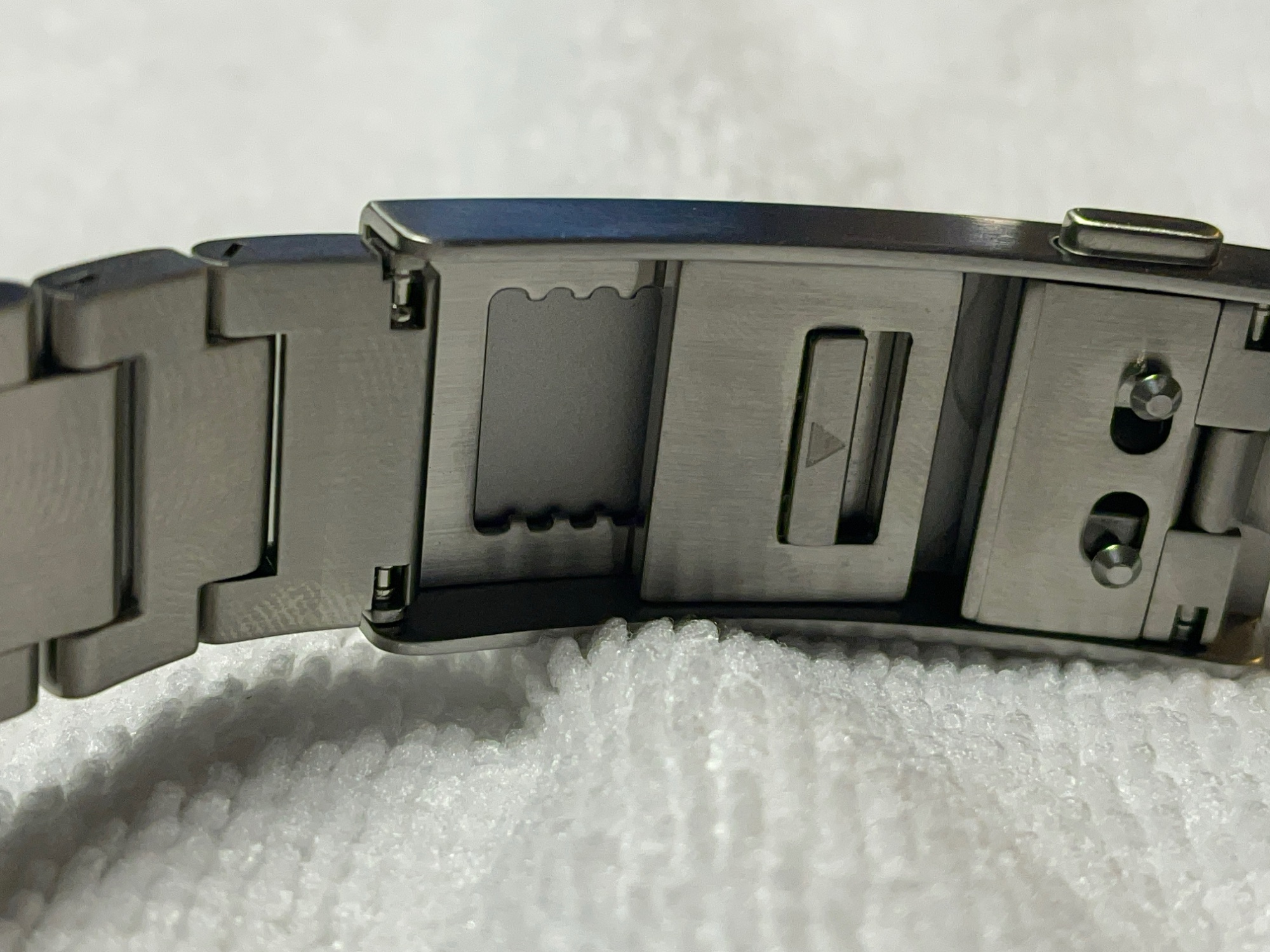 The watch feels nicely balanced and doesn't sit too proud on the wrist. It's weighty but not heavy. It is water resistant to 1,000 feet which isn't enough for me and my deep diving lifestyle I lead here in the middle of the US. I'm kidding, I can wash my hands with it on, it's fine.

^^^ thank you, helpful thoughts. I’m very much looking forward to seeing a 300 in the metal.

These users thanked the author Richard D for the post:
NationOfLaws

Fantastic write up, thank you!

These users thanked the author jkbarnes for the post:
NationOfLaws

Andrew
“In the name of God, stop a moment, cease your work, look around you.” ~ Leo Tolstoy

These users thanked the author welshlad for the post:
NationOfLaws

These users thanked the author NationOfLaws for the post:
welshlad 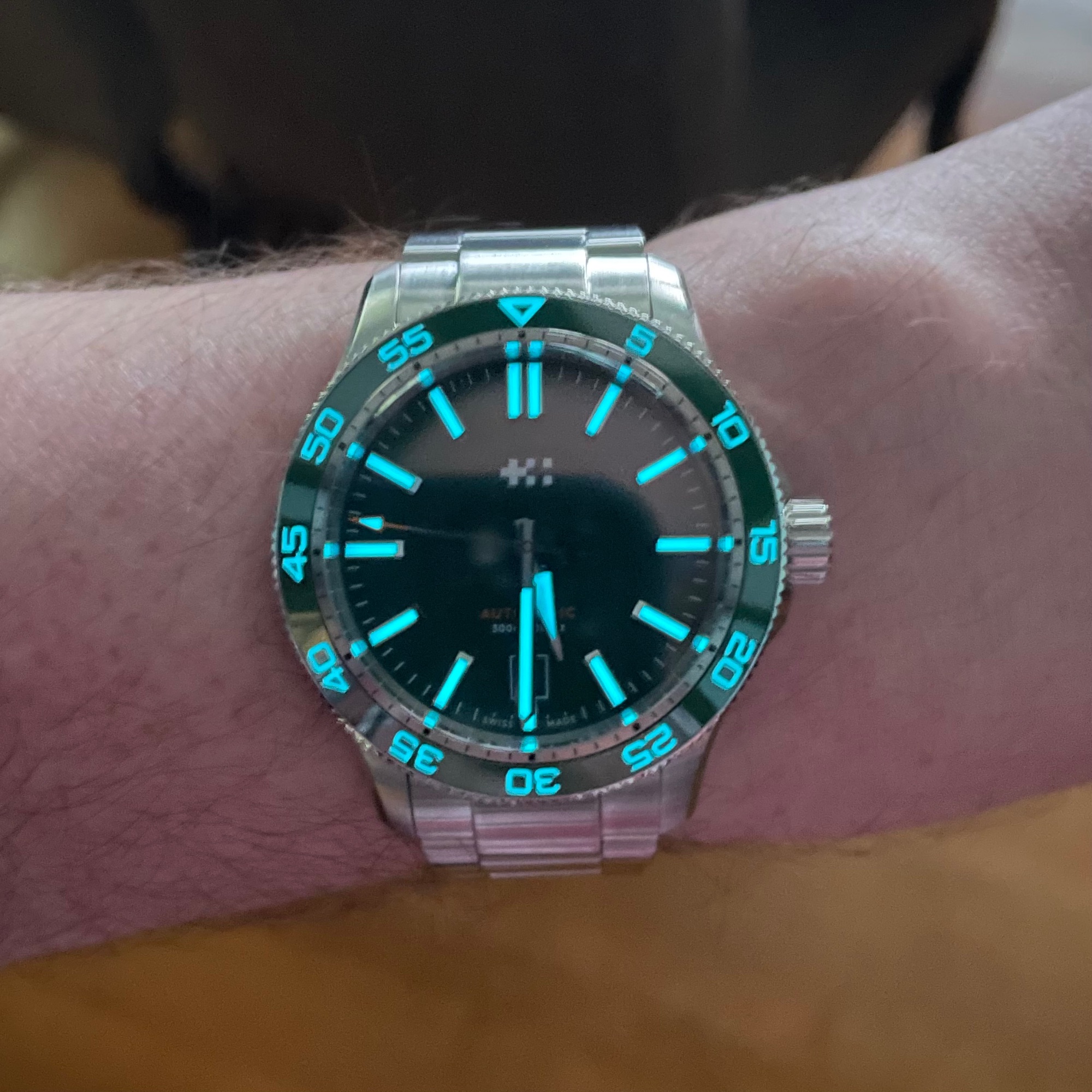 Thanks for sharing your initial thoughts. Do you think the lume is noticeably improved over other CW offerings or other watches? Just curious.
Top

I don’t really know. Maybe! I don’t pay attention to lume all that often because I am a troll who hardly ever leaves the house.

These users thanked the author NationOfLaws for the post:
WatchMeGo

I enjoyed reading that review along with the humorous flourishes. It elevated it beyond the ordinary watch review. In your lume shot the watch appears to wear bigger than a 40mm watch to me, guess it's the thinner bezel to dial area ratio?! Nice to read something positioned a little above the cromulent.

These users thanked the author strapline for the post (total 2):
NationOfLaws • Stif

Tested in five positions with no back play whatsoever.
Top

I think it feels about the same size as the Dartmouth. They’re only a mm apart size-wise but I think that bezel really does make it seem a little bigger than it is. Not in a bad way, in my opinion.
- Jameson

A great honest write up Jameson, thank you.

I'm interested in your comment of "The handset feels longer and skinnier to me than other CW watches.".

Perhaps they are compared to, say, the Aquitaine but my understanding from our Zoom Preview, is that the hands and indices are 10% wider than the C60 Trident Pro 600 to allow the use of more lume material.

What do you reckon?

God I cannot WAIT until my C63 36 arrives, just for that bracelet, that taper, the added microadjustments. Hopefully the screws on that bracelet are also one-side only (really dislike the 2-screw systems - looking at you GS). CW really created a nice competitive advantage for itself with their bracelets, I literally just chose that black dial C63 36 over a GS X261 HAQ last week, after I could sense at the boutique that I could not get a perfect fit with that Grand Seiko bracelet.
Top

I'm interested in your comment of "The handset feels longer and skinnier to me than other CW watches.".

Perhaps they are compared to, say, the Aquitaine but my understanding from our Zoom Preview, is that the hands and indices are 10% wider than the C60 Trident Pro 600 to allow the use of more lume material.

What do you reckon?

I’ll compare a bit later today once I’m up and about for the day. Might just be an error in perception

These users thanked the author NationOfLaws for the post:
Bahnstormer_vRS

Rikk shared a pic comparing the C60 300 side by side with the C63 and a C65 over on the C60 300 preview thread. Compared to the C63, the batons and hands do indeed look just a little bit thicker. Or maybe it’s just my eyes seeing what I want to see?

These users thanked the author jkbarnes for the post:
Stif

Andrew
“In the name of God, stop a moment, cease your work, look around you.” ~ Leo Tolstoy