Baco Noir wrote: ↑Mon Nov 19, 2018 11:17 pmI don’t see a significant mid-alignment. I may be a smidge off at the macro scale but I’d never notice it without a closeup and a box like you drew. I’d say it’s within acceptable tolerances imho.

But what is the definition of an 'acceptable tolerance'? The trouble for many of us, is that when you notice such an imperfection, it's always what your eyes are drawn to and can ruin the experience of owning the watch.

I still remember my one visit to the showroom and seeing the original Tridents and I was really impressed, until I noticed the positioning of the date window and that was that! Game over.
'Tis me
Top

I ordered mine the second they went live as it really is a great looking piece and i missed bronze after selling my previous piece.

Mine arrived sans wooden box, patinated (ordered raw) with pretty poor packaging and just a little pit of plastic stuck half way on the dial.

No marks, no wonky dial markers (that i can see by naked eye) and luckily no red paint.

I did bring this all to CW attention as I had bought this as birthday present to myself and asked them to delay it until then so after 2 weeks was a little disappointed by all this. Their response was beyond poor and I have informed them of this.

However, after a few back and forth they did provide an apology and offer to send a wooden box out to (generally didnt care, but its on its way so kudos), to take the back plate off (so i keep the serial number) and put it on a new piece and basically give me what i should of got when i ordered.

I find the above solution to honestly be a good solution and good customer service. I didnt take them up on their offer as I believe there is too much to go wrong when really it was the presentation rather than the piece itself and something that i have now got over

I dont mean this to be seen either as negative or positive as i think this has both, just merely wanted to share my experience.

It wont stop me buying CW, as like others have said you can always return it.
Matt
Top

The Ombre is my first CW, and in fact my first diver. Typically they haven't really appealed, although I've always loved the trident counterbalance and as much as the 43mm size concerned me, the bronze case, matte black ceramic and the distressed dial were too much to resist

I have 088/300, which was bought raw on the brown leather strap and has developed quite a nice patina already.

As a new CW customer I will say the buying process was very good, support was quick to respond and it is comforting knowing there is the refund policy available.

When the watch arrived, the box was clearly not new, in fact it was pretty scuffed to be honest but I wasn't overly fussed by that. I'd (perhaps mistakenly?) read this forum before it arrived, so I was very thorough looking over it before removing the protective plastic as I didn't want to affect the ability to return it (if the 9 index bothered me for example).

This and the box possibly dampened my initial 'wow' of seeing the watch as I was looking for flaws, and then upon inspection there was a small 'dent' at the bottom which meant I spent a good 10 minutes deciding whether I wanted to return it, which again somewhat took the shine off the experience. Pic below for reference.

Dent in bottom of case

Overall, I decided that I bought this watch as a daily that would look better once weathered, so the small dink in the bottom would soon be irrelevant. The 9 marker is possibly ever so slightly rotated (as in the earlier screenshot), but honestly I don't think it is something I would have noticed, and even looking at it it's incredibly minor and hasn't effected my enjoyment of the watch.

Having now had it on for nearly two weeks, I have no regrets in keeping it (other than seeing the £150 off voucher code the day after ordering!) and am really looking forward to seeing how it develops over time. The experience has possibly tempered my enthusiasm for buying additional CW watches in the future, but I'm sure there'll be more that prove irresistible!

A quick picture as it looks now 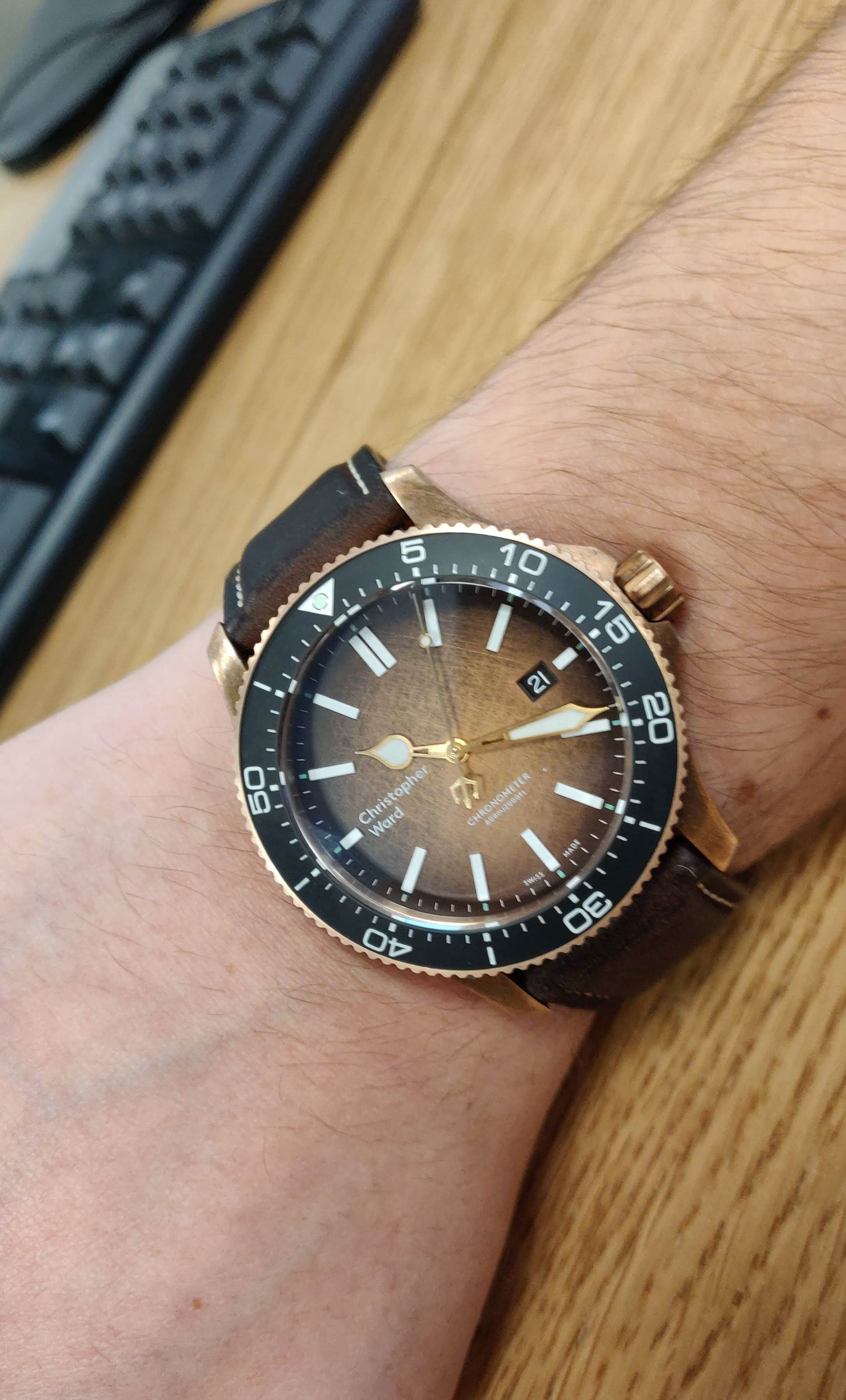 Apologies for the 'wrong' wrist

^^^ Congratulations, and welcome to the forum.

I took advantage of the BF15 and ordered one a few minutes ago.....

From my showroom visit the ombre may well be very close to sold out. It was a surprise hit for CW and I hope they keep making similarly adventurous pieces in the future.
Mark
Bremont, Casio, Citizen, Christopher Ward, Omega, and Oris
Top

I still prefer the prototype version of the Ombre that I saw at the Showroom.
Top

I was very surprised to see an email this morning that my watch has already been shipped. On a Saturday.

Lawrence wrote: ↑Sat Nov 24, 2018 6:01 pm I was very surprised to see an email this morning that my watch has already been shipped. On a Saturday.

CW have upped their game on this recently and, for example, at major sale times will have ALL staff working to dispatch orders.

A photo showing the trio together would be great.
Ferg

A photo showing the trio together would be great.

Well I don't have the C60 Trident GMT 600 but I guess I now have all three, basically.

I will post a photo when the latest arrives. We're in the midst of a postal disruption but it will arrive eventually.

Looking forward to the photos

Mine's at the Royal Mail LANGLEY HWDC and on an airplane soon I expect!

Obviously the patina is the big part of the allure with bronze, so I thought I'd try to keep a bit of a record as to how it progresses. I'd sort of hoped to maybe even do a bit of a time lapse of it progressing, but I'm just not that organised!

It's actually a slower process than I expected which I like, so I'll just go from new to how it is now. Not quite identical angle, but you can't have everything.

As it stands today, 28th November

It’s warming up nicely and it depends on your climate, that seems pretty fast to me.
My name is 0uatiOW, but before you ask, no I don’t.
Top
Post Reply
182 posts